Home Columnist I don’t want to die, alleged killer of Ataga cries out 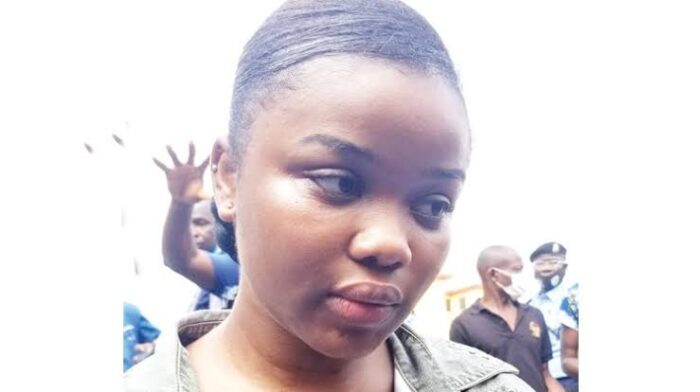 With investigation still ongoing into the circumstances surrounding the death of the Chief Executive Officer, Super TV, Usifo Ataga, the prime suspect, Chidinma Ojukwu, during an exclusive interview with Sunday PUNCH on Saturday, said she doesn’t want to die over the case.

“I was just trying to comport myself to answer questions during the parade and not that I am not showing remorse. I totally regretted everything I did and I am sorry. Mr Ataga’s family, I am deeply sorry for what I did. If I had my life back, I wouldn’t do anything like that. I am deeply sorry and I hope you forgive me.”

Chidinma and Ataga reportedly lodged in a service apartment in the Lekki area of Lagos State and the corpse of the latter was discovered the next day in the room and the former fled, thus raising suspicion of her complicity in his death.

The police said they went after her and tracked her down at her father’s Alagomeji, Yaba residence.

Upon her arrest, Chidinma attributed her action to the influence of hard drugs and alcohol.

Speaking while being paraded by the police, Chidinma said she met the late Ataga about four months ago. Chidinma also said that she and Ataga were “having fun” when an argument broke out and she stabbed him twice after which she withdrew N380, 000 from his account using his ATM card.

The police had also disclosed that an Information and Communication Technology unit recently created by the state Commissioner of Police, Hakeem Odumosu, tracked the suspect, who used different SIM cards– both Nigerian and foreign ones.

Chidinma said her parents separated when she was two years old and she started living with her uncle, Chijioke Obi, in the Mushin area of Lagos State.

She added that while growing up, her childhood ambition was to become either a musician or an actress.

The suspect stated, “My role models were Tiwa Savage, Beyonce, Rihanna, Genevieve, and Regina Hall. I schooled in Johnson Primary School and also a government primary school in Mushin. I later went to Sidman College in Sabo, Yaba. I was two-year-old when my parents separated, I was little, so while I was growing up, I stayed with my uncle, Mr Chijioke Obi, in Mushin. I don’t know if he bears Izu, but it was my uncle that trained me.”

Upon completion of secondary school education, the suspect said she gained admission to study Mass Communication at the University of Lagos.

Asked about her assumed drug-induced lifestyle, Chidinma said, “I started smoking after I got into UNILAG.”

She also confirmed she’s the person in a trending video showing a lady puffing out cigarette smoke while soft music plays in the background.

She stated, “I am the one smoking in the trending video. I started smoking a few years ago. Old-time friends introduced me to it and we don’t talk anymore. Everything started after I entered UNILAG, but not actually when I am in school, it could be other places. But I am not the one in the other video (dissociating herself from another trending video showing a lady exhibiting her butt).”

On her relationship with Ataga, Chidinma described him as just a friend she met a few months back, faulting claims that he neither took hard drugs nor alcohol.

Narrating some of the moments she spent with the deceased, she said, “Mr Ataga was a friend and I don’t know how to elaborate more. He has not shown me pictures of his family but he sometimes acts like he was married and not that he is married (sic). I have met him up to four or five times; he takes drugs and drinks alcohol. It is not that I am trying to put anything together.’’

Also, the police said that on Thursday they released Chidinma’s father and the operator of the apartment where the incident happened, Mrs Nkechi Mogbo, on bail. The suspect’s father was arrested over what the police described as obstructing the arrest of her daughter while Mogbo had been in police custody after investigation identified her as the operator of the apartment.

Odumosu said, “Chidinma’s statement exonerated her father as she said that he was not aware of the incident. We released him. Also, the lady in our custody, one Mrs Nkechi Mogbo, who leased the flat from the property owner and used it for a service apartment, has been released on bail.

“After Magbo was arrested, she assisted the police because of the information she gave us. Now that we got the principal suspect, and the fact that the principal suspect confessed that she singularly committed the act, and equally went further to explain that she never met Nkechi Mogbo, but that she only phoned her and that they transacted all the business online, I have ordered her release on bail while we continue our investigation.’’