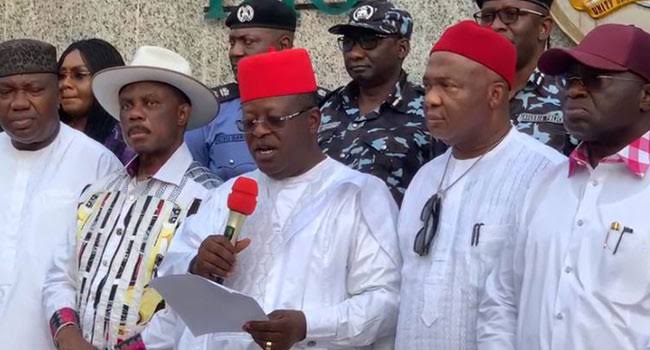 Leaders of the South-East, comprising governors, politicians, religious and traditional leaders rose from a meeting in Enugu on Saturday and disowned the Indigenous People of Biafra and all pro-Biafra agitators, saying all the secessionist groups don’t speak for the region.

However, the governors and others warned security agencies in the region against the alleged killing of Igbo youths in the quest to arrest criminals causing chaos in the region.

In a related development, Ekiti State Governor Kayode Fayemi on Saturday said secessionists in the various parts of the country were only taking advantage of the parlous security situation of the country without considering the consequences.

The governor said the divisive rhetoric by the agitators were part of a grand plan to destroy Nigeria.

In the South-East, the leaders’ meeting on Saturday was a follow-up to the consultation the presidential delegation, led by the Minister of Defence, Major General Bashir Magashi (retd), had with Igbo leaders on June 11, 2021 on insecurity in the region in particular and Nigeria in general.

Reading the resolutions of the South-East leaders on Saturday, the Chairman, South-East Governors’ Forum and Ebonyi State Governor, Chief David Umahi, disowned all secessionist groups in the region, including the Indigenous People of Biafra.

The leaders also assured all Nigerians living in the South-East that they had no reason to fear or leave the region.

Umahi in the same vein appealed to leaders of other regions to ensure the protection of the Igbo people living in their regions, noting that they had uncovered some threats against Igbo living in other parts of the country.

The leaders’ communiqué read in part, “Arising from the meeting of June 11, 2021 with the presidential team led by the Minister of Defence, Major General Bashir Magashi (retd), we the South-East people agreed to a further meeting with them as requested by them.

“Consequent upon that, we scheduled our own meeting today, June 19, 2021, to enable us to discuss as brothers and sisters and articulate our positions to enable us to not only engage the presidential team but to also engage our people over all burning issues.

“We the Igbo do reaffirm our commitment to a United Nigeria under the platforms of justice, equality of rights, fairness, love, and respect for one another.

“We condemn in totality the activities of violent secessionist groups in the South-East and elsewhere. We firmly proclaim that we do not support them and they do not speak for the South-East.”

The leaders rejected the impression that they had been silent over the agitations for secession in the South-East, describing the notion as incorrect.