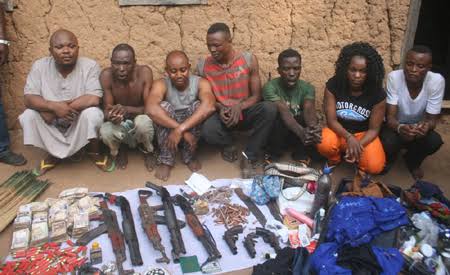 Three options – ransom, amnesty for bandits and de-radicalization for repentant Boko Haram fighters. The three of them appear to me like a diabolical trio, but for their sponsors they seem to represent the ultimate elixir that will spell the end of security challenges in the country.

Payment of ransom for kidnapping, though desperately but unconvincingly denied by government and police, is virtually the oxygen that keeps the evil industry going. Now that these bandits, more of them in the North, have escalated their operation to schools, the so-called soft targets, only God knows how much money they have harvested in the last six months and still counting.

From December 2020 to the first quarter of 2021, a total of 769 students have been kidnapped from various institutions of learning in the North alone starting from Kankara Secondary School close to Katsina to Kagara in Niger State and Jangebe in Zamfara State. And they have now berthed in Kaduna State where in one fell swoop they carted away 39 students of Federal College of Forestry Mechanization in Afaka.

On April 20, a few weeks after the Afaka episode, they visited Greenfield University, a private institution also in Kaduna State and made away with 23 students and teachers. To show that they were not on a picnic, they killed three of the students in their custody because the ransom they demanded was not easily forthcoming. The uproar that greeted that heinous murder had hardly died down when two more bodies of the student captives were found not far from the institution. In all, they had killed five students of the university.

But they now raised the stake. The N800,000,000 ( eight hundred million naira) ransom they demanded must be paid within two days or they would kill the rest of the students.

With this threat, a nation that was perilously on edge was now dangerously on the tenterhook. I can’t imagine what the authorities were going through but for the parents and other relations, it was their worst nightmare ever.

Were these hoodlums, already steeped deep in blood, going to make good their threat and massacre the innocent students? Somehow, most mercifully, God seems to have touched their hearts with the intervention of Sheikh Abubakar Mahmud Gumi and others who have managed to find favour with the bandits from Niger to Zamfara and now Kaduna. They have mellowed down for now while negotiations continue.

Meanwhile, the trauma of the parents is at stratospheric high. Former President Olusegun Obasanjo, an advocate of the carrot and the stick, had collaborated with Gumi to set the Afaka captives free.

With Greenfield, according Gumi, they are facing some peculiar difficulties because of the Boko Haram involvement. They say that the bandits or, whoever they are, have problems not with the students but with the scorched earth approach of Governor Nasir El-Rufai who has vowed not to do business with them. Governor El-Rufai, like President Muhammadu Buhari, has sworn not to negotiate with kidnappers and murderers. Payment of ransom is therefore out of the question. But these student captives are merely the suffering grass in the proverbial fight between the two elephants.

It is in the midst of this horrendous national tragedy that Senator Ezenwa Francis Onyewuchi from Imo State brought his controversial amendment to the terrorism bill to make payment of ransom a criminal offence. The bill, titled Terrorism Prevention (Amendment) Bill of 2021, has scaled through the second reading. The bill which seeks to substitute Section 14 of the Principal Act reads thus:

“Anyone who transfers funds, makes payment or colludes with an abductor, kidnapper or terrorist to receive any ransoms for the release of any person who has been wrongfully confined, imprisoned or kidnapped, is guilty of a felony and is liable on conviction to a term of imprisonment of not less than 15 years.”

This sounds like good music in the ears of those who have reasons to oppose payment of ransom to kidnappers. The dilemma that payment or refusal to pay ransom poses has not been addressed by the proposed bill. Those who oppose payment of ransom like the United States of America, for example, do so on principle and they are well equipped to rescue their citizens from the den of kidnappers anywhere on earth.

In our own dear country, kidnapping, which has already assumed the status of a growth industry, will, if unchecked, replace all other businesses. It may not be decent but it is the most lucrative of all businesses. But any society that depends on this dastardly means of earning a living certainly has no future.

Today, we know what insecurity has done to our socio-cultural values and the economy at large. If insecurity is not stamped out now or soonest, I can bet the last kobo in my pocket that foreign investors would turn their back on us for as long as we live in this jungle of uncertainty and famine will cause a major havoc. The bill may be well intentioned, but unfortunately it is silent on what to do to prevent kidnapping or to free those unlucky enough to be kidnapped. No relations of the kidnap victim would gladly leave his relations to suffer and die in the hands of the blood sucking vampires that live on the fortunes or misfortunes of other people.

Ransom has a dubious efficacy in this bloody business. Unfortunately, so too is the so-called amnesty for bandits. You give amnesty to a bunch of confessed criminals who have maimed and tortured fellow human beings, kidnapped and raped their wives but are now allowed to go scot free with admonition to go and sin no more. And they go with compensation to boot.

As exemplified by the Zamfara case, amnesty had been declared and celebrated before the 300 school girls of Jangebe Government Girls Secondary School were forcefully taken away into the forest and were not released until ransom was paid.

Amnesty has the same dubious utility as the so-called de-radicalization programme for the so-called repentant Boko Haram fighters.

Believing that the worst days of Boko Haram were over, our gallant troops having sufficiently decapitated the insurgents and their fighting spirit effectively subdued, government and the military thought that it was time to show some leniency for those who were misled into taking up arms against their fellow human beings.

This resonated well with the magnanimous spirit of the commander-in- chief, President Buhari. He gave his approval for the rehabilitation or de-radicalization of repentant Boko Haram fighters. They would now be sent back to their families to be re-integrated into the society that was yet to fully recover from the trauma of the devastation their misguided ideology had caused.

I was apprehensive and I said so in my column of December 6, 2018. I had cautioned against hasty de-radicalization and re-admission of the so-called repentant Boko Haram back into the society. I urged that the military authorities, from the commander-in-chief to the field commanders, must not do anything to lower the morale of the fighting men who were sacrificing their lives so the country would know peace.

The second batch of 155 rehabilitated men was reintegrated into society a few weeks before the Metele tragedy of November 18, 2018 during which the Boko Haram fighters outwitted and dislodged men of the 157 Task Force Battalion in Metele, Borno State.

Armed with superior intelligence and sophisticated equipment, they effortlessly inflicted maximum casualty on our troops killing their commanders and senior officers. This tragedy might have nothing to do with the repentant Boko Haram fighters but the ease with which the enemy troops, like well-practiced con artists, deceived our professional soldiers was suspicious.

This should caution us henceforth against any hasty embrace of repentant bandits or kidnappers. Amnesty should come after victory or surrender. Not before then, because most of the time the left-handed man does not forget his left hand.