Home Columnist 2023: A pathway to an Igbo president 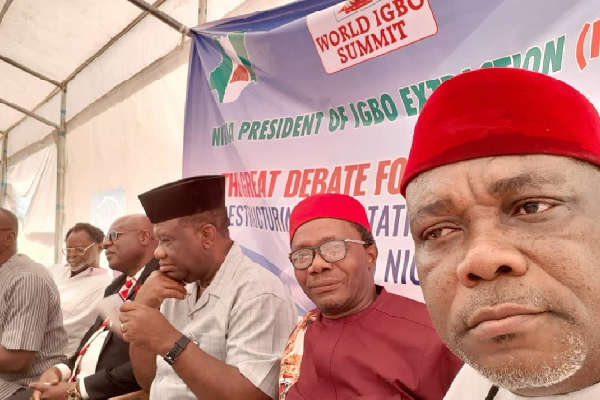 Before getting to the point of this column, I have to indulge you with this caveat: I have been writing this column for quite a while, and not once has anyone told me that it’s out of place for a Nigerian living abroad. Well, the Deputy Speaker of the House of Representatives, Ahmed Wase, just said so, albeit unwittingly. The honourable gentleman jolted me when he told a petitioner, in effect, that Nigeria is none of the business of Nigerians living abroad.

It was all there on Arise News. At a sparsely attended NASS session, a man was tendering a petition on behalf of a US-based association of Nigerians. The petition calls on the government to do what is necessary to stop the incessant banditry, kidnappings and murders in Benue, Nasarawa, and Taraba states. Wase dismissed the petition, claiming the group had no standing to make such a petition because the members live abroad.

The hosts of the TV programme attributed the ludicrous claim to intellectual shortfalls. That may well be the case. But I’m inclined to blame the psychology of ethnocentricity and entitlement. They have in common the attribute of reserving privileges for a few and excluding the rest. The honourable representative just stretched the ethos beyond logic, logic that implicitly bears on the point of this column.

Two Sundays ago, I made a mathematical case for ceding the 2023 presidency to the South-East, in effect, to the Igbo. One reader who posted on the article declared emphatically, “What an Igbo write up!” I am actually a South-South Ijaw. Another reader, who identified himself/herself only as TA, declared that “this writer does not know Nigeria.” TA argued that the Peoples Democratic Party is more concerned about winning back the presidency than rotating it to any zone. As to the All Progressives Congress, TA argued that Asiwaju Bola Tinubu has worked too hard and brooked too much to cede the presidency. The “logic (of the article), if any at all, is too faulty and delusional,” TA declared.

Well, of course. In a country where the Deputy Speaker says that citizens who live abroad should have no say in the affairs of the country, it has to be delusional to argue that Nigeria’s third largest ethnic group should be given a chance at the helm. In any case, the argument for that is already made. Here, I go further to suggest how it could be done.

Actualising an Igbo presidency has to begin with an Igbo consensus. No, I don’t mean a consensus among all Igbo or even South-East Igbo. Rather, it is a consensus within each of the two major parties, the APC and the PDP. In event another major party emerges by 2023, the suggestion would extend to it. Igbo candidates so chosen would force the various parties’ chieftains to look in the political mirror with a national sensibility. The question the mirror would pose is a simple one: Is it in the interest of Nigeria’s unity for an Igbo to be elected president at this juncture of history?  The party chieftains will be hard pressed to answer No. In which case the respective major parties will nominate an Igbo for the general election. And that will all but guarantee that an Igbo will be elected president.

Other than guaranteeing an Igbo president, the nomination of an Igbo by the major parties also eliminates the matter of advantage. A major argument against nominating an Igbo is that the party that does it may be at a competitive disadvantage if other major ethnic groups coalesce around another party. With this approach, that concern shouldn’t arise.

If there is any certainty in Nigeria’s national leadership since independence it is the recycling of the same people. Commitment by the APC and PDP to nominating an Igbo for president presents an opportunity to veer from that pattern.  Democracies around the world are doing exactly that. Angela Merkel, who holds a Ph.D. in quantum chemistry, might never have become Germany’s Chancellor at age 50 if the Germans operated by the old guard system. Merkel went on to become Europe’s most powerful leader for about 16 years.

Barack Obama would not have experienced his meteoric rise from a political canvasser in Chicago to the president of the United States within a few years. And Emmanuel Macron would not be France’s president. I am inclined to cite Canadian Prime Minister Justin Trudeau as another example. He was only 44 when he assumed office in 2015. But then the case could be made that he inherited some old-guard coattail from his father, Pierre Trudeau, who was prime minister in the 1980s.

And talking of the 1980s, what better case can there be for casting the leadership net wide than what happened to the Soviet Union? Some might see this as a counter example, but it isn’t. What democracy there is in Russia and Eastern Europe today is creditable to Soviet Communist leaders’ decision to veer from the usual and make a relatively young Mikhail Gorbachev president. Sure, his political and economic innovations led to the breakup of the totalitarian Soviet Union and the Warsaw Pact. But they were an uneasy union and a forcibly maintained alliance that they were bound to disintegrate anyway — with much bloodshed.

Back to Nigeria, what each major party needs is a competent, principled and charismatic Igbo man or woman to be their flagbearer in 2023. That can’t be difficult if the parties cast their nets wide enough. The parties don’t need someone with the political gravitas of Bola Tinubu. For the PDP, I don’t see how the party could go wrong nominating Peter Obi. His record as governor of Anambra State was stellar, as he exemplified and articulated governance principles that Nigeria sorely needs. Most important are thrifty use of public funds and a frugal lifestyle.

Both parties could also do well to go after Mazi Sam Ohuabunwa, the former Pfizer executive who recently announced his candidacy under the newly-formed party New Nigeria Group. Though at 70, Ohuabunwa exceeds the age range I had previously advocated, in political terms he is a new guard. His stellar career in business and related leadership makes him the right type of political outsider to lead Nigeria at this time. But then Igbo socio-political groups such as Ohanaeze are in a much better position to recommend ideal candidates.

Just so there’s no misconstruing, the case for an Igbo president is about political justice and prudence. It will not end Igbo disenchantment with Nigeria or the secessionist agitations, as Ohuabunwa reportedly claimed in announcing his candidacy. But it will certainly take some wind off the separatist fervour as happened with Niger Delta militancy after the election of Goodluck Jonathan. Contrarians may point to an opposite outcome: Fulani insurgency and herdsmen killings intensified under a Fulani president. But that’s because their cause is nebulous and hardly redressable. In contrast, the Igbo have genuine grievances, though amplified by their echo chamber. An Igbo presidency will change the reality and temper the perception.