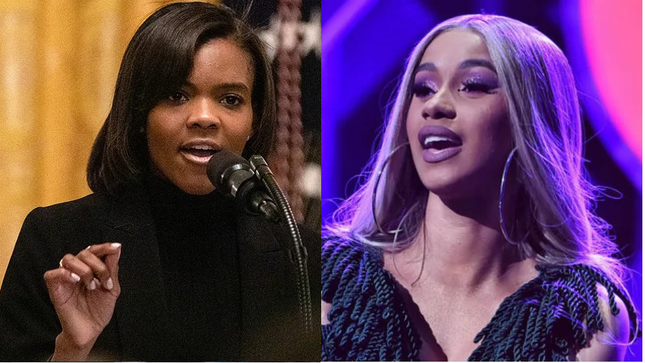 Rapper Cardi B, real name Belcalis Marlenis Almánzar, appears to have scrubbed her account of tweets that contained a doctored tweet and false claims about Candace Owens, as well as some other tweets attacking the conservative. The move comes after Owens publicly threatened to sue the musician for libel.

At least three of the tweets that have been removed from Cardi’s Twitter account included screenshots of a fake tweet and false blog posts about Owens and her family.

Captioning a photoshopped tweet designed to look like it was posted by Owens, Cardi wrote, “Not you talking about two women thrusting their vaginas together while your husband and brother slap c***s and b***s together .WELL WOULD YOU LOOK AT THAT !wow.”

The fake tweet read, “Yes, my husband did cheat on me with my brother. Yes, he said no when I asked to join them.”

The tweet has been removed, but The Daily Wire captured a screenshot:

In another now-deleted tweet, Cardi insisted the photoshopped tweet was not fake. “This wasn’t photoshopped you was trending the whole day when you tweeted this and it was published on a lot of blog outlets,” the celebrity claimed. “Your right mine sleeps around yours sleeps at yours sleep at your home with your brother C*** BOXING while you tweet me.”

Standing by her false claims, the “WAP” singer posted more screenshots and claimed they were real because they are found on the Internet.

“Not you being mad at me for WHAT YOU TWEETED AND is published on public blogs,” she wrote. “I ain’t made it up honey Google it yourself.”

“This looks like a random blog that seems to have been dumb enough to have fallen for a photoshopped tweet,” Owens responded to Cardi on Tuesday. “You tweeted that the photoshopped tweet was real and you saw it on a day that I was trending—which is a lie. You made that part up to help circulate a slanderous lie.”

“FYI I DO have a brother, a private citizen, who you are slandering right now with this photoshopped image that you are now publicly claiming you saw tweeted in real life,” the “Blackout” author said. “You want to admit you lied now, or get sued so I can expose you as a liar? I win either way.”

Later on Tuesday, Owens announced that she would “100%” be suing Cardi for the false posts.

“Yes. Just spoke with my family. I am 100% suing Cardi for that nonsense,” Owens tweeted. “You can’t just start throwing out wild lies against private members of my family because you’re upset someone called [you] out on your degenerate performance. I‘ll keep you all posted.”