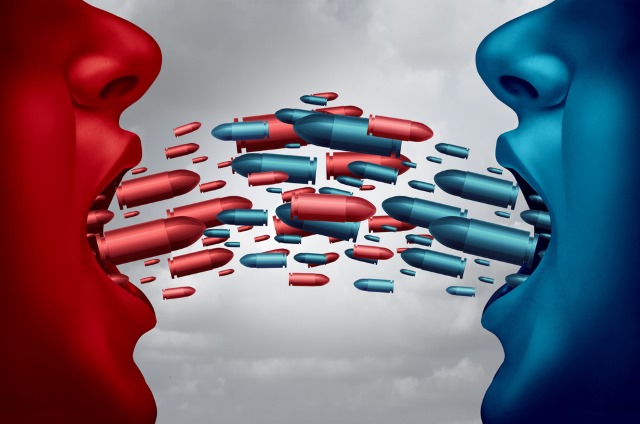 Even as figure of speech, I had thought this business of the tongue being a monster or a man’s most dangerous enemy was in the exclusive remit of literature.

That was until I chanced on Kano State’s Governor Abdullahi Ganduje’s rationalization of the sacking of Sanusi as emir of Kano. Part of the erstwhile emir’s problems, according to Governor Ganduje, was that he talked too much. But as an intellectual and social critic, the governor said he could understand that Sanusi had a right to his views and could express them in any manner he deemed fit.

But as he put it  graphically on Channels TV, this garrulity was no  longer sustainable and  tolerable once   he became emir; because  he was no longer an ordinary person.

To illustrate the danger of talking too much, Ganduje extravagantly demonstrated  with the expansive use of his hands. He said “ this tongue is the most dangerous enemy of man. For a politician, his tongue is his most dangerous enemy.”    Once you have spoken in a manner you should not speak, you cannot take back your words and they will live to haunt you.

What came to mind  immediately was the fate that befell Banquo, friend and ally of  Macbeth. Both of them were returning from a victorious battle and both  were accosted by three witches who hailed them and predicted that Macbeth was going to be king as a result of his valour.

They didn’t speak to Banquo. But he challenged to speak to him if they could look into the seeds of time and tell which would grow and which would not. He was given the prediction that he would not be king but he would be a father to a line of kings. Macbeth, the war hero who was about to launch himself into celebration mode felt that these weird sisters had dampened his enthusiasm; he felt these fellows who were “ so withered and so wild in their attire” had put on his head a fruitless crow. His children would not succeed him. To reverse the prophecy, he plotted and killed Banquo though his son, Fleance, survived to fulfill the prophecy.

Literature reviewers and commentators  are quick to conclude and most appropriately, in my view, that “ accursed is the mouth that chatters when it should be shut.”

In the real world, this classical Banquo treatment has become the flagship of all dire consequences of careless utterances and the fate of those who talk first before they do the thinking later.

The current situation in Nigeria which is  akin to a season of madness has robbed  otherwise eminent and sensible men and women of their God-given faculty for reasoning. Nobody seems to give any serious thoughts to what comes out of the mouths any more – and  this can be a prelude to a national catastrophe?

Before we say God forbid,  we must not allow our sorry situation to continue to spew out   jarring  but explosive inanities  –  the   Ganduje example of the tongue being the metaphor for a dangerous, self- destructive  missile.

That goes for  Governor Bala Mohammed of Bauchi State and his allusion to the inevitability of the use  AK47  which later metamorphosed into a  figure of speech.

When the state of insecurity climaxed late last year with abduction of students  in Katsina State and the spike in the kidnapping and killing of farmers and prominent citizens of the South West zone, it was like the country now had its back on the wall. And flowing  from that was the national consensus and spontaneous declaration that enough was enough.

Ondo State Governor Rotimi Akeredolu gave quit notice to illegal squatters in the state’s forest reserves which decision was translated to mean herdsmen, majority of who are Fulani had been asked to go. At the same time Oyo State was driven to a state of frenzy when similar notices were served on Fulani herdsmen. Apparently filing the security void, a political thug now turned an ethnic irrendentist, Sunday Adeniyi Adeyemo, alias Sunday Igboho took on himself the task of leading the operation to clear the state of the herdsmen believed to be the masterminds of the kidnappings and killings in the region.

Reactions from the North took various forms from condemnation of ethnic profiling to threats of retaliation with some people calling for the arrest of Sunday Igboho. All the actions and reactions were like a throw-back to the days of infamy in Nigeria when the war clouds gathered for the civil war in 1967. Some governors like Bala Mohammed of Bauchi State actually lost their temper. While many of his peers in the North were looking for how to make space available for the expelled herdsmen, if it eventually came to that, Governor Bala on prime-time Channels television programme, was seen and heard displaying anger not commensurate with his high office and  sounding as if  justifying the use of AK 47 by the herdsmen.

He said  that with the society and the government not helping them, the herders, being profiled  as criminals, had no option than to use AK 47 to defend themselves. Apart from reacting to his South West counterparts, especially Akeredolu and Governor Seyi Makinde of Oyo State, he also took the battle to the war weary Samuel Ortom of Benue State whose Tiv people, he said , had been  living peacefully and doing their farming in parts of Bauchi State for centuries unmolested.

The ding-dong brickbat started to generate more serious, if not more dangerous backlash against Governor Mohammed. In the attempt to push back the attacks, he gamely but ineffectively explained away the use of AK 47 as a metaphor, indeed a dangerous figure of speech.

First to defend him were his media aides. What the governor said, according to them was simple. These people ( the herdsmen) who “ in the absence of any protection from the security agencies are forced to resort to self- help to defend themselves, their means of livelihood and their own lives.”

They also took the trouble to remind their principal’s antagonists: “ As a constitutionalist, Governor Mohammed will be the last person to advocate a subversion of the constitution of the Federal Republic of Nigeria.”

To clear all doubts, the governor himself  went back to Channels to  explain what he really  meant and how his enemies twisted his meaning. He said “ I was not advocating the use of AK 47. Ak 47 is a figure of speech. You must protect yourself, self-help. It is a figure of speech to show you the despondence, the desperation and the frustration and the agony  that  this particular person is exposed to by his own people, by his own tribe and by other tribes who have all seen him as a criminal and therefore he has the inalienable right to protect himself.” Exact words of the governor.

It is a pity. But we must accept his explanation and show sympathy for his clear inability to wangle his way out of the mess which an intemperate utterance borne of anger  brought on him. But one of his “ brothers” who has remained inconsolable is Governor Ortom.  The two gladiators are still at war.  Governor Ortom wants Mohammed to publicly apologize and prove that he is not one of the  terrorists that plan to assassinate him. He says he is life is in danger and has put the public on notice.

We are getting into more trouble with insecurity and the inability to find an easy way out of it. One consequence of this is that one-time treasonable utterances have today been officially sanctioned as appropriate defence mechanism against bandits and terrorists.

In February  2018, former Army Chief of Staff and former minister of defence, General T. Y. Danjuma told his people to defend themselves if security  were not protecting them. He drew flak from government.

Today governors are now urging their people to defend themselves with or without the use of AK 47. And to put an official stamp to it,  Minister of Defence Major General  Bashir Magasi has also asked the citizens to defend themselves against bandits. Why, he asked, should they be running away from minor, minor agressions?

I wonder too. But the general seemed to have forgotten to tell the unarmed citizens what they should use to defend themselves against the bandits – AK 47 or their cutlasses. Or their fists?  Or just  their raw anger? Or the Biblical stone of David against Goliath?