Home Columnist The ‘Somalisation’ of Nigeria – By Simon Kolawole 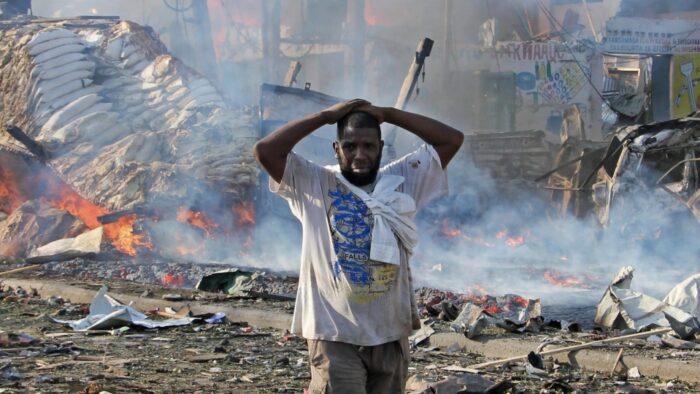 The quit notice served on the Fulani community in Igangan, Oyo state, by a non-state actor, Chief Sunday Igboho, is a timely reminder that Nigeria is at the risk of becoming a failed state.

In my previous article, I argued that no private individual should have such powers in a modern nation-state. But with unending raping, kidnapping and killing — and with the Nigerian state unable or unwilling to bring the criminals to justice and protect its citizens — Igangan people cried out to Igboho, a “youth leader” who works for politicians during elections, for help. They have more faith in Igboho than the Nigerian state. He swiftly asked the Fulani to quit. We are playing with fire.

The basic definition of “state” places emphasis on “one organised territory” under “one government”. In some ways, Nigeria now has many governments. The state is losing its sovereignty in parts of the country, with the vast ungoverned spaces falling under the control of violent non-state actors. Max Webber, the German intellectual, defined “state” as a polity that maintains a “monopoly on the legitimate use of violence”. When an individual or a group of individuals assumes the power to “legitimately” use violence to enforce what it sees as law and order, the state is going down. Its sovereignty is being eroded. If this goes unchecked, the state can only get weaker.

In 2008, Professor Phil Williams, who teaches at the University of Pittsburgh, identified five categories of violent non-state actors. In his article titled “Violent Non-state Actors and National and International Security”, Williams listed them as: (1) warlords (2) militias (3) insurgents (4) terrorist organisations and (5) criminal organisations and gangs. We can be in denial for as long as it pleases us, but several developments in recent years, since at least 2008, are loosening the nation’s integrity — and things promise to be worse in the years ahead. The Nigerian now takes orders not only from government officials but also from private individuals who have unilaterally assumed state powers.

Nigeria is evidently inching towards what international crisis experts would term “Somalisation” — what you and I would call a state of lawlessness “where anything goes”. At a point, Somalia was virtually finished as a sovereign political entity. Although Somalis are almost entirely of one religion, one sect, one ethnic group and have similar physical looks, the country has been decimated and controlled by gangs, terrorists, pirates and militias in the last 30 years. Somalia, classed as the most culturally homogenous country in Africa, had no functioning central government and was controlled by clan warlords for over 20 years. The Al Shabbab terrorist group is an offshoot of the anarchy.

As things stand today, the Nigerian government is losing control of parts of its territory to Boko Haram insurgents, who are operating mainly in the north-east and collecting tributes from Nigerian citizens; bandits, who are collecting taxes and tributes from farmers in the north-west; kidnappers, who control some forests in the south-west and north-west and extort ransoms and sex from their victims; warlords and militants in the Niger Delta, who routinely attack pipelines and steal crude oil; pirates, who operate on the high seas and hijack ships; and a separatist movement in the south-east frequently clashing with the police and military in its campaign for secession.

Why is the Nigerian state losing its territorial authority, such that warlords, militias, insurgents, terrorist organisations and criminal gangs have become so entrenched that they are unleashing lawlessness on some parts? Why are non-state actors, such as Igboho, increasingly taking control of ungoverned spaces and making a hero of themselves in the process? What is encouraging and sustaining the rise of non-state actors all over the country? These are the questions we should be asking ourselves if we are to avoid total state collapse and take back the country from those undermining our sovereignty. Unfortunately, we would rather be emotional than logical.
The pervasive insecurity is a major, major warning signal.

This is the fundamental point: security agencies have been damaged by corruption and incompetence — and that automatically compromises the safety of the nation and its citizens. Convicted criminals are recruited into security agencies, as President Olusegun Obasanjo publicly lamented when he was in power. What then do you expect? Corrupt security officials are allegedly involved in kidnapping and banditry, either directly or as accomplices. We have read reports of some police officers renting guns to criminals. Rogues in security uniform are worse than the criminals they are chasing. Insecurity is inevitable.

Also, there has been a series of perennial complaints of underfunding and poor equipment. Even if the agencies are devoid of criminals and accomplices, how much can they achieve when there is no sufficient modern equipment and funding for them to enforce law and order? How much efficiency do you expect from an agency where officers have to fuel operational vehicles, feed detainees and transport suspects to courts from their own pockets? That is a broken system. Even the bravest and the most honest of them will find it difficult to stay above board. It is frustrating. Yet we expect to be protected from bandits, kidnappers and armed robbers. We plant potato and plan to reap yam.

Senator Femi Ojudu, a presidential aide, recently wrote an unintended exposé on the relationship between politicians and thugs. He knows the names of all the thugs in the south-west who make or mar elections! He mentioned Ade Basket in Akure, Fada Geri in Ondo, and Sunday Igboho in Oyo. I was told about one Kunle Poly who was briefly, and secretly, released from prison to organise his boys for the Osun governorship poll in 2018. Politicians nurture violent non-state actors by financing criminal gangs and undermining the police and the state. That is one of the reasons why our security system is compromised at all levels. And we expect to be safe when we are moulding insecurity.

Elsewhere, Boko Haram took advantage of ungoverned spaces to launch sustained assaults on the Nigerian state. There had been no government presence in many northern territories for decades. Not only are our borders porous, even the manned spaces are nothing but checkpoints for the security agencies to extract bribes and facilitate illegal trade. Nigeria has been largely defenceless for decades. Meanwhile, many of those who ended up in Boko Haram were political thugs called “ECOMOG Boys” who became jobless after elections. We have been reaping the reward of poor governance and crippling poverty, now mixed with religious extremism and ethnic nationalism.

The Nigerian situation is very disturbing. As I noted previously, insecurity by itself is bad enough. When we now layer it with ethnic tensions, it is doubly dangerous. One major complication is the rising wave of ethnic nationalism, which has led to the jumbling-up of issues. The truth, all said and done, is that no Nigerian is safe, no matter the tongue, religion and region. Armed robbers, bandits, kidnappers, bandits, insurgents and terrorists are somalising Nigeria and making life difficult for millions of Nigerians. Our collective agenda should be how to address the issues around safety and security. Sadly, the ethnic nationalists have seen a wonderful opportunity to politick.

I am not saying Buhari should not be criticised for not moving decisively against the criminal herders. That is far from my point. The president tends to have this attitude of “God knows I didn’t ask the herdsmen to kidnap or kill anybody”; while that may be true, it won’t solve the problem. In the last one week, he has made a number of positive moves, apparently in response to public criticism. He needs to do more. I want to believe tension has been de-escalated for now, although the war mongers are still all over the media doing their thing. The urgent task for Nigerian leaders at all levels is to collectively tackle the insecurity in the country so that Somalia will not happen to us.
Finally, as citizens, I think we have — probably unknowingly — given authority to criminal gangs by endorsing the activities of these violent non-state actors. We are enjoying it now because it suits our ethnic and religious sentiments. But they are going to turn on us one day because our interests will not always align. Many Niger Delta militants were also bred by politicians for elections but they became Frankenstein’s monsters. More so, if Igboho can ask the entire Fulani to leave Igangan because of some criminal herders, what stops someone else from ordering all Yoruba to leave Jos because some taxis, usually driven by Yoruba people, are used for kidnapping? Point to ponder.

AND FOUR OTHER THINGS…
NEW THINGS
There was jubilation across Nigeria on Tuesday when President Muhammadu Buhari finally replaced the service chiefs. The agitations for their removal have been on for a while, with Buhari asked to “inject fresh blood” into the war on terror and insecurity across the land.

I have nothing against changing the service chiefs — in fact, I was in the “fresh blood” camp — but I hate to burst the bubble: we have been changing service chiefs since like forever but we are not getting more secure. It tells us there is something deeper we are yet to address. But in Nigeria, we like new presidents, new governors, new ministers and new service chiefs. It always excites us. Watching.

RESOURCE KUNG-FU
The spectacular physical combat between representatives of oil and gas host communities at the National Assembly on Thursday told me something: the proposed break-up of Nigeria may look very pretty on paper, but in reality, it does not promise to lead to paradise — contrary to what we often read on Twitter. They were there to discuss common interests on the petroleum industry bill (PIB). If they could not agree to disagree at that elementary level, you have to wonder how they would handle more challenging matters around nationhood when they become a country. I suspect they would start bombing each other as it happens in many underdeveloped oil regions. Worrisome.

CORRUPTION PERCEPTION
Nigeria has scored its lowest marks in the Transparency International corruption perception index (CPI) since 2015, scoring 25/100. That was a horrible performance. I was not surprised that the PDP gleefully seized the opportunity to hit hard at Buhari and the APC government — that was exactly what APC and Lai Mohammed used to do to PDP-led administrations some years ago. But we need to be clear about something: CPI is measured using “perceived levels of public sector corruption”. In other words, as I have always argued, it is not only corruption at the federal level that is being measured; states and councils are also part of the picture. It is the public sector. Understood?

CROSS CITIZEN
After being rejected twice because she is not “originally” from Cross River, Justice Akon Ikpeme was finally confirmed as the state chief judge on Thursday. I was so happy. I don’t even know her and she doesn’t know me, but I was glad because this is another major statement in promoting citizenship rights in Nigeria, well above “state of origin”. She was born and bred in Cross River, schooled in Cross River, practised her law in Cross River, is married to a man from Cross River and all her children are Cross Riverians — but her own parents were from Akwa Ibom. I understand the politics of scarcity, ladies and gentlemen, but some things should align with common sense. Progress.