Home Columnist Pius Anyim; the many challenges of ‘a gold fish’ – By Obinna... 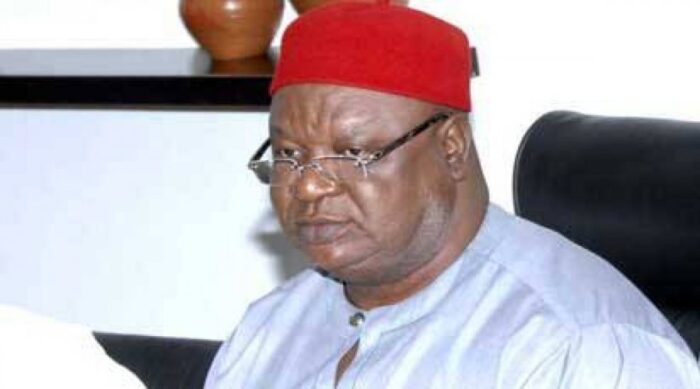 Nigeria’s former senate president, Anyim Pius Anyim rarely comes across as a politician. Indeed he is not the usual player of the political game. A very dedicated member of the Assemblies of God Church, whose life practically revolves around work and worship, he is an oddity in a field dominated by showy men and women.

But since he burst into the scene of the country’s political theatre, the publicity shy, taciturn statesman, has continued to prove an actor of immense dexterity. His giant strides are particularly enthralling given his very humble background.

His life, his close associates say, bear eloquent testimony to the assertion that God lifts those who humble themselves before him. And the fact that ultimately, hard work and dedication pay huge dividends.

“Having noted the fact that there is the God factor in everything that every human being will achieve, I attribute Anyim’s accomplishments to, first of all, the God factor. Again he has been able to do the things that he needs to do as a human being very well. I worked with him and we have remained very close even after we left office in 2015.

“He is a very serious minded person who takes everything he is doing very seriously. He is always totally committed to whatever assignment he is given, to the point that almost forgets about everything else. When he sets a goal, channels every effort towards achieving that. Importantly, he is very honest and has fear of God.

“He has respect for people including those work for him, starting from cleaners who clean his office. He respects everyone. For those of us that worked under him, he treated us as colleagues and valued everyone’s opinion and had respect to your person and considered you a human being. He never minded that he was the boss.”

Anyim began life in public service shortly after youth service when he became Head of Protection Department at the National Commission for Refugees, Abuja, a job that included provision of legal services and political protection for refugees. He has not looked back.

Often unassuming and calm, he possesses such intricate disarming persona. But behind this facade of innocence or even timidity, is a true warrior who has fought and won many tough battles, and who never shied away from confronting any adversary who came knocking on his doors.

His recent spats with the likes of braggadocious Anambra billionaire, Engr. Arthur Eze and the overly bossy governor of his home state of Ebonyi, Engr. David Umahi, provide glimpses of his ability to stand up to any adversary. Before them was Senator Sam Egwu, a former governor of the state.

“People usually don’t see him coming because he is not loud. Before he takes a step, he would have thought it through. He is a deep thinker,” says Nwaobasi.

“Because he is not a loud person, people may think that they can ride rough shod over him, not knowing that he has done his work well and he’s at peace with his God. He doesn’t go looking for trouble but when trouble comes to look for him as a human being he does not run away.”

But the former secretary to the government of the federation, is noted more for his towering accomplishments in the political scene, and perhaps even more for his humility and kindheartedness.

“Anyim is an achiever who always gets anything he wants done. I might even say he is a lucky person,” says Bob Okey Okoroji, Lagos based lawyer and one time governorship aspirant in the state.

“Jerry Gana brought him into politics as a youth corper, because he served under Gana, that was how he got him involved in politics and he has thrived ever since. He became senate president at the age of 39, that’s impressive.”

Indeed, when in 1999, Anyim got elected into the Nigerian Senate, aged just 38 – the second time he would be winning senate election in his constituency – he was possibly the youngest member of the upper legislative chamber, quite obvious the youngest from the Southeast. It would not have been out of place to assume that the young, calm senator was there to make up the numbers. For at his age, it would have been easy to imagine that being a senator was already an over achievement. But a year later in 2000, he clinched the coveted office of Senate President, replacing the late flamboyant Dr. Chuba Okadigbo who was impeached the same year, and thus becoming the number three highest office holder in the country at just 39.

The battle that consumed Okadigbo was no less intense than the one that ensued over his replacement. It was a contest that featured ranking lawmakers from Abia, Enugu, Ebonyi among other states, some with close connection to the Olusegun Obasanjo led executive in Aso Rock which wielded colossal influence in every aspect of political life. But the young Anyim outwitted all, becoming the youngest senate president in Nigeria’s history.

As senate president, even at a young age, Anyim demonstrated rare leadership qualities. He displayed maturity and brought much needed stability to the hitherto volatile red chamber. In an era where laying banana peels for senate presidents was the norm, Anyim held his own and brought sanity into the the business of lawmaking. And of course, served till the end of his term in 2003, becoming the first senate president to do so in the fourth republic.

“Anyim is a unique personality. He has accomplished many things in his political career,” notes Chief Abia Onyike, chairman, publicity bureau of Alaigbo Development Foundation (ADF).

“Within few months as a senator, he became the senate president and used the office to set the tone for what the leadership of the senate should be for others coming after him. The respect accorded that office today is as a result of the foundation laid by him.

“He is a pan Nigerian leader who has emerged as leader of the Nigerian legislative caucus. This position is not a formal one, but he merited it on account of the competent leadership that he offered Nigerians as senate president. He gave a very good account of himself and that is why, if you watch very carefully, sometimes when the national assembly members, both serving and retired, want to take position on national issues they consult him.”

Anyim largely retired to a quiet life after his tenure in the Senate, having opted not to seek reelection in the 2003 general election.

A fighter for justice, he would next announce his presence on the national stage when in January 2010, he led a delegation of 41 eminent Nigerians to call on the apparently indisposed President Umaru Yar’Adua, now late, to transmit a letter to the National Assembly to salvage the nation’s democracy from danger.

The senate would subsequently on February 9, pass a to make Goodluck Jonathan, then vice president, acting president. In May 2011, following the victory of Jonathan in the presidential election that year, he was appointed Secretary to the Government of the Federation. And in that capacity, he once again proved his mettle.

“As SGF, he also did very well taking the entire federation into consideration. He used that office to serve Nigerians from all walks of life and carried everyone along,” Onyike says. “He is pan Nigerian. Anyim is not a man who believes in force, he believes in leadership by example.”

Indeed, many who have come across him say his humility is magnetic, and his ability to carry others along has been his winning formula.

“He is a very loyal and faithful friend to his associates,” notes Mr. Vin Mgbemena, former Managing Director of Orange Drugs Limited. “He’s somebody who doesn’t give up on anything he believes in.

“Once he sets a goal he will do everything within his power to actualize that goal. Again he doesn’t enter any project without first committing it to God. Whatever he wants; whatever decision he wants to take in life, he always consults God, and that has always guided him in everything he has done in life.

“Prayer is his ultimate strength. He submits totally to the will of God. Remember the way he handled the senate when he was senate president; the way he handled some of the untouchables in his seniors then, that will tell you the kind of person he is. He is not somebody you can take for granted.”