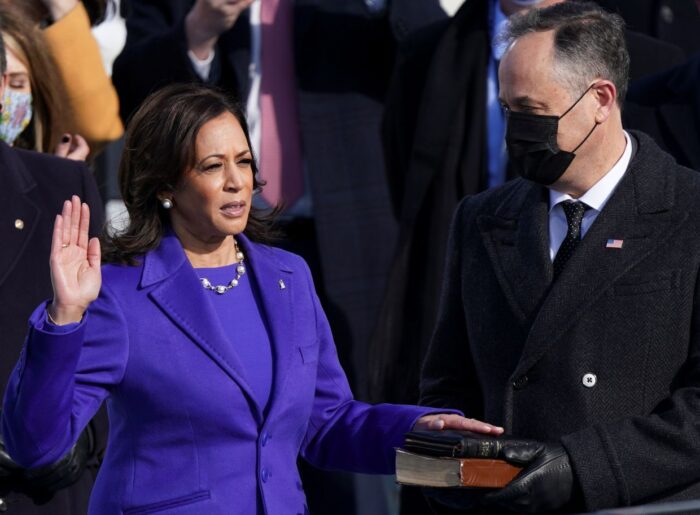 And with a final “so help me God,” Kamala Harris was sworn in Wednesday as the new vice president — the first woman, first Black person and first person of Asian descent to hold the office.

Harris, 56, took her oath of office from Supreme Court Justice Sonia Sotomayor, a history-maker as well as the highest court’s first Latina.

The new vice president, watched by her family and new Second Gentleman Doug Emhoff, was sworn in on a bible owned by late Supreme Court Justice Thurgood Marshall, whom Harris has called one of her “heroes.” Harris also used a bible owned by Regina Shelton, a family friend.

“I was absolutely, and remain, so excited about our partnership,” she told PEOPLE last year of working with incoming President Joe Biden, “and all the potential of our country that has yet to be achieved.”

Biden was sworn in shortly after her.

In an interview with Good Morning America last month, Harris said she will certainly be “thinking about my mother” on Inauguration Day.

Her mom, Dr. Shyamala Gopalan, died of cancer in 2009. “I’ll be thinking about all those girls and boys,” Harris said then. “You know, before the pandemic struck, fathers and the mothers that would bring them around and say, ‘You know, you can do anything.’ ”

“I was raised by a mother who said to me all the time, ‘Kamala, you may be the first to do many things — make sure you’re not the last.’ That’s how I feel about this moment,” the former California senator added.