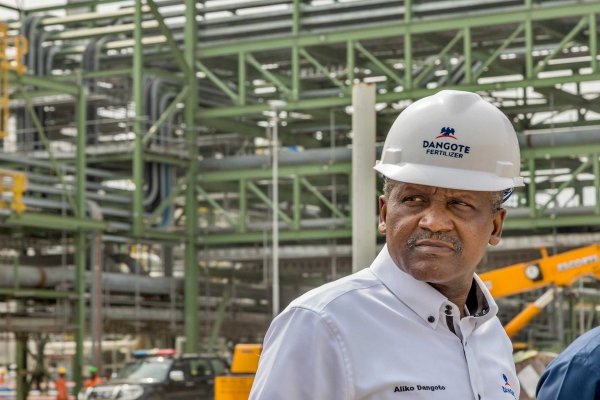 The business case for the construction of Dangote’s oil refinery is based on an unofficial government policy that prevents the country’s four state owned oil refineries from operating optimally. In the space of 25 years, $25b has been spent on turnaround maintenance of the refineries yet today Nigeria still imports to meet all of its domestic demand for refined petroleum products.  The cost to the country is high: Between 2018 and 2019, just under $60b was spent on imports.

Dangote’s refinery, with its 650,000 barrels a day crude oil processing capacity, is projected to meet all of Nigeria’s domestic needs when completed. As of 2016, this amounted to 428,000 barrels a day. Any surplus will be allocated for export. It means that the billions of dollars the country currently spends on imports every year will cease and be “re-directed” to other priority sectors of the economy. This is an outcome that appears laudable when viewed solely within a Nigerian context.

Business men solve problems and that is what Dangote has set out to do. But Nigeria is a peculiar country, where problems tend to be artificial, only existing because it is in the government’s financial interest that they do. By allowing Dangote to build his refinery (instead of taking the logical step to fix the existing refineries), the government appears to be ceding control of their monopoly over the domestic market, which is currently serviced by the NNPC through imports. What then will be the incentive for rehabilitating the state owned refineries? In a post #EndSARS world, can the government continue to use the charade of “ongoing turnaround maintenance” to justify huge expense claims? What is clear is that the market value of the four state owned refineries will be markedly reduced by the entrance into the market of the Dangote refinery.

Looking at the Dangote refinery project within a global context requires the understanding that Nigeria is just one part of a global village, competing with other nations in the market for goods and services. If it can be proven that the refinery improves Nigeria’s competitive position on the world stage, then this will certainly translate into a positive outcome for the wider economy.

The dominance of technology companies in global investor portfolios confirm that the world has progressed well beyond the start of the 4th Industrial revolution.  We are now living in the digital age where information, innovation and technology are driving changes in the way in which we live our lives and interact with one another.  What role will oil play in a future world that is committed to reducing global warming by increasing renewable energy and where 190 out of 197 nations have already ratified the 2016 Paris Agreement on climate change. According to research by the Intergovernmental Panel on Climate Change (IPCC), emissions from fossil fuels are the dominant cause of global warming. With 80% of Nigeria’s current power generation coming from gas and most of the rest from oil, the Dangote refinery will ensure that the country continues to march in the opposite direction to global trends. In 2019, global investments in clean energy reached $282.2b, more than fossil fuels and nuclear technologies.

In the renewable energy space, Nigeria has enormous solar energy resources. Blessed with average year round sunshine of 6 hours per day, recent studies have put the country’s concentrated solar power generation potential at 427,000 MW. Current solar power generation levels stand at 5,000 MW. The potential in the Hydro electricity space is also big. Nigeria’s 2015 National Renewable Energy and Energy Efficiency Policy set out the government’s priority to “fully harness the hydropower potential in the country, promoting private sector and indigenous participation in hydropower development”. The total exploitable potential of hydropower is estimated at over 14,120 MW out of which roughly 85% is yet to be developed.

It is not just global investments that are moving away from fossil fuels, leading oil exporters themselves are doing the same, partly prompted by the time element attached to their major economic resource. In 2016, Saudi Arabia with an estimated 70 years of oil supply launched its Vision 2030 diversification plan. When the world’s biggest oil exporter, with the 2nd largest oil reserves in the world decides to start the process of diversifying its economy, a fellow oil producing country like Nigeria needs to sit up and take notice. Nigeria is estimated to have 45 years of oil supply left. Diversification of the economy has been on its agenda for years with little success.  In 2019, the Central bank provided the Dangote Refinery with a funding facility of N75b, thereby publicly supporting a private company operating in the very industry that the country was trying to diversify away from. What was the CBN’s investment justification for this intervention? Global investors say technology is the future and this is clearly backed up by evidence coming out of leading stock markets around the world.  Can Nigeria compete globally in the technology sector? What is the impact of N75b (approximately $154m) on an oil refinery project that has an estimated construction cost of $15b? Would the N75b have made a greater impact if deployed in Nigeria’s burgeoning technology sector?

The numbers coming out of Nigeria’s technology sector are impressive and probably make a better case for Central bank intervention. Between 2014 and 2019 Nigerian fintechs raised more than $600m in funding. In 2019 alone, 25% of the $491.6m in investments in Africa went to Nigerian fintechs. In the same year, Interswitch, one of Nigeria’s earliest fintechs, confirmed its $1b valuation after Visa took a minority stake in the company. Fast forward to 2020 and the height of the #EndSARS protests; Paystack, a Nigerian fintech was sold to Stripe, a global fintech giant for a reported $200m in one of the biggest deals in Nigerian corporate history.

According to the National Bureau of Statistics, as of the 2nd quarter of 2020, Nigeria’s ICT sector accounted for 17.83% of the country’s GDP, nearly double that of oil and gas which stands at 8.93%. If the technology sector already makes a bigger contribution to GDP than Oil and Gas, then what is the problem? The problem is that 90% of Nigeria’s foreign exchange earnings ($58b in 2018) come from Oil and Gas. Nigeria is essentially a mono-product economy and there are inherent risks that come with this. Oil market price volatility is obviously one such risk. It is difficult to plan an economy like Nigeria’s for the long term when you have no control over the main driver of the economy, oil prices. The answer to this is diversification of Nigeria’s foreign earnings so that it is less dependent on an oil industry that involves less than 1% of the country’s population and is dominated by expatriates, members of the political class and their friends.

When Dangote’s refinery comes on stream it will replace one monopoly with another monopoly. Competition is good for consumers as it generally lowers prices. Monopolies in contrast can fix prices which may not always be to the advantage of the consumers. Will Dangote, a private businessman have too much power? In Nigeria’s personality driven business environment how much of Dangote Industries intrinsic value lies personally in Aliko Dangote himself as opposed to the Dangote brand? Structural deficiencies exist in Nigeria’s economy that mean the price of petrol and diesel have as great an impact (or more) on inflation as do the monetary policies coming out of the Central bank. Dangote’s power could well extend beyond just being the country’s sole supplier of refined petroleum products.

In a country with a combined unemployed and underemployed rate of 55.7% the biggest challenge for government will be to create jobs. The management of Dangote Refinery and Petrochemicals say the new refinery will generate 250,000 jobs when complete. How realistic is that? More importantly, are these the type of jobs Nigeria should be creating in the 4th Industrial revolution? An oil industry that is non inclusive will have an insignificant multiplier effect on the rest of the economy (in terms of job creation) even after the refinery comes on stream.  Yes its 650,000 barrels per day crude oil processing capacity will make it the largest single-train refinery in the world. Yes, Aliko Dangote may or may not be “Africa’s richest man”. These are mere news headlines that in reality reinforce an underlying perception of a country out of step with global trends. We have the opportunity to showcase globally the talents of our young Nigerian fintech stars but instead choose the story of the world’s biggest single train oil refinery as our 2020 headline to the world.