Home Columnist Rawlings and the verdict of history – By Obadiah Mailafia 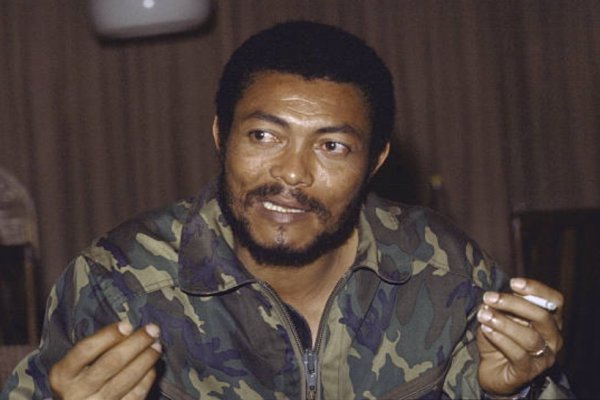 Ghana’s longest serving leader, Jerry Rawlings, passed away on Thursday November 12, aged 73. He had been a fixture in Ghana’s politics for four decades. Jerry John Rawlings was born on June 22, 1947 in Accra, the son of a Scottish chemist, James Ramsey John, and an Ewe mother, Victoria Agbotui. She died just weeks before him, on September 24, at the grand old age of 101. The image of him weeping at her funeral was touching.

His White father never identified with him as a son. This must have cast a shadow over his life. He once told an Italian journalist: “Christianise me, if you may, but please don’t Europeanise me”. He attended the famous Achimota College, where he was known more for pulling stunts than for intellectual effort. A former British schoolmaster described him as one of his “headaches”at Achimota.

Young Rawlings was suitably impressed when he met President Kwame Nkrumah as a schoolboy. Nkrumah’s fall from power in February 1966 was a shock to many progressive youths like him. He left Achimota in 1967 and was soon enrolled at the Military Academy at Teshie.He graduated in 1969, winning the Speed Bird Trophyfor the best graduating flying officer.

In January 1977, he married his childhood sweetheart, Nana Konadu Agyeman. A union of destiny. She was his soulmate, companion, sounding-board, and, some would say, Lady Macbeth. They are blessed with four children, one of them being Zenator Agyeman-Rawlings, the MP representing Klottey-Korle.

Rawlings began his air force career at a time when the military were alreadydeeply embedded in national politics. General Joseph Ankrah ruled from 1966 to 1969. He was forced to resign over a bribery scandal involving, wait for it, a Nigerian businessman and arms dealer by the name of Chief Arthur Nzeribe. Ankrah was succeeded by General Akwasi Afrifa, who served for barely a year before handing over to a transitional civilian administration that ushered in Prime Minister Kofi Abrefa Busia in October 1969.

A highly eruditescholar and aristocrat, Busia turned out to be a big disappointment. The economy was in ruins. The countrywas adrift. His decision to commence dialogue with Apartheid South Africa showed poor judgement. The expulsion of 140,000 Nigerians in November 1969 did much damage to the country’s image. In January 1972, the government was overthrown in a coup led by Colonel Ignatius Kutu Acheampong. But he himself was no better. In July 1976, Acheampongwas overthrown by General Fred Akuffo, who ruled until June 1979.

In April 1978, Rawlings was promoted to the rank of Flight Lieutenant. This gave him an entrée into the gilded world of the elites. What he saw was unsettling. He began reading widely while hobnobbing with intellectuals at the university campus at Legon. He joined the New Africa Movement, a leftist collective committed to Pan-African liberation. For the first time, he visited the rural countryside and was shocked by the spectre of grinding poverty.

On May 15, 1979, barely five weeks to the handing-over to a civilian administration, Rawlings and his colleagues staged a coup. It however failed. The conspirators were rounded up and court-martialled. Whilst awaiting execution, mutinying soldiers invaded the prison and set the captives free. Akuffo was toppled. One of the casualties was Sandhurst-trained Army Chief General Odartey Wellington, a gallant officer who was gunned down for attempting to quell the rebellion.

On June 4, 1979, Rawlings took over as Head of State and Chairman of the Armed Forces Revolutionary Council, AFRC. He was only 32. He promised that his administration was merely a revolutionary house-cleaning exercise. He embarked upon gruesome purges that would have impressed Soviet strongman Joseph Stalin. Top echelons of the military were executed, three of them former Heads of State: Ignatius Acheampong, Fred Akuffo and Akwasi Afrifa. More than 300 others were also executed.

In September 1979, the junta handed over peaceably to a democratically elected government headed by Hilla Limann, a mild-mannered career diplomat. Limann turned out to be an ineffectual wimp. Rawlings and his group struck again in December 1981. Limann was shoved aside. The purges resumed. In June 1982, three Supreme Court justices– Cecilia Koranteng-Addow, Frederick Sarkodie and Kwadjo Agyei Agyepong – were abducted from their homes and brutally murdered. Hundreds of lesser-known soldiers and civilians perished. The press was muzzled. Trade unionists and intellectuals who criticised the regime were incarcerated.

On the external front, Rawlings cosied up to Cuba, Nicaragua, Libya and other radical regimes that were considered anathema by Western powers. He also developed closer ties with Nigeria and was a strong partner in the ECOMOG peacekeeping machinery that ended civil wars in Liberia and Sierra Leone.

Believing that the economic challenges facing Ghana were down to “greedy capitalists” and “kalabule” women, draconian repressions were slammed on the economy and society. Price controls were imposed on most goods. Workers’ Defence Committees, WDCs, were created to browbeat all those who would not fall into line.

The results were disastrous. The economy collapsed. The treasury became empty; inflation, debt and other financial fundamentals worsened. Life became a Hobbesian nightmare for the masses. Millions voted with their feet. In 1983, Nigeria was facing a major oil crunch which necessitated drastic economic austerity measures by the Shagari administration. In an election year, Shagari took the disgraceful decision to expel over two million Ghanaians. It was the ultimate humiliation for Ghana. Rawlings struggled hard to resettle the returnees and to restore hope to a broken people. The wounds between our two nations have never totally healed.

He was eventually persuaded to embark upon a programme of structural reforms under the tutelage of the Bretton Woods Institutions. The ensuing Economic Recovery Programme, ERP, led to deregulation of the economy and devaluation of the cedi. Inevitably, there were gainers and losers. Strikes and insurrections were rife. Several coup plots were foiled. For more than a decade, Rawlings kept a distance from his own children. He said he did not want them to suffer too much trauma if he perished in this game of Russian Roulette.

The reforms seemed to work. The government proved adept at steering the ship of state through the stormy waters of economic reform. Dollars flowed in from abroad. Western donors were determined to make Ghana the new “poster-boy” for neoliberal reforms in West Africa.

Political scientist Donald Rothchild described Rawlings as a “pragmatist with populist rhetoric”. Thecombination of authoritarianism and charisma proved effective. Bringing in technocrats such as Jonathan Frimpong-Ansah, Kwesi Botchwey and Tsatsu Chikata obviously boosted the credibility of the government. Although there were grumblings about Ewe domination of the government, Jerry Rawlings was not at heart an ethnic chauvinist. On the contrary, he gave Ghanaians a new sense of identity as one people with one destiny.

Following the ending of the Cold War, he was persuaded to implementpolitical reforms. A new constitution was drafted while a programme was drawn up for transition to multi-party democracy.Reinventing himself as a latter-day democrat, Rawlings and his National Democratic Congress, NDC, contested and won the elections of December 1992. He won a second term in 1996.

It is to his credit that he never succumbed to the temptation to stay beyond the constitutional limits of two terms. The NDC and his anointed successor John Atta Mills lost in the subsequent elections to John Kufuor and theNew Patriotic Party, NPP, in 2001.

In life as in death, he remains a polarising figure among Ghanaians. He has his fanatical devotees. But there are also manywho loathe him. Love him or hate him, there is no disputing that he was the architect of the New Ghana. If the country today is considered a stable, forward-looking democracy, it is thanks to the foundations laid by him. Ghanaians will be going to the polls thisDecember. His looming shadow will not go away.

He was not by any chance a paragon of Gladstonian virtue. Those who knew him said he could be vindictive. Was so much blood necessary for the revolution? I have my doubts. I have met Ghanaians who are yet to recover from the trauma of those years. Perhaps that was the price that had to be paid. Rawlings pulled Ghana from the brink through the baptism of fire – through blood, sweat and tears. Despite his sins, I believe history will absolve him.