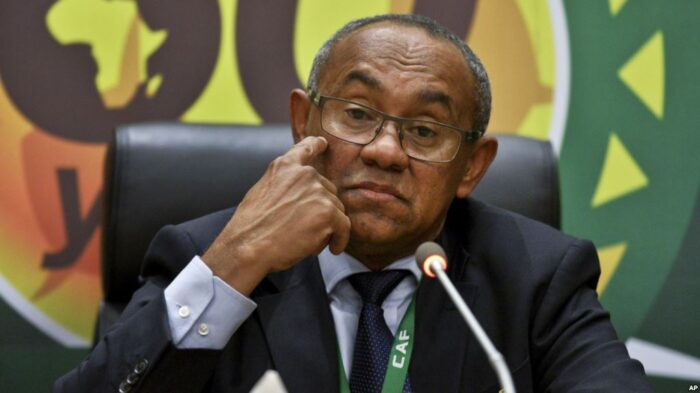 Confederation of African Football (Caf) president Ahmad has been banned for five years by Fifa for breaching various codes of ethics.

The 60-year-old, a vice-president of world governing body Fifa, has been found to have breached codes relating to duty of loyalty, offering and accepting gifts, abuse of position and misappropriation of funds.

“The investigation into Mr Ahmad’s conduct … from 2017 to 2019 concerned various Caf-related governance issues, including the organisation and financing of an Umrah pilgrimage to Mecca, his involvement in Caf’s dealing with the sports equipment company Tactical Steel and other activities,” a Fifa statement read.

Mr Ahmad, whose impending ban was announced BBC Sport Africa last month, has also been fined $200,000. He has previously denied any wrongdoing.

In a rare move, Fifa has split its investigation into two parts with Ahmad having asked for his ethics case to be resolved prior to the 12 November deadline for presidential candidates to be named.

After his bout of coronavirus, which he tested positive for on 30 October, delayed his hearing, this deadline was unable to be met.

He can appeal his sanction at the Court of Arbitration for Sport (Cas) once he has received the full grounds for the decision, a process that can take up to 60 days.

Last month, the former head of Madagascar’s FA announced his intention to go for a second term in office.

This is now in major doubt as Mr Ahmad, who was elected Caf president in 2017, would have to pass an eligibility test to resume his place on the Fifa Council.

Any chances of re-election will be dependent on not only winning his appeal at CAS but also ensuring said appeal is heard early enough to allow him to be confirmed as a candidate.

Should Fifa take 60 days to issue its grounds, Ahmad would be ineligible to stand for re-election since he would need to be cleared of any wrongdoing by 11 January, the date Caf is scheduled to formally announce the presidential candidates to its members.

Mr Ahmad recently stepped back from leading Caf, stating that he had done so for ‘medical reasons’ as he continues to recover from coronavirus, so leaving Caf’s first vice-president Constant Omari in charge.

“In accordance with its statutes, Caf announces that the current interim of Mr Constant Omari as President of Caf is extended,” African football’s ruling body said in a statement.

“Caf, which is concerned about the reputational consequences of this long procedure, maintains the schedule of all its activities and programs.”

In its statement, Fifa cited both the Ahmad’s ‘involvement in Caf’s dealings with the sports equipment company Tactical Steel’ and the ‘Umrah pilgrimage to Mecca’ among the reasons for his sanction.

In June 2019, a joint investigation by BBC Sport Africa and Josimar magazine revealed Caf’s unusual association with Tactical Steel, a France-based company which traditionally makes gym equipment but which became a key supplier for Caf in 2017.

Tactical Steel is owned by Frenchman Romuald Seiller, an old friend of Ahmad’s former attaché Loic Gerand. There is no suggestion that either man, who the BBC has previously contacted for comment without success, personally profited from the arrangement.

Since late 2017, just months after Ahmad’s election as president, Tactical Steel won a handful of contracts with Caf – with its first, which centred on providing equipment for the 2018 African Nations Championship, attracting particular attention.

The December 2017 deal was notable as Caf cancelled an order worth just under $250,000 with sportswear company Puma – which had come with a 60% discount – to take up a slightly larger order with Tactical Steel that cost four times as much ($1,015,313).

In early June 2019, French anti-corruption authorities questioned Ahmad about Tactical Steel while the Malagasy was in the French capital Paris for a Fifa Congress.

The Umrah pilgrimage to Mecca, meanwhile, featured at least two dozen Muslim-only presidents of African football associations travelling to Saudi Arabia in May 2018.

Caf paid nearly $100,000 for a trip which Fifa did not consider to be a football activity given its religious nature.

Fifa opened an investigation into Mr Ahmad after his former secretary general, Amr Fahmy, made allegations about corruption inside Caf in March 2019.