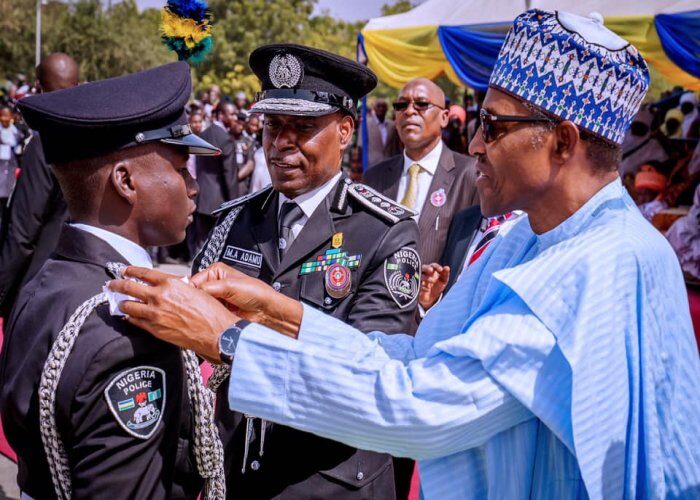 I am all for a reform of the police force. I am also aware that there is enough literature based on numerous committee reports to guide us on the best way to go about it. If the purpose of the reform is truly to give the people the police that they deserve, it means we, the people need to be reformed too, going by the axiom that the people get the government they deserve.

For the police, in particular, the protests, tagged #EndSARS, which engulfed the country in the last one month and which have become a subject of judicial inquiry have brought the issue of reforms forcefully into the national conscience and made reforms especially in the police and other security agencies mandatory.

Police image from the 80s to date gives the impression that the force has always been a source of terror instead of being the friends and the protectors of the society.

If you recall the brutality of the police during students riot in Ahmadu Bello University Zaria in March 1984 in which some students were killed when police used live bullets to stop the protest of unarmed students or the bestiality of the force against the Bakolori farmers much earlier, you would be under the impression that the police had always been like that.

Despite all the public relations activities over the years to portray the police as a friend and not the scourge of the public, the advent of SARS, which paraded some rogue members unfortunately compounded their ugly picture. I am personally convinced that the picture has not always been bad. In the good old days, the presence of the police patrolling the communities was enough assurance that all was well; enough confidence that your lives and property were indeed safe, to a large extent. On the highways, road users were reasonably assured of their safety against armed robbers, despite the fact the numerous police checkpoints constituted some nuisance. But give and take, the little toll – call it bribe if you may  –  that one gave them as a tip, in answer to oga wetin you carry, was nothing compared to the nefarious activities of armed robbers on the highways.

But when SARS became lords of the highways, their presence instead of being a source of confidence to motorists, became their scourge. Because of their weird looks and nondescript casual dressing mode, they became indistinguishable from robbers and kidnappers.

For their replacement, SWAT, not to be seen and recognized merely as old wine in a new bottle, the police reform must be all-embracing.  And it must take into consideration the sociological and even the cultural makeup of the personnel and the environment in which they operate. The rule of engagement would have to be overhauled to make it conform with the rule of law and the imperatives of democracy.

At this point, it is perhaps worth the while to interrogate certain noticeable paradoxes that had been thrown up by police in the 70s after the Civil War through the military rule up to the return of democracy in 1979. Why one may ask, is there a seeming propensity for police brutality during the so-called democratic era than there is during the military rule? Let me attempt to illustrate this seeming paradox with an example from two eras that I am familiar with. After the war in 1970, the police in the remaining period of the military rule under General Yakubu Gowon from 1970 to 1975 appeared more civil and protective of the civilian populace than they were under the democratic civil rule of President Shehu Shagari for instance.

This observation is not to discountenance some aberrations like the killing of Kunle Adepeju, an undergraduate of the University of Ibadan in February 1971 when students of the university disagreed with authorities over their meal and staged a protest during which police was invited to mediate. The killing of Adepeju was marked every year and it gave activists and radicals in and out of campus the forum to make fiery socialist speeches in which they called for an end to military dictatorship.

From the lesson they learned from that incident, it would appear, the police authorities now had a new and more civilized rule of engagement. Since then they hardly used live bullets to quell student riots. In the 1972/73 session when the Gowon government introduced the National Youth Service Corps, NYSC scheme, students violently resisted it on the campuses without any loss of life. Even when students prevented General Gowon from using Herbert Macaulay Way in Yaba, Lagos on his way to the airport on a trip to Sudan, the police did not disperse them with live bullets. General Gowon was forced to use a helicopter to the airport.

In my time, the highpoint of student power was in 1974 when the police arrested students that went to Ibadan to mark Adepeju Memorial Day. The news of the arrest filtered to the University of Lagos campus in Akoka. Before daybreak, students had captured and detained five policemen in retaliation for the arrest of their comrades in Ibadan. For five days they kept them on the campus, routinely taking them to the cafeteria to eat with the press covering this strange student hospitality. After all entreats by the police had failed, they stormed the campus in an amphibious operation reminiscent of the liberation of Bony from Biafra by Federal troops during the civil war. Police stormed the campus by land, sea, and air with their helicopters landing on the sports ground. They gallantly liberated their men from the grip of students without firing a shot. But they went away with prisoners of war!

Contrast this period with the brutality of the police under Inspector General Sunday Adewusi of the Shagari era during which the police image dipped badly earning the unflattering sobriquet of “kill and Go”. They became tools in the hands of the politicians. In a democracy, policemen, especially the unscrupulous ones among them, allowed themselves to be used in total violation of decency and decorum. They had no regard for the noble institution they represented and they had no qualms seeing their roles as the defender of the powerful against the irritations of the powerless. Which reminds one of the stories of a tenant whose landlord was hell-bent on ejecting him from his house against the spirit and the letter of the agreement. The tenant took his case to the rent tribunal. But having heard the landlord’s side of the matter, the tribunal chairman turned to the helpless tenant for his case. But before he could even utter a word, he was stopped midstream. What could he say? Didn’t he hear that the landlord wanted him out of his house? That was the role the police assigned to itself.

Fast forward to the military regime that supplanted the Shagari government. To curb the crime rate and do battle with armed robbers, the Muhammadu Buhari military regime called in a top-ranking cop, Fulani Kwajafa, and gave him the marching order to set up a squad that was appropriate for the task at hand. Now retired, Kwajafa said recently that he was the one that set up SARS.  But he confessed that he was disappointed to hear what SARS had turned into. The rogue elements among them had become hirelings in the hands of politicians whose bidding they preferred to do than to obey the call of their fatherland.
In reforming the police, therefore, the authorities must bear in mind that the reforms that will be worth our while and stand the test of time must be all-embracing, holistic and sustainable.

It should go beyond equipping the personnel with strategic weapons and good pay, though these are essential. Most essential, for sure, is the mental make-up of the persona. The leadership of the police, though subject to civil authorities, must be principled enough to differentiate between what is lawful and what is utterly criminal. Above all, he must have the courage of conviction to stand up to politicians who will make unwholesome demands as a matter of entitlement.

Recruitment into the force must adhere scrupulously to laid down rules and regulations. Deviations to accommodate the wishes of politicians, by all means, will spell doom for the force.