Home Columnist Tell my mother I was unarmed – By Obadiah Mailafia 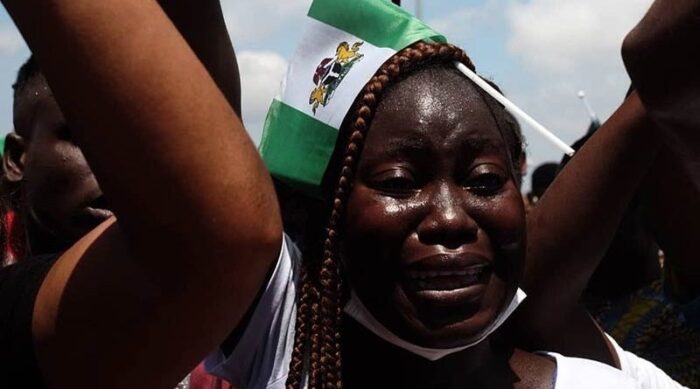 The youth have spoken. Vox populi, vox Dei. Tired of seeing their future being mortgaged by philistines, our youth have decided to take their future into their own hands. We may neither understand nor even empathise with them; but we can never wish them away.

I am a humble economist with abiding interests in political philosophy. One of the most influential texts in political theory that I know of was written by the German jurist, Carl Schmitt, (The Concept of the Political, 1932).  I would not want to bore my gentle readers with its heavy disquisitions, but merely to say that I agree with Schmitt that not everything is political. There are situations that transcend politics. The #EndSARS protests are one of such.  I believe that the drama unfolding before us is nothing short of an existential revolution. And revolutions, by their innate nature and character, do not follow any rhyme or reason. One thing I know for sure is that there is always tinder-box. All that is needed is for the conjuncture of circumstances to coalesce and for one fool or another to light a match that ignites it.

Of course, every revolution attracts the jackals, hyenas, vultures and other scavengers of history. There will always be free-riders and spoilers who will exploit every opportunity to advance their own selfish agendas That explains all the unfortunate looting and mayhem. The ruling classes will always fight back with savagery, as exemplified by the blowback in Abuja, where the mercenary hoodlums came with daggers and submachine guns. It takes courage, patience and wisdom to ignore the noise and to focus on the bigger picture.

What happened at the Lekki Tollgate in Lagos on “Black Tuesday” (October 20) will remain a blight upon our collective psyche. For several days, protesters held vigils in makeshift tents. Without warning, masked men in army uniform were brought in at dusk. The lights and CCTV cameras were shut down. Mobile telephony networks were also blocked. They went into action, killing and maiming defenceless youths. The numbers are still being disputed. While Governor Babajide Sanwo-Olu claimed that there were no casualties, Amnesty International reported that at least 12. It is speculated that the numbers are anything from 20 to 50 people.

What is disturbing is that the lives of young people who were totally unarmed and who were not a physical threat to anyone were snuffed off with such callous impunity.

Rightly or wrongly, Lekki Tollgate has been associated with the strongman of Lagos State, Asiwaju Bola Tinubu. Whilst the mayhem was going on, he allegedly fled to France on his private jet, a claim he denied on Saturday when he showed up at the State House, Marina where he went to pay a solidarity visit to the state governor. He vehemently denies having issued the orders to the military. Earlier, he had also been accused of having allegedly “sponsored” the EndSARS protests. Jagaban Borgu has rightly complained that he could not have committed the two crimes at the same time. Perhaps, we might never know.

As I write, neither Sanwo-Olu nor the military high command has accepted responsibility for having issued the orders. Even if it was the handiwork of a mutinous rabble, heads must roll for this wicked crime.

The Lekki shooting constitutes a crime against humanity. The Chief Prosecutor of the International Criminal Court has let the world know that she has taken judicial notice. The international community and the Commonwealth have also issued strong warnings.

Whether or not he was directly involved, the soi-disant Lion of Bourdillon cannot escape moral culpability. He is the National Leader of the ruling All Progressives Congress. He impresses me as a statesman whose lack of scruples would have impressed Machiavelli and Kautilya. He has never shown compassion for the victims of violence. One of the firms allegedly associated with him mints currency from the Lekki Tollgate.

We hear that his overweening and single-minded ambition is to rule Nigeria. He wants to rule us even when we are not even sure where he was born; which state he originally came from; and whether he did attend Government College, Ibadan and the University of Chicago as he has always claimed. And we do not know anything about his political philosophy, unlike that great leader and sage, Chief Obafemi Awolowo, whose successor he claims to be. A lawyer, economist and philosopher, Awo wrote tomes outlining his glorious ambitions for our country.

For all we know, some of the movers and shakers in our country might not even be bona fide Nigerians. It might turn up to be that those of us who are caught in the middle and have nowhere to go, are being held captive by virtual foreigners. This is why they flee abroad at the slightest hint of trouble. And also, why they are so enamoured of primitive accumulation and so heartless and wicked.

We regret all the looting, arson and violence. But there is no perfect revolution. There are reactionary and even criminal elements among the youths. Those who lead the protests must discipline and force them into line. Sadly, there is also no revolutionary programme. There are no intellectual leaders that can shape this revolution and give it more meaning and purpose. Acting on the basis of anger no matter how righteous, cannot sustain the momentum that is needed. A revolution without discipline and ideas will only lead to anarchy.

Some abject scoundrels have attempted to give religious or ethnic coloration to the protests. But the youth know better. They know that their oppressors only use religion and ethnicity to advance their own selfish ends. In reality, the oppressors are united by their own class interests and do not want a genuinely democratic society anchored on the rule of law, equality, freedom and social justice. The rich send their children to private schools and universities abroad. When they come back, choice appointments are waiting for them in government and the private sector. When they are sick, they are flown to India, Dubai or the West. They mostly intermarry among themselves. They also stash away their wealth in foreign bank vaults while perpetuating intergenerational dynasties at home.

Women activist, Aisha Yesufu, has declared that our youth are fighting for a society where “the son or daughter of nobody can become somebody without knowing anybody”.  It is a fight for the very soul of our country. The worst thing the authorities can do is unleash further military force on defenceless protesters. It would only serve to escalate the crisis. I also counsel our youths not to resort to violence.

The martyred African-American civil rights leader, Martin Luther King Jr, always taught that unearned suffering is redemptive. Those who have lost their lives in this revolution would not have died in vain.  Their blood will lead to the birth of a New Nigeria. What we face are the birth pangs of a new nation. Nigeria will no longer be the laughing stock of the world but a city set on a hill; a country that will be a light among the nations.

I conclude with the haunting lines by an anonymous poet:

“Tell my mother I was unarmed.

Tell my father I had the flag in my hands when I was shot.

Tell the unborn Generation that I died singing the national anthem.

Tell the cowards who shot me that my spirit lives on in the life of every good Nigerian youth.

…Let God judge me, I am only sorry for the pain of leaving you this early.

My prints will forever remain in the sands of history for I have done my time based on the path I chose freely and willingly.

Now that my torment is over… I know that freedom is coming, yes freedom will come tomorrow.”