Home Columnist Buhari did not lie to Trump – By Abimbola Adelakun 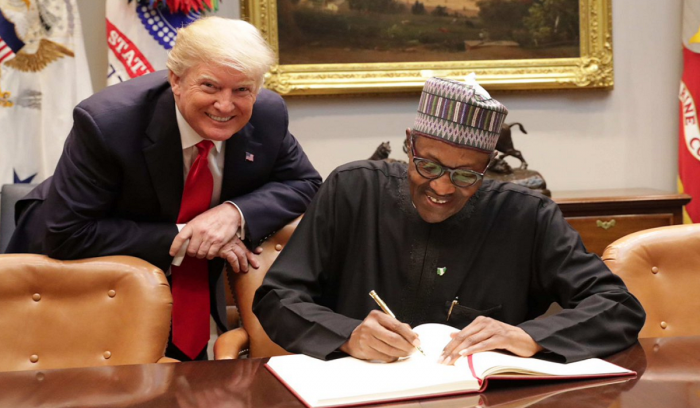 On Tuesday, at a ministerial performance retreat in Abuja, Nigeria’s President, Major General Muhammadu Buhari (retd.), told an interesting story about his USA counterpart, Donald Trump. Given how taciturn he could be, those rare moments when he tells stories about himself are useful insights into his mind. According to Buhari, he was at the White House, (and he took care to note he was the only African among the least-developed countries that got an invite), at the Oval Office, he said Trump looked into his face and asked him, “Why are you killing Christians?” Buhari said emotion surged inside him, but he managed to restrain himself. He said he told Trump the problem had a long history, and that the issue was neither about religion nor ethnicity. Instead, it was a “cultural issue.”

It is tempting to disagree with Buhari, but when you ponder it, he was quite right. Like many western Christians who think every instance of violence in Nigeria is a case of “Muslim killing Christians,” Trump must have been misinformed. The reality is much simpler. There is no “religious violence” in Nigeria. People are not being killed because of their faith. What takes place in Nigeria, and frequently too, are crimes of impunity. People are killing people because we have -and always did — a government that lets them get away with it. On that score, Buhari is right that it is a cultural defect. Except also, he was characteristically untruthful when he started blaming things like “climate change” and “population growth.” Those might be contributing factors, but they are also the excuses by a leader who cannot face the truth. The massacres keep recurring because those who perpetrate them are certain they will get away with them.

Look the case of Boko Haram members and how they have been handed an undeserved amnesty. These are people that have killed thousands of Nigerians, including the servicemen deployed to fight them. They have unsettled millions of lives such that some people do not have the hope of ever returning home anymore. Those people, now unfortunately labelled “Internally Displaced Persons,” face a fate that is self-reproducing. Boko Haram has destroyed a valuable portion of Nigeria’s moral fabric. They have caused chaos and instability in our socio-political life and even demoralised institutions. What did our leaders say they will do to them? They will pardon them. The Senate President, Ahmad Lawan, even proposed to send them to school abroad. Yes, and at the expense of the same nation they had helped destroy.

The other day, Senator Ibrahim Gaidam of Yobe State addressed a press conference where he made a case for Boko Haram members. He even had the temerity to state that he could not wait to see these terrorists enter “politics, religion, and society.”

In a society where maniacs are so indulged, why would violence stop? We have had countless instances of “religious violence” in Nigeria, but we have not had a matching number of trials and sentencing of the perpetrators. I agree with Buhari that violence in Nigeria is a cultural issue because our national culture has been to look the other way. If you are from a place like Kaduna, you can even get paid for all the violent acts you commit, and the governor will have no qualms saying so in public. Nigeria has no notion of justice and morality. The best we do is to appease genocidal maniacs.

In 2016, an Igbo woman, Bridget Agbahime, was killed by a so-called religious mob in a market in Kano. Even though her husband, Mike, identified the five killers, a magistrate court set the alleged killers free. Her murderers even got emboldened enough to threaten her husband’s life. The poor man had to run back to the East. There is no day I think of that story that I do not get enraged at Nigeria. What kind of country is this one? How hard could it have been convicting suspects who murdered in a marketplace and in broad daylight too? But Nigeria would not do anything to those people. The killers knew it, and that was why they could attack the woman in public. To say their actions were motivated by religious zeal is to miss the point. They knew aforehand that there was no punishment for their offence, simple.

That was how secondary school students in Gombe State could attack and kill their teacher, Christiana Oluwatoyin Oluwaseesin. Over the years, Nigeria has nurtured a group of entitled citizens that have come to believe they have the power of life and death over others. In 2011, when Buhari lost an election, you know how many Nigerians his devotees sacrificed to process their loss? Nigeria did not prosecute them. Life just went on as usual. For each orgy of violence that Nigeria overlooks, these people get more empowered, and they impress that knowledge upon the rest of us by doing more violence. We keep feeding the monster, and even now that it has grown hydra-headed and eating its master’s children, we still cannot face the truth. Buhari is hiding under abstract issues like “culture,” “climate change” and “population growth.”

Unfortunately, the rest of us too has been socialised into a culture where we were taught to never go against some people’s religious sensibilities because they are always on a short fuse. It was miseducation because it did not lead us to respect other people’s faiths. It only taught us to indulge criminals. That was why in 2016, when a Lagosian, Joe Chinakwe, was attacked by some people for naming his dog “Buhari,” he ended up being the one arrested. The police spokesperson that addressed a press conference on the issue, one Abimbola Oyeyemi, forgot his duty as an enforcer of law and order. He said Chinakwe had to be arrested because “the average northerner will feel bad over such a thing.” You have to wonder how it became the job of a policeman to justify crime on the grounds of cultural sensibilities. Well, that was because he had internalised the nonsense that some people deserve to be protected even at the expense of others’ constitutional rights. The same mentality was at work when a lawyer, one S.S. Umar of Zoo Road in Kano, wrote to the police and asked that an atheist, Mubarak Bala, be arrested otherwise they would kickstart violence. The police promptly obeyed! How better could the police have demonstrated that they have been neutered by these reactionary forces than the zeal with which they did their bidding?

Up till now, Buhari has not found the moral courage to face his Sharia clan that sentenced a man to death for blasphemy and tell them their little court ran its constitutional limits. He dares not. To do so would be to shatter their cultivated illusion that they are privileged citizens, and that would cost him politically. Northern elites like Buhari that have kept their population impoverished over the years pacify their army with the idea that they are special and could get away with anything. Those ones respond by offering their fealty of political support every year. It is an exchange that has become institutionalised, and Buhari lacks the will to break that vicious cycle.

So, when Buhari told Trump that Nigeria’s perennial violence problems are “cultural issues,” he was not telling the whole truth, but he did not lie either. There are no religious or ethnic killings here; there are only crimes of impunity.

If the perpetrators were motivated by religion, they would have demonstrated that much when some of their religious and political elite such as dethroned Emir Muhammadu Sanusi II and former Yobe State governor, Senator Buka Abba Ibrahim, were accused of adultery. They would have insisted on religious justice when Kano State governor, Abdullahi Ganduje, was accused of corruption. The fact that their violence is never towards the powerful should tell us that this is about domination of those they have designated their cultural inferiors.

Buhari was right on this, and for telling the truth this once, I almost rose to my feet to salute him.