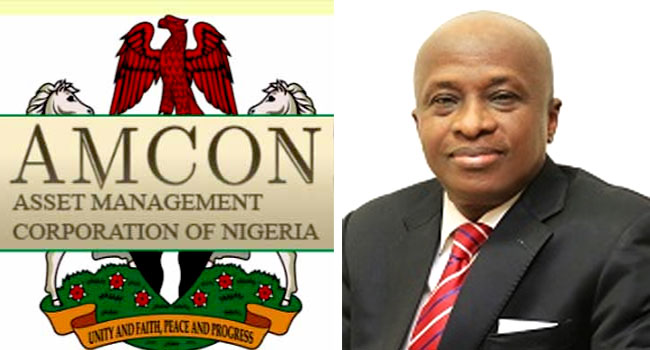 I pity this debt collector. At his wit’s end, this debt chaser, Ahmed Lawal Kuru, managing director of Asset Management Corporation of Nigeria, AMCON, took his case to Vice-President Yemi Osinbajo last year to seek his intervention. The corporation’s debt portfolio was in the region of N5trillion and the debtors were Nigeria’s apparently untouchable very important personalities, VIPs.

He needed the support of the presidency to beg, cajole and persuade the shameless debtors who live big on other people’s money.

What galled the corporation most was the fact that these debtors took the money, not for any profitable economic venture that would add value to the lives of the average Nigerian, or help the Buhari administration in its efforts to take 100 million Nigerians out of poverty into prosperity.

No. they used the money, or better still their loot, erroneously regarded  as their own share of the national cake, to oil their way into political office as senators, governors, pro-chancellors and ministers. And, now imbued with outrageous sense of entitlement and audacity, they give no thought to making good their promise to pay back.

Clearly there is no intention to pay back. And apparently nobody can do anything to them. No AMCON law, original or amended,  is potent enough to catch them or checkmate their activities. After all, they would ask, is the law not made by man for man?

The country may go under, weighed down by huge debt portfolio of N28.63trn – and still counting,  but  they can’t be bothered. Seemingly, they have found the Buhari administration amenable and pliant, initial fear of the 1984/85 Buhari having been sufficiently allayed. Even now, for protection, some of them have gravitated to the ruling  party.  They have a sense that once they are in APC, nobody can touch them. And for now, it seems to be working for them. Otherwise, these debts should not be piling up and these debtors would not be stumping around the country like a colossus hiding under the ineffectiveness of AMCON’s amended act.

Last week the AMCON boss led his team, not to the vice-president this time but to the Senate Committee on Banking, Insurance and other Financial Institutions. They apparently want the law to be made watertight as if the problem is  with the porousness of the law. It is not. The problem is intrinsically embedded in the DNA of the people and  official tardiness to move against perceived crooks. Apparently aware of the ineffectiveness of the law or their disregard for it, the Kuru team wants the Senate to “ pile pressure on some of our obligators who are very important members of the society.” This is the use of the carrot and the stick and the application of  moral suasion.

Last year when they sought the assistance of the Vice-President, this man of God with his priestly holiness and morality, promised that Government would henceforth have nothing to do with the debtors. No patronage of any sort. Government would treat them as lepers and declare them persona non grata. AMCON was encouraged to do its own bit. And its bit included publishing the names of the VIP debtors. In fact, Kuru and his team were going to go sensational about it. To name and shame them, AMCON threatened to do a full – length television documentary to show the unwholesome lifestyle of these debtors who have converted a humungous N5trillion to their own private use.

To underline the fact that these fellows were not fit to be regarded as role models, the television documentary, a blockbuster of the  Nollywood genre, would show Nigerians the sickening lifestyle of these VIP debtors who, like the vampire, are feeding fat on other people’s money.   One year later, Nigerians are still awaiting, not only the big stick promised by the Vice- President, but  this dramatic portrayal of the sickening debauchery and hedonism of those who have put themselves above the law and the society – believing that what their money cannot do, more of the money can do it. With money they can get power to bend the law in their favour.

For evidence that AMCON cannot hope for salvation from the Senate in the immediate future, you need not look too far back. Once upon a short while ago, the Federal Government set up an intervention fund to fast track development in two vital sectors of the economy, namely the power sector and the aviation sector. The Central Bank of Nigeria, it was reported, released N500 billion for the exercise. It, however, came to pass, like many other unexplained matters in the country, that these funds were suspected to have been mismanaged. The Senate Committee on Aviation, accordingly,  decided to probe the N120 billion of the N500 billion released by the bank.

Media reports in 2016 had it that the money had vanished into thin air. The beneficiaries of the N500billion were the Ministry  of  Power and the agency of small and medium scale enterprises as well as the aviation sector. At the joint hearing of the Senate committees on aviation and anti-corruption probing the disappearance of the funds, Mudashiru Olaitan , acting Director Development and Finance of CBN, disclosed that 10 airlines benefited from the fund through loans  monitored by the Bank of Industries.

Some of them, according to the reports, were Arik, Air Nigeria, Chanchangi Airline, Dana, Aero  and  Kabo. It was alleged that many of the beneficiaries diverted  the funds for other purposes, including purchase of private properties abroad. But at the said  sitting,  Minister of Transport, Rotimi Amaechi said neither his ministry nor agencies under it had any record of the funds. Senator Hope Uzodima, Chairman Senate Committee on Aviation, now Governor of Imo State, who presided over the hearing, expressed shock at the reports he was hearing. But, shock or not, the long and short of it is that both the fund and the probe panel report have all gone with the wind.

Aviation intervention funds have had, since the dawn of this Fourth Republic,  a notorious habit of disappearing into the thin air. Like other monies swallowed by snakes, this fund must have fallen  victim of turbulence during flight and got diverted  around the notorious Bermuda Triangle of inordinate corruption.

This  may be one of those mysteries that Senate probe panel would  find almost eternally difficult to unravel.  But, running out of options, it is to the same  Senate that AMCON has gone again for salvation.

Some or all of these loans predated the Buhari administration. But keeping to his swear words and the administration’s commitment to probity and accountability, the government, even if it can’t recover the money –  and I don’t see why it cannot –  the least President Buhari can do now  is not to make it possible for the same characters, obviously high profile looters, to continue at their game. Unfortunately, many of them  are the ones enjoying untrammeled government patronage.  And these characters are not in hiding. They are very visible, because they are very well known and well connected. But is that why they  move around with swagger and egregious hubris, with security escort to boot?

While AMCON waits endlessly  on government, it must show more creativity on its own within the parameter of the law to recover its debt. Even in law there must be some rough tactics to deal with rough and irredeemable crooks. To start with, it can at least go back to last year’s plan. Make blockbuster movies showing the lifestyles of these debtors. Take full pages of advertisement in major newspapers to name and shame them. And for its own credibility, it should make efforts to give wide publicity to  recoveries  made so far. This will not only  elicit public confidence in its activities, it will also engender public  support.