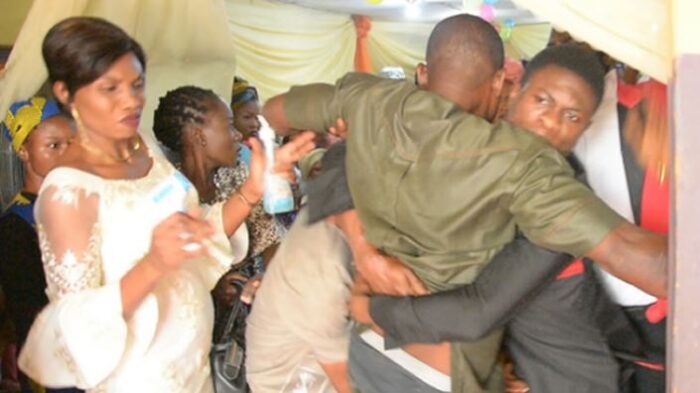 Ugly scene at the wedding

There was commotion on Saturday after a man stormed the Great Salvation Christian Centre aka Father’s church on Ako Road, in Ifako Ijaiye area of Lagos state to disrupt a wedding between his wife and her new lover.

According to reports, the man who identified as Iberemu Osadede claimed that the bride, Gloria was his wife. Osadebe insisted that he had a traditional wedding with Gloria, and they have a son together.

He, however, grew sick for about five years, during which time he traded most of his property to seek a cure.

The Imo State indigene was said to have later travelled to his hometown in Isiala Mbano, where he continued the treatment.

However, trouble started when he returned to Lagos on Friday, day to the wedding, and reported his plan to disrupt the wedding at the Agbado Police Station.

Upon arriving in the church around 11am, some of the church leaders, who saw him, pleaded to him to let the matter go, which he rejected.

Some members of the National Union of Road Transport Workers, who were said to be colleagues of the new groom, identified as Henry, were also invited to mediate.

Fervent prayers were offered against invaders and plots to interrupt the wedding.

The church’s minister was about to join the new couple when Osadebe’s family members stormed the pulpit, revealing the woman was already married and could not be joined in holy wedlock.