Home Columnist Crying, not the best way to honour Boseman – By Yusuf Mohammed 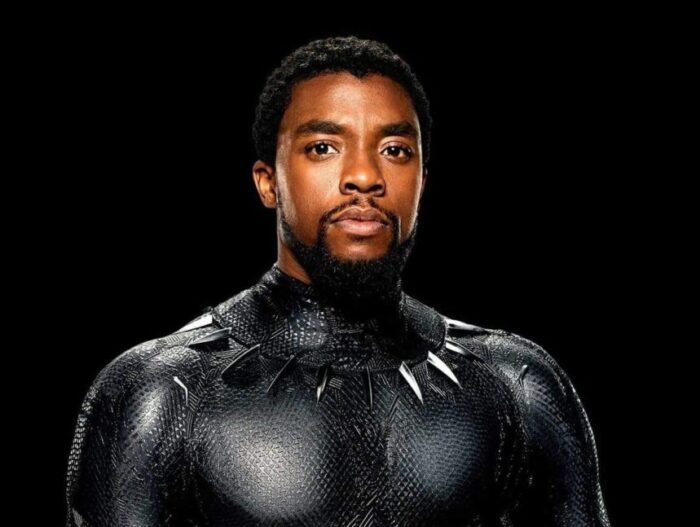 By Yusuf Mohammed
For many Africans, Black Panther meant a lot to them. By saying “Black Panther,” I am referring to Chadwick Boseman who passed away a day ago. Like many other people, I call him “Black Panther” the same way I called Christopher Reeves Superman.
When the movie Black Panther was released and shown in cinemas across the world, it gave Africans a sense of pride. Although it is very difficult for imperialists to give us a complete sense of freedom, I applaud the directors and producers of this movie for how they made us feel. This is not the time to talk about some of the subliminal messages in the movie. Right now I’m talking about the good vibes the movie gave Africans.

In the movie, the fictional African state of Wakanda had a broad mix of African cultures and it’s the most technologically advanced nation in the world but prefers to be seen as a third world country. A lot of people hailed the movie for a depiction of Africa not defined by colonization or by its relationship with the western world. 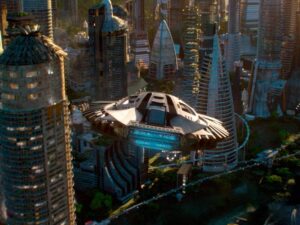 People went to the cinema in African dresses with people making an X with their arms across their chest. I had mixed feelings. I was happy about the feeling the movie gave people but sad that beyond feelings we don’t do much. That solidarity that we thought the movie gave us was short-lived. 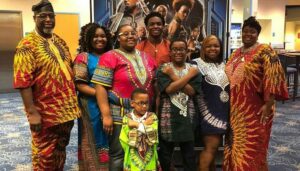 African Americans at the Cinema for Black Panther

On January 1, 2020, barely two years after the release of the movie, the message by many youths in Nigeria, the most populated black nation on earth, was one of individualism rather collectiveness. Many young people were making New Year resolutions that had to do with selfishness. Something in contrast to what we all need as a community if we are to break the chains of underdevelopment and imperialism.
With the death of Chadwick, suddenly everyone remembers Black Panther and what it meant to us. Why don’t we seize this moment and come together?
Sadly, it may just be wishful thinking because this isn’t the first time a great black figure would die. We have seen very big personalities die in the past. We mourned for a few weeks and that was it. There was nothing spectacular going forward.
From Nelson Mandela to Muhammad Ali, we all moved on without really taking a stand for the better.
Forgetting is even easier in this social media era when the next big news overshadows the current big news so fast that you forget the former.
News like “Messi signs for Manchester City” for instance would be so huge that it would dominate social and traditional media to the extent that Chadwick would be forgotten. And then it goes on and on, a cycle of forgetfulness.  Forgetting people or events that should actually motivate us to become better people has become a norm.
Please let’s not forget him in a hurry. Many of us don’t know much about his private life but love how he made us feel as black people due to his role as the Black Panther.
In the fictional Wakanda, I doubt if cancer would have taken his life. Wakanda is too sophisticated for cancer.

Those who have seen the movie would remember when Everett Ross (Martin Freeman) took a bullet for Nakia (Lupita Nyong’o). Ross was taken to Wakanda and got healed by tech genius, Shuri. Shuri is King T’Challa’s younger sister.

Through that movie, they’re simply trying to tell us that there’s nothing we as Africans can’t achieve if we put our mind to it. The world has become a global village and one of its disadvantages is that we (Africans) are at the bottom of the chain.
Individually, no matter how financially buoyant you are as an African, as a people we are poor. We are poor not because we don’t have the human and material resources to move up the ladder, but because we are comfortable with our status as a result of years of been brainwashed by Hollywood and the western media.
In many areas, we are always looking for validation from the white man’s land. That is why Grammy which is an American award is the pinnacle for all musicians all over the globe.
In the area of medicine, we have to accept that there is no cure for cancer and HIV/AIDS because that is what the white man tells us. Whatever they say is final. It is one of the reasons we have folded our arms while watching the economy collapse as a result of COVID-19 pandemic. We are literally waiting for the west as usual to come up with a vaccine no matter how long it takes.
While discussing Chadwick Boseman yesterday, some people said “Yusuf you always come from a different angle.” Of course that’s my job. My job is to make you see things from a different perspective. To awaken what is asleep in you. A lot of you are (King T’Challas) leaders but don’t know. A lot of you are more intelligent (Shuri) than you think. A lot of you have more to offer to your country. All you need to do is wake up.
If you are reading this, just know that a Wakanda is possible. If we come together we can have an Africa where we would have the cure to cancer and any other disease.
We have millions of talented young people who only need the right guidance. Like I said earlier, there’s nothing wrong in crying after someone dear to us dies. We can grieve all we like. But what happens after the tears?
I believe every sane African wants to see a prosperous Africa. Let’s go beyond symbolism and make Africa a continent we can be truly proud of. In my opinion that’s the best way to honour Chadwick Boseman.
Yusuf Mohammed is a journalist based in Lagos, Nigeria
Follow him on Instagram: @yusuf_writes