Home Columnist Naira Marley has delivered on his promise of N1m to me —... 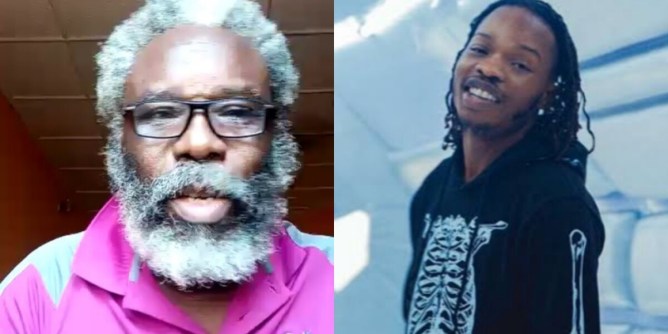 For actor, emcee and orator, Jude Ogomegbulem Chukwuka, he is a connector between the old and younger generations. Fame smiled on him recently as he became the talk of the town and everyone wanted to know more about his personality. In this chat with FEMI OGUNTAYO, the Delta-Igbo man, who is in his late 50s, explains how he came about the viral video, talks about his fluency in Yoruba language, his background and his career experiences. EXCERPTS:

Recently, you were all over the social media, trending over one of your videos in which you were seen singing and miming one of Naira Marley’s songs titled ‘Mafo’ word for word. It could be understood that you were just having fun, what informed your action and how do you feel about how the video became a huge thing?

Yes, I did the first series for fun, with music I am eclectic, and I sing, I dance, I just enjoy music generally. Whether it is old or contemporary, whether it is western or our local artistes here, I just take interest in music. So, I was just enjoying myself and it was Naira Marley’s Soapy that I did first and a lot of my friends wouldn’t have listened to it if I hadn’t done it. The responses I got was wow, they were like, Jude, if you didn’t do this I wouldn’t have known what this guy was saying, after all there is nothing bad about what this guy was saying. So, for me, that was how it started and till date I can’t explain how it became a huge thing. That was a start, but the subsequent ones were done because I found myself like a trans-generational connector, my own generation wouldn’t listen to what they are doing now, because they see it as a lot of noise. So I just found myself making them gravitate in the direction to this music.

Naira Marley was impressed too, and promised to give you a million Naira, when you heard about that, how did you feel and have you spoken with him?

Naira Marley was not the only one impressed, thousands and millions of people globally were impressed. I believe the global interest was spiked primarily by Naira Marley’s interest and his offer of one million naira and when I heard about it, I didn’t know how to feel. I had never been offered a million naira as a gift before, you know, I felt very funny. Besides, the whole world wanted to tell me Naira Marley was looking for me and that in itself was another kind of pressure. Everybody was searching for me and it wasn’t an easy thing for me. Yes, I have spoken with him and he has delivered on his promise. I appreciate that very much.

Your followers have increasingly grown on Instagram since that time. Would you regard that as a boost and more motivation to your career as an actor, MC and orator?

This is not blowing one’s trumpet, I am good at what I do, I am an actor, I have been doing that for 28 years and I believe strongly and have heard people say that I am good at what I do. Has it impacted my followership on Instagram? Oh tremendously! Have I been having offers in these areas you have stated; actor, MC, orator? Yes, I have been having offers and I appreciate that. It is a boost that I required in my career as an actor, as an MC. As an orator, that is in-born. So, whether I have followership or not, I talk well and I appreciate that.

Your indigenous Yoruba TV Show, ‘Owe ati Oro Ile Yoruba’ became more popular after your viral video, what do you think about this?

Yes of course, everything I do online has been spiked by this Naira Marley’s endorsement so to speak.

Your name, Jude Chukwuka, is purely Igbo. People would like to know who is Jude Chukwuka? Tell us about you, your background and growing up?

Jude Chukwuka is born of two Igbo parents, Sunday Idibia Amaka Chukuwka and Nora Chukwuka, nee Ofulue. Both are Delta Igbo, my father is from Aniocha North Local Government Area, while my mother is Ubuluku in Aniocha South Local Government Area. They are both royalties and are prince and princess. I am the fifth of seven children of my parents and I attended St Thomas Aquinas Primary School Atunrase Surulere. From there to Bishop Hagae Secondary School in Mushin, then to Federal Polytechnic, Ilaro to study Accountancy and later to Yaba College of Technology for my Higher National Diploma in Accountancy. I was born in Lawanson, a cosmopolitan environment and that is why I can dabble in so many languages. There are different people from different tribes on my street then; there are Efik, Ibibio, Agbo, Owerri, just a mixture of different languages. That was where I picked some of these languages; I am happily married with three children. Growing up wasn’t easy, my parents were royalties but they were people who believed in the works of their hands not people who will live off their royal statuses. My mother was a petty trader, my father an electrician, both of them proud of what they do. Maybe that is where I got the pride now, concerning what I do, both of them are late now but I miss them a lot.

According to a report, you learnt how to speak Yoruba fluently when you featured in the movie ‘King Invisible’. Why do you understand the Yoruba Language this much?

One of my favorite adages in Yoruba is, ‘Imu Aja ti tutu k’oye to mu’, which means, the dog’s nose had been cold before the harmattan. My Yoruba speaking has been fluent before ‘King Invisible’. What I did on the movie ‘King Invisible’ was that the director wanted somebody who can chant but having it in mind that it was a Christian film, I consulted a friend of mine – Ajayi Olawore. Both of us looked into the scriptures and we translated some parts of the scripture into Yoruba and I took them like chants. So that was it. I did not learn to speak Yoruba fluently on the set of ‘King Invisible’. Even the director Femi cannot speak half of the Yoruba I speak.

Would you recap how your career started as an actor for you?

I started acting in 1973, when Archbishop Olubunmi Okojie was ordained the bishop of Lagos and he was visiting the parishes under him and he had planned to visit my church then at S.S Mulumba and Davids in Lawanson. So as a member of the holy family group, we had prepared a drama piece – The Good Samaritan. I was one of the thugs that beat up the victim. So that was how it started for me, but ironically that day, I couldn’t perform because I took ill. My house got a beautiful visit; the bishop came when they told him that one of the cast took ill. He visited me and prayed with me. That was a big and awesome experience and I appreciate that a lot. So that was the first time I dared to act. However, it started in the church again, New Estate Baptist Church, in Surulere, where I met Israel Eboh, who is currently the President of National Association of Nigerian Theatre Arts Practitioners (NANTAP). That was where I met him in the early 90s and after performing in church, he introduced me to commercial and stage acting and my first ever stage acting was Elechi Amadi’s . The concubine as adapted by Godswill Okie, who is also my friend. It was a wonderful experience and I appreciate that very well, but as a screen actor, I started 15 years ago – 2005. Where I had an audition in the TV series called ‘The Station’ and I played the role of ‘Daniel Pam’ on that set and I can say proudly that I was the only lead cast that played the whole 52 episodes. That was a wonderful experience because it took me around Nigeria, Port Harcourt, Jos and that was how my screen play experience started.

After the ‘Mafo’ video, a lot must have changed for you. Could you share with us some of the new experiences?

(Laughs) Definitely, after that ‘Mafo’ video, my life was transformed. The most painful thing, though positively painful thing, was that I cannot walk peacefully on the street again. Everybody keeps saying ‘that’s Naira Marley’s father’. Good experience? Yes! A new one? Yes! Enjoyable? Yes! I am still basking in that euphoria, it has been wonderful. (Laughs)

What would you say are the effects of the coronavirus pandemic and lockdown to your career? Positively or negatively?

The coronavirus lockdown has positively affected my career, because it was the pandemic that had turned people to online education, entertainment and relaxation and it was at that time that this ‘Mafo’ video exploded and the eruption was possible because people, at that time, were mostly online. I am heading 60 years of age and I observe the COVID-19 precautionary rules. I maintain social distancing and I wear my face mask.

How would you rate the present day Nollywood?

Nollywood is improving, but there are no indices to measure adequately the kind of growth and know how to drive it. In terms of picture quality, technically and in acting too, things have improved. But in terms of pay, I will say a total ‘No’, we have not gotten to a stage where an actor will do just one or two production a year and say he is satisfied or fulfilled. So, if that is the index we are looking at, it is not improving. The gap between the producers and the actors themselves are growing to the extent that actors are beginning to think they have to delve into producing and directing. I am not saying that the person who invests his money should not make profit, but I am saying the person should not skin the actor to run and make profit. When producers come to you, the first thing they tell you and the most annoying opener is that there is no money on the project. If there is no money on the project, why don’t you pack up? Most of them get money from their executive producers and the first thing they would go and do is to buy a house in Lekki. Then they come to tell you it’s a low budget film, the next time you will see that person telling you it is a low budget thing, he is cruising a big car.

What would be your advice to would-be actors?

If you want to be an actor, make sure you have another stream of income, but such a stream should not hinder or kill your passion for acting.

Your words to Nigerians, the youths and your fans at large.

To Nigerians, they should resist all forms of enslavement, political, academic, whatever. Then Nigerian youths, get positively engaged, seek worthwhile knowledge, and my fans; keep believing in me. God bless you all.