Home Columnist Something about this Stella – By Yakubu Mohammed 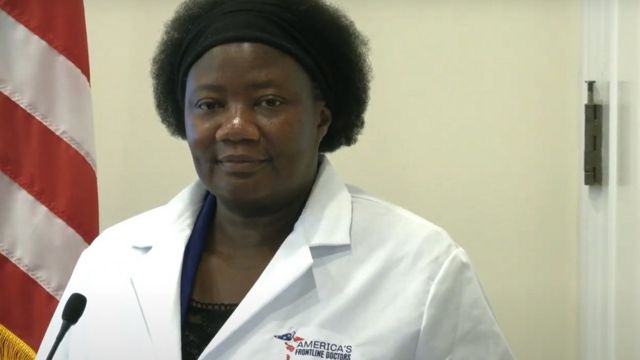 Stella is not a Nigerian. She is from Cameroun. This was the first reaction I got on social media when the “ satanic” video of this irrepressible medical doctor, Stella Immanuel, went viral on social media attracting 80 million views world-wide.

She had  travelled  all the way from her base in Lousiana, Texas to Washington DC to participate in a press conference addressed by group of medics called America’s Frontline Doctors.

Stella advised fellow doctors to rise to the occasion and do battle with Covid-19 using Hydroxychloroquine.

“It works” she declared and challenged those that were mounting a campaign against this drug, which  has been around since about 1934 to provide genuine evidence against  it as opposed to their fake science.

Beating her chest with pride, she said she had used the drug, popular for malaria treatment under various names – nivaquine, camoquine etc. – to treat 350 Covid-19 patients in her clinic. And this feat was without side effects and no single fatality. She made bold to say, against conventional wisdom, that there was  no need to wear mask or be locked down or die needless death.

President Donald Trump, an early convert to  Hydroxychloroquine as an  effective cure for Covid- 19, quickly lashed on to the Stella video and retweeted it widely on social media, ably assisted by his son Donald Jr. The president says he is a big fan of Dr Stella Immanuel because “ I am very impressed with her and other doctors that stood with her.”

But not everybody is Stella’s fan. Not Dr Anthony Fauci, the controversial American epidemiologist, nor the big pharmaceutical companies.  Surprisingly, not  even her fellow Black doctors. True, her claim was iconoclastic, bombastic  but not necessarily untrue.

But, I must confess, she sounds convincing though seen in some quarters as a direct challenge to the  conventional narrative promoted by World Health Organization, WHO,  that there is no cure for Covid-19 and no vaccine in sight yet. But with mounting fatality across the world, Stella, is bravely, but with prickly embarrassment to health authorities, sticking to her gun. At every opportunity, she does not shy away from  proclaiming loudly that there is  cure for Covid-19 and that is Hydroxychloroquine combined with zinc and Zithromax. 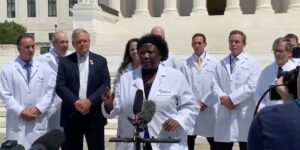 Dr. Stella Immanuel with fellow doctors behind her

There is definitely  something about this Stella. Without any doubt, she is possessed of the right stuff. An activist and owner of Fire Power Deliverance Ministry, she possibly has  more than the normal dose of  what you may regard as courage of conviction.

This amazon of a woman was trained in Nigeria at the University of Calabar  in 1990 as a general physician and went to USA to specialize as  paediatrician.  Now a citizen of what used to be called God’s own country until the man called Trump chanced on it, Stella is not only making waves, she may also, unknowingly, be expanding the frontiers of freedom of speech and of belief.

It does not matter that  Facebook, Twitter and other social media platforms  chickened out by pulling down her  video for allegedly violating policies on Covid-19 misinformation. Despite that, the 55-year old doctor waxed stronger still, challenging her opponents, including Dr Fauci to a medical duel. She claims that those other doctors who want to take her to the cleaners, in fact, don’t practice; they have no patients while some of them are secretly, stealthily, if not selfishly, taking this wonder drug regularly as prophylaxes to prevent infection. She is fighting a cause and she is willing to throw in all she has including her life or her medical license. What, she asks, is the worth of her life or her license when people are dying needlessly of a disease that can be prevented or cured?

But why, one must ask, are some Nigerian doctors joining the battle against her in the face of clear evidence that even some advanced countries like India, France, and Turkey have switched over to the drug because of its efficacy? If Dr Stella Immanuel is not right in her claims, then  our own Bala Mohammed, Bauchi State Governor, must be wrong. A survivor of Covid-19, the governor gave a public testimony of the efficacy of Hydroxychloroquine drug which cured him when he contracted the virus. And he demonstrated exemplary leadership later when he said he would take responsibility for his people by directing health care givers to extend same treatment to those who had been infected.

So far, Nigerians have been treated to a cocktail of stories from the Covid-19 survivors. On one hand we are told there is no cure for  the dreaded disease while on the other we are told, mercifully, that it is not a death sentence.  And if it is not a death sentence, it follows logically that something is curing those who are being discharged. Some people have unfortunately died in isolation – something must kill someone when it is God’s time. Perhaps it is time to improve on Covid-19 communication and change the narrative from fear to hope.

By the WHO judgment and pronouncement from the throne, there is no vaccine in sight. It is still a long short. In fact, vaccines take up to five years to discover and produce.

But, surprisingly, only six  months after the outbreak of this pandemic, Russia has announced it would commence mass vaccination of its people starting from October this year. Since Russia is not Africa, I am not likely to expect any disapproving noise from any quarters. Don’t ask questions about the Russian breakthrough because you will not get any answer.

We, at home, may be laughing at Madagascar now because, apparently its concoction – that is what it  may have come to – has not lived up to African and Nigerian standard. Meaning that there is no show; the Covid-Organic, for Nigeria is a non-starter.  But my information is that the test Nigeria conducted on the Madagascar experiment was, true to type, not thorough and accurate enough.  So, we can kid ourselves and ignorantly pooh- pooh it. But it is still in use in the home country though its potency, I am told, reduces through the manufacturing process. But if taken like our localagbo, according to knowledgeable sources,it remains as potent as it is efficacious. That is Madagascar. And with their indubitable spirit, they will not give up.

What about our dear country, Nigeria? Apart from Professor Maurice Iwu’s enterprising spirit whose outcome is still awaiting clinical trial, not much is heard from our numerous scientists and professors in this respect. While we are waiting, Nigerans should not die needless death. Our health authorities should embrace what is convincingly a potent cure for Covid-19. And while we are suitably attired in our face masks, we should not forget to observe  all the other protocols of Covid-19. We have no other choice for now –  until perhaps  when Russia or China comes to  our aid. 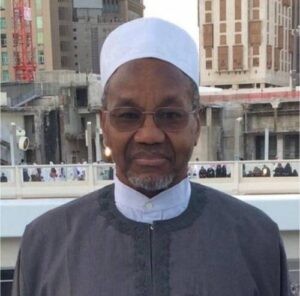 Mamman Daura’s kite?Stripped of rabid politics, Mamman Daura’s prescription for choosing or electing our leaders strictly on merit and competence would have made a lot of sense.

If Nigeria was indeed one indivisible, united nation with all its citizens happily living in any place of their choice and enjoying rights and freedoms associated with citizenship, it would have made more sense to demand and insist that our leader or leaders, can come from any part of the country but they must be persons of proven competence, patriotic, broad-minded, fair and equitable disposition irrespective of place of birth, ethnicity and religion and such other primitive consideration.

But because Nigeria is far from being an ideal society, a  nation-state that is fair, just and equitable, the political parties, in their absolute wisdom, have settled on rotation of the presidency between the North and the South without sacrificing competence. It is not the best arrangement, but this is the only choice as close to the ideal as possible. It is left for the contending political parties to prescribe more stringent qualities for their respective flagbearers so that whoever emerges as leader is seen to belong to all and belong to no one or no section in particular.

For now, Malam Mamman’s patriotic idea is one whose time has not come yet.