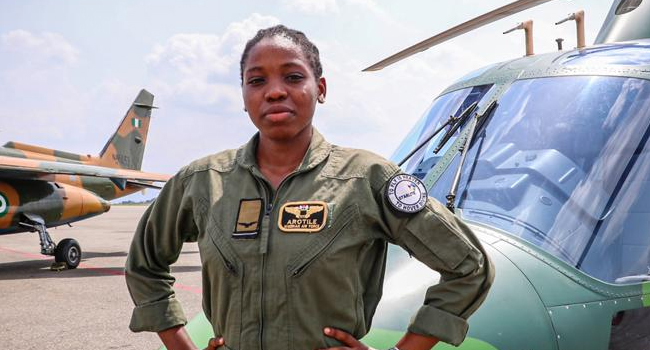 It is miscellany time again, when this column tries to attend, with broad strokes and in short takes, to a glut of occurrences, lest those who make the news and those who consume it feel ignored.

The point of departure has got to be the death, at the unripe age of 25, of Flying Officer Tolulope Arotile, the first Nigerian female helicopter combat pilot, in a freak accident heard around the world.

Accidents are formidable things. They happen even to the most cautious and the most prepared, at the least likely moments and in the least likely places. A person who can swim across a river churned by strong currents may drown in a bathtub.

I know a man who ran over and killed his young son while backing his car out of the garage, unaware that his little boy had followed him out of the house. Thousands of children are killed in this manner every year in the United States and across the world.

From the official account, the accident that claimed Tolulope Arotile’s life would seem to belong in this category.  She was walking along a road at the Air Force Base in Kaduna when her high school contemporary driving in the opposite direction – with two other contemporaries of Arotile’s as passengers — suddenly recognised her.

Excited at seeing a former school mate who had succeeded so admirably in a rarefied field, he put the car in reverse gear and revved up with the aim of catching up with her and giving her a befitting Nigerian greeting.

In the event, the car struck and killed her.  The reader deserves to be spared the numbing details.

At first blush, the account seems too pat.  The sequence of events cannot easily be dismissed as trifling coincidence.  Yet, there is plausibility in that account – much greater plausibility, it seems to me,  than in the conspiracy theories that have been woven intricately around the matter, some of them grounded on the wildest conjectures and going back to the dawn of creation.

Beyond stirring ethnic passions and animosities, they serve no purpose.

It has been established that Arotile had been summoned by phone, barely two hours before her tragic end, to the Air Force Base, in Kaduna.  She had the day off, and was reluctant to go to the Base.  But her sister encouraged her to go, and personally dropped her off there.

To what particular facility was Arotile headed at the time of the accident?

Was the area monitored by CCTV or other electronic security device? Where are the tapes?

Besides the persons named in the official account, were there other persons – eyewitnesses in particular?  What was their recollection?

Did the authorities make a map of the accident scene, a first crucial step in such circumstances?  Why was no such picture furnished with the official account of the incident?

What the public has been told so far points to an instance of culpable homicide.  But given the unsettling gaps in the narrative, the authorities must pursue every lead to unravel that matter and squelch the conspiracies swirling around it.

Anything less would be unworthy of Flying Officer Tolulope Arotile who, by her courage, skill, valour and commitment in a field dominated by men, wrote herself into our hearts and minds, and into Nigeria’s history.

Ever since Senator (as he then was, and has since ceased to be) Dino Melaye threatened on the floor of the National Assembly to ravish a fellow distinguished Senator and wife of one of the nation’s leading political figures and was not called to order nor censured, that body has come to be regarded as a place where anything is not merely possible but everything is actually permissible.

Recent disclosures before the Assembly’s oversight committees suggest powerfully that it is not about to turn its back on its well-earned reputation.

A Minister who couldn’t keep his hands to himself gets by way of reward a “dirty slap,” presumably on one of his fattened cheeks, from the object of his concupiscent desire, the winsome chief executive of one of the parastatals under the Minister’s portfolio.

The scorned Minister strikes back in an ad hominem riposte – or in justification — disclosing that the lady in question has, or has had, four husbands, the implication being that she must be fair game.

To do maximum damage, he leaves entirely open the matter of whether the marriages were consecutive or concurrent. If consecutive, nothing in our laws forbids them.  If concurrent, that would constitute polyandry, which our laws and custom categorically forbid.

I gather that the nation’s chief law officer Abubakar Malami (SAN), not one to allow the most tangent breach of the law to escape his watchful attention, has set up a special investigation panel to look into the matter with a view to bringing charges.

The Assembly abruptly closes shop, and the presiding officer has the mic turned off when proceedings reach the point at which the harried Minister was going to reveal the true names and identities of members of the Assembly who had plundered through unfulfilled or partially fulfilled sweetheart deals the resources of an intervening agency under its supervision

“It is okay.  It is okay,” the Assembly chorused.   Okay not to reveal the names, that is, and conflict of interest be damned.

Since the return to a species of democratic rule in 1999, the oversight function of the National Assembly consecrated in the Constitution has morphed into a form of racketeering, a cover for extortion and manipulation.

During one of  the re-run gubernatorial elections in Ekiti State, the chair of the Assembly’s oversight committee on elections and a ranking senator from one of the political parties contesting the race was found directing operations in the collating room of Independent National Electoral Commission.  Asked what he was doing in such a sensitive setting and at such a sensitive time, he replied calmly that he was performing oversight duties on behalf of the National Assembly.

If the chair or any member of the Senate’s oversight committee on banking and finance were to be found today lurking in the vaults of the Central Bank or the Mint, you can be sure that he will have a ready answer: oversight duties

They are already richly rewarded for a raft of duties, pseudo duties, and non-duties. To them, too much is never enough.  They believe, with Oscar Wilde, that nothing succeeds like excess.

Still in the news:

A great many of our compatriots, among whom I count myself, have been skeptical of Kogi Governor Yahaya Bello’s proclamation that his domain has been, and remains, a no-go area for the malignant coronavirus.  It can never touch him nor anyone in his domain, he has been insisting.

It is true that you cannot be in the same space with him (they call him “little napoleon” behind his back, I gather, more in derision than admiration) unless you are decked out like Lagbaja.  It is time to drop our knee-jerk skepticism and take him at his word.  After all, he has been nothing if not unyielding.

Since Kogi State is now and forever hermetically sealed to the corona virus, it does not need the N100 million grant that the Federal Government is set to award each state to contain and combat the pandemic.

Bello has accused other states of conjuring up cases of coronavirus disease for the purpose of fraudulently collecting federal money and is on record as having vowed not to follows their despicable example.  So, why pile him with money he has not asked for and does not need?

We are confident that His Excellency the Valiant Conqueror of the coronavirus, and withal a man of honour, will forcefully reject the blandishment.