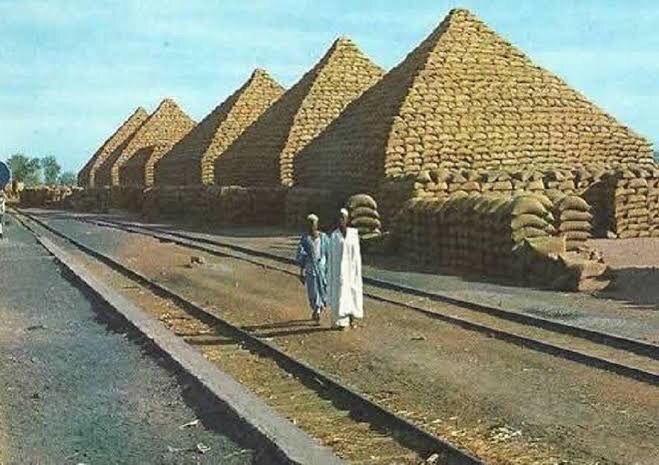 Ground pyramid in Kano in the 60s

It is advisable, even if for historically nostalgic value, to take a look at the past once in a while even as an annual academic exercise to celebrate the country’s gains and lament its losses.

President Muhammadu Buhari, a man of few words, last week surprised his fellow countrymen in his Democracy Day broadcast. He spent nearly 45 minutes reading the speech, and he attempted to do a bit of looking at the past.

But instead of the usual lamentation – how corruption of past leaders drove the country into the mud –  he reeled out some of the gains of his own administration during the past five years and hoped, despite the setback brought about by the worldwide covid-19 pandemic, to pursue vigorously  the administration’s three cardinal programs – security, economic revival and the fight against corruption.

It is now common knowledge that, try as he may, no Buhari speech would satisfy all  critics and analysts. And they are at liberty, therefore, to debate and agree or disagree and even to reach the  conclusion that this particular speech fell short of expectation  – one critic was even heard as saying that the Democracy Day speech sounded like Buhari’s budget speech.

Whatever the  critics may say, I remain fascinated by the president’s speech  last year when he launched the maiden edition of Democracy Day on June 12.  In that  speech, President Buhari enunciated what I regard as his grand ambition for the economy.

“Last June 12, the day he launched the maiden edition of the nation’s new Democracy Day, I saw in him some flashes of inspiration that can be likened to a grand vision for the country – an ambitious desire, if not plan, to take 100 million Nigerians out of poverty into prosperity in the next decade.”

A social media post from a friend bears relationship with the president’s ambition to do for his countrymen and women what China, Indonesia and even India have done for their respective people. But going forward, in my view, requires looking at the past  and taking into account  what the country, in so short a time after independence in 1960,  had raked into the economy that is worth remembering. They were part of  the   tangibles that qualify us to be called the giant of Africa.

And it is worth bringing it to the notice of the president as he marches on with his grand ambition – whether or not it is still sustainable or realizable  in view of the egregious blow to the nation’s economy by the unholy alliance of  Covid-19 pandemic, the general state of insecurity from Boko Haram, the cattle herdsmen and the unidentified bandits that have driven farmers from the farm thus  rendering agriculture one of the most vulnerable features of the national economy.

It is worth recalling that before the advent of oil, agriculture was the mainstay of our economy. Cocoa in the old Western Region formed the bulk of the region’s economy and all the wonderful feats that Chief Obafemi Awolowo performed happened because of a savvy deployment of intellect and his sound economic management. But the resources were there.

The North boasted of the groundnut pyramid of Kano and the East and large parts of today’s North Central Zone depended on palm oil cotton and other produce from agriculture. That Malaysia in 1945 exchanged some oil palm seedlings with Nigeria’s better variety and went ahead to grow its own industry while  Nigeria eventually left its own in the lurch  is not an idle tale by moonlight. Whatever is the veracity of this story, it proves one point: It was not really the discovery of oil that gave rise to the numerous industries that formed part of the nation’s economic boom.

In the patriotic effort to bring 100 million Nigerians out of poverty into prosperity, I recommend that the president commission a study into what fate befell some industries that sprawled the length and breadth of the country in those heady days. Reviving them, where possible, will go a long way in boosting the employment possibilities under the president’s ambitious scheme.

What, for instance, happened to the tannery in the North that produced leather both for export and for domestic shoe industry that gave birth to Bata shoe and Lennards shoe factories?

With the return of Bata shoe factory in Abuja, one should hope that others would be encouraged to follow suit to promote not only competition but quality and less dependence on foreign shoes. Will the tannery come back?

Arewa Textiles Industries as well as Kaduna Textiles  made popular local fabrics and provided thousands of employment opportunities for youths that migrated to Kaduna, making KDJ the place to be for any young school leaver in the 60s and 70s. To get the Northern youths more profitably engaged today would require more factories to complement  the ones in Lagos and its environs.

But like other industries, the textile industries, numbering about 250 in the country, are plagued by shortage of raw materials, smuggling of foreign finished products and lack of spare parts for the machines. To cap it all, erratic power supply is one of the serious drags for manufacturing industries.

Once upon a time, Nigeria’s locally assembled Peugeot  and Volkswagen cars  were the dominant features of Nigerian roads. The cars were easily available and were also affordable, but a combination of Nigerian factors drove them out of Nigeria market.

They were replaced by Japanese cars of all shapes and sizes  but  there seem to have been no official policy to compel the Japanese to have a plant in Nigeria. Suzuki is going to Ghana but Nigeria, the so-called giant of Africa, will be left with the short end of the stick. Despite the much- trumpeted ease of doing business, the country, plagued by insecurity and corruption, has neither proved to be  enough attraction nor has it  put sufficient pressure on the Japanese companies to put their plants in the country.

Does it worry the egg heads in the ministry of commerce and industry or  is it that the country is merely  content with its oil nation status, albeit one that cannot as much as keep its refineries  working but prefers to import refined petroleum products with its inherent corrupt incentives?

Apart from the  Kaduna and Lagos plants that have stopped assembling Peugeot and Volkswagen cars respectively,  do they, these officials in Abuja  –  do they remember that this country once had Leyland in Ibadan and ANAMCO in Enugu, all of them producing buses and trucks? And in Bauchi, the country boasted of Steyr trucks for agriculture.

But we have not stopped talking about agriculture even if glibly. And we shall continue to have a flip-flop policy on agriculture so long as the oil wells continue to pump.  But they will stop one day, soon. The current inability to sell crude because of the covid-19 pandemic ought to be enough warning signal.

President Buhari’s ambition to pull  100 million Nigerians out of poverty and into prosperity  in one decade, I am convinced,  is not meant to be one of those idle political promises that are meant to be shredded as soon as they are made. But If he needs the next three years to lay the groundwork for the fulfilment of this dream, then the Buhari team must begin to realize that the time is running out.

When he made that promise, exactly one year ago, he did not factor the Covid-19 pandemic into the equation. This impish and invisible enemy of progress has put a spanner in the works and the outcome is anybody’s guess.

But  the president was not unaware of the Boko Haram factor. And he must be aware too that  the incessant raids by killer-herdsmen into other people’s farms and the armed bandits’ insouciant thirst for people’s blood have all combined to imperil our drive towards a truly agrarian revolution.

If indeed agriculture should add up to petroleum and the manufacturing sector to help the president to  realize an otherwise tall but ambitious order – the poverty to prosperity drive – then he must quickly develop  a strategic security formula to put a stop to  the incessant killings not only in the North but the whole country so that Nigeria can truly become an investment destination.