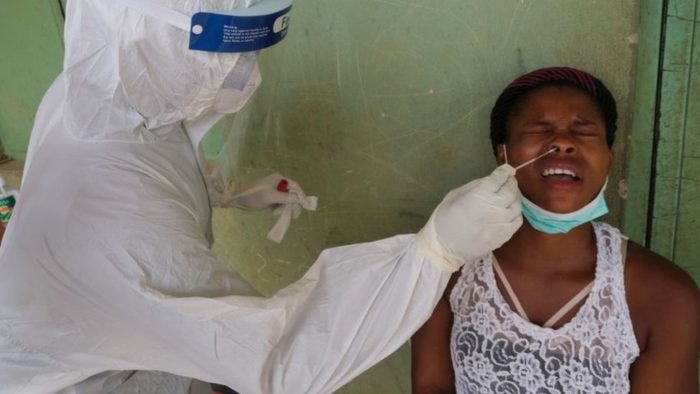 Coalition of evil. That, in my view, is what Covid-19 pandemic and the unholy alliance of bandits, kidnappers, armed robbers and the army of rapists  have formed. And they have done so with all other existing enemies of humanity – Boko Haram, and co  –  to bring the rest of us down to our bended knees.

But our collective determination is to ensure that this diabolical coalition fails woefully in its evil mission. That is if the good decide to unite against the bad. What this season of anomie calls for is for all men of goodwill, no matter how few  their number, to go into a formidable  alliance to do battle with the evil forces that are fast spreading their infernal tentacles across the nation.

In the lead is this evil virus that made its entry into the country in February this year.  We have just marked 100 days of the pandemic. With one index case imported into the county in February, Nigeria has recorded nearly 12,500 cases as of Monday with  fatality figure of  about 350. Despite the spirited efforts to contain it, we have suffered major losses.

With lockdown and movement restrictions, the economy has been battered. Social, religious and cultural lives have been dislocated to such an unbelievable extent  that  in our  life-time, Christians and the Muslims have been denied access to their respective places of worship while  schools  have remained closed.

With face masks  that  make us look like strange masquerades and the accompanying social distancing, we have become strangers to one another. Neighbors and long known acquaintances have become mutual suspects – you are avoiding them, and they are avoiding you.

Sometimes even the best among us have been forced to take leave of their senses.  With all the good work our Covid management team – the PTF and the NCDC –  has been doing to keep us safe and alive, they have had to cope with some policy summersaults, assorted conspiracy theories, not to add the invidious harm of social media’s fake news.

Sometimes they appear overwhelmed and are forced, it would seem,  either to speak in tongues or to do so from both sides of their mouths. But  they deserve our pity.

Up to now I keep wondering, for instance, what the  cerebral and indefatigable minister of health, Osagie Ehanire, did to deserve the treatment he got  via the importation of the 15- member team of Chinese experts that came to help us with our Covid exploits. The minister was at the airport on April 8, red carpet and all, to receive  these  doctors and nurses. They arrived in a hail of controversies but quickly disappeared into the blues.

And the exasperated  minister  was later  to disown them and to plead  to be left alone by the press. The Chinese experts, he was forced to admit, were not guests of the Federal Government but of the China Civil Engineering Construction Company, CCECC, doing a roaring business in the country.  And when they left  – have they left? –  nobody knew when they did.

This was part of the Covid blues.

But is this enough  reason why, despite the daily figures of new cases and deaths nation-wide,  some people still live in denial. Or simply because some  can’t trust their government?  They prefer to believe that there is so much fake news and deceit mixed with facts and fiction. And to make  matters worse, we have some  governors whose undue radicalism seems bent on giving a lie to most of the  pandemic marketing and sensitization.

And the country remains locked down. Not only have we not found cure or relief, the panic and the grip of Covid-19 has made us  to lose sight of other ailments known to be prevalent in our community – malaria, cancer, hypertension, high blood pressure, diabetes which are all killer diseases.  And in a very unfair manner, our  Covid warriors have also allowed Covid-19 to appropriate all the symptoms of our indigenous diseases and ailments. Covid-19 now wears the toga of common flu and cold. So now you cannot sneeze and you cannot cough. You can’t even clear your throat. If you do that, you are automatically a candidate for Covid-19 test. And there is a  real possibility that nobody dies any more from any other ailments but Covid. And that would not be funny.

And our locked down country that is going through this psychological trauma  is also at the mercy of horrendous insecurity problems. Bandits that seem to have given the country a moratorium of peace during the early days of the pandemic have resumed their  operations with a vengeance. From Sokoto to Katsina to Kaduna to Taraba and Benue, it has been  a feast and a festival of deaths and destruction for the bandits.

These bandits and armed herdsmen raid freely unchecked and they maim and  kill at will. No fear of consequence because there has been none. And  they are truly a law unto themselves.

But one day soon they are certain to get their comeuppance, these soulless bandits. At least, President Muhammdu Buhari said, after the recent Katsina carnage, he couldn’t take this personal assault right in his home state lying low. He told the armed killers to give up or they would meet a “ disgraceful end.”  And I say aammen!

In Kogi State last week, it was not the story of the bandits. Instead, it was that of 25 dare devil armed robbers that came calling in broad day light to Isanlu to empty the vaults of a bank.

To facilitate this operation, they broke into three groups –  one group to keep vigil on the way out of town, the other one went for the money and  they shot to death  a policeman on guard duty and emptied the vaults. The third group went straight to the police station where they killed the Divisional Police Officer and  seven of his officers including a nursing mother.

But this cocktail of horror needed an ice on the cake. And that would have to come from the  equivalent of a horror movie – the gang raping of girls by hoodlums who have clearly sold their souls to the devil.

The rape epidemic must have been going on quietly until the  recent one that got the whole country mad. It  was the gruesome murder of an undergraduate student of the University of Benin after she had been raped. During the lockdown, Uwaila Omozuwa, 18 years old, decided to keep herself busy with her books. She went to a nearby church. But the devils met her in the House of God of all places,  raped her after which they clubbed her to death.

Like Clovid-19,  this rape epidemic spread wildly to Ibadan. Another student, Barakat Bello, came out of the bathroom in the afternoon and met a gang of robbers who raped her and killed her  in her father’s compound, the safest place for any girl to be during this lockdown.

The same day the hoodlums stopped over in Ekiti State where they highjacked a street hawker in Ado Ekiti and meted the Barakat treatment to her in broad daylight. This new wave of rape epidemic is not limited to the South. In Kaduna State, notorious as the epicenter of ethnic bloodletting, rape has been added to the  sorrow of humanity.

For now, there are no simple ways out. Except possibly a return to God.  At this defining moment in our country, in this season of anomie, the  prayer warriors who usually invoke the powers of the Holy Ghost fire  are most welcome. Ditto for their Muslim counterparts all over the country.

What is facing the country today, this coalition of evil knows no tribe and no creed an it is no respecter of status; the rich and the poor have no hiding place.