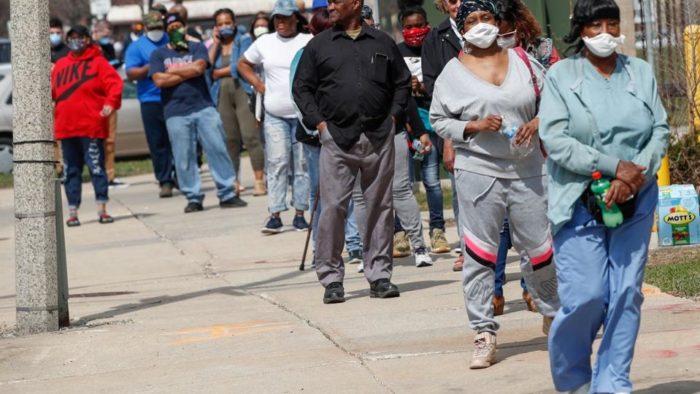 I wanted to believe the comforting thought that, when it comes to coronavirus, we are all in this together. That knowing we’re all equally at risk, we’re pulling together in the same direction, bearing the strain equally.

The false nature of this belief was initially most obvious in relation to class. Once the lockdown was imposed, a gulf very quickly opened up between those on full salaries working on laptops from home, fretting about having to cancel Easter holidays, and those living hand to mouth, fretting about how to feed their children and avoid being made homeless.

Government advice revealed its ignorance of how many people actually live. How do you self-isolate when you live in cramped or shared accommodation? How do you reduce shopping trips to once a week when you have little or no storage space? And if you do want to go to the park or do an extra shop, you now risk not only infection, but coming into contact with the police, some of whom are zealously taking advantage of their new social control powers.

People in poor areas were already four times more likely to die from avoidable causes, and the link between deprivation and life expectancy has, in some cases, been getting worse. So the potential for Covid-19 to wreak havoc with this disparity seemed obvious, given that it is a disease which adversely affects people with existing health vulnerabilities.

But from the outset, we should also have been talking about race. Ethnic minority people are becoming victims of this frightening illness at an alarming rate. A study of more than 2,000 patients critically ill with the virus in England, Wales and Northern Ireland has found that 35% are black, Asian or other ethnic minority. This is more than double the representation in the wider population.

It’s also a dramatic divergence from the usual patterns of pneumonia, where ethnic minorities are affected at more proportionate rates.

There’s no equivalent data specifically for doctors, nurses and other health and public-sector workers who have become critically ill. But, anecdotally, the picture looks extreme. The first four doctors who lost their lives as a result of treating Covid-19 patients in the UK were all Muslim men of African or Asian heritage. Dr Amged El-Hawrani and Dr Adil El Tayar, the first two to die, were both British Sudanese. Habib Zaidi had Pakistani heritage, and Alfa Sa’adu was born in Nigeria.

Their deaths were followed by that of the black healthcare assistant Thomas Harvey, who died after treating sick patients with only gloves for protection, and Areema Nasreen, a nurse who died at the hospital where she worked.

This may reflect the fact that the NHS has always been heavily dependent on ethnic minority staff, who today make up 40% of its workforce – more then double their proportion in the UK population.

It’s worth remembering that statistic, given how little it’s been reflected in much of the Clap for Carers campaign coverage. You have to go to some lengths – as national newspapers seem to have done when they dedicated their front pages to images of NHS staff – to make the health service look entirely white. These are the moments when we rightly applaud the immense heroism of health workers, but also build narratives about our society, about who serves, about who deserves recognition. For the NHS to at that moment appear staffed only by white people, is profoundly dishonest, a true whitewash.

This week the #CharitySoWhite campaign issued an urgent call for action over the disproportionate impact of the virus on Britain’s minorities. Their report sets out evidence that reduced access to health treatment compared with white people, the impact of school closures, lower income and insecure housing put ethnic minorities at greater risk.

As we have seen time and time again, when government policy claims to be race neutral it ignores the fact that some groups need additional protection or support. Treating everyone the same can embed inequalities. In this case, the impact of austerity and economic meltdown on the charities and voluntary organisations that support local communities needs a targeted intervention.

To see the scary reality of racial inequality taken to extreme proportions during this pandemic, look to the United States. The tragic consequences have reached all parts of the nation. In Michigan, 15% of the population but 40% of the deaths are black. Chicago has a 30% African American population, and a 70% African American death rate. The picture from Louisiana is very similar: a 32% black population, with a 70% death rate.

Racial disparities have a history, and it is no surprise to see a colonial mindset at work in much of the coronavirus response. From some of the early failure to take advice seriously when it came from east Asian countries, to the debate in France about testing new vaccines on Africans (a time-honoured practice in which black lives are valued less). Covid-19 has a way of drawing out the rot in our systems and exposing them.

To say coronavirus is a disease that does not discriminate is wishful thinking. If you are poor, have had a life of income anxiety, poor healthcare, live in inadequate housing and can’t afford healthy food, space and rest, you are vulnerable. Similarly if you are a black or Asian medical professional, no matter how loved by your community and respected in your field.

It will take time, far more data, and tragically more deaths, before we fully understand why.

Culled from The Guardian UK