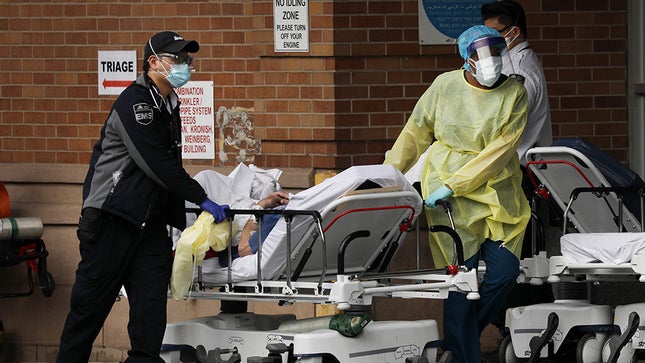 The US has surpassed Italy for the most confirmed deaths from the coronavirus in the world, with 19,424 people known to have died from Covid-19, according to reports.

Italy had previously seen the highest number of confirmed fatalities, with 18,849, according to figures compiled by the Washington Post. Reuters reported the death toll in the US had topped 19,500 on Saturday morning, although it still put Italy slightly ahead.

More than 390,000 people are thought to have recovered from Covid-19, 29,233 of them in the United States. The country with the highest number of recoveries is China, with 77,877, according to Johns Hopkins,

More than 2,000 Americans succumbed to the coronavirus on Friday, the single biggest death toll that any country has yet seen.

The true figures are expected to be higher because of shortages of testing and the difficulty of confirming cause of death for people dying outside hospitals. There are also concerns that some countries may not be reporting cases accurately for political purposes.

Globally, there have been more than 1.6 million confirmed cases, with the death toll surpassing 103,000.

The stay-at-home orders imposed in recent weeks across 42 of the 50 states have taken a huge toll on American commerce, with some economists forecasting job losses of up to 20 million by month’s end, raising questions about how long business closures and travel restrictions can be sustained.

Donald Trump has acknowledged that his decision on when to order a reopening of the economy will be the biggest he will ever take as president.

He had suggested this weekend – Easter Sunday – as a possible time to start lifting restrictions, envisaging “packed churches” on a “beautiful day”. Although that hope has fallen by the wayside, he has repeatedly stressed that he does not want the “cure” to be worse than the disease.