Home Columnist Buhari has an attitude problem – By Abimbola Adelakun 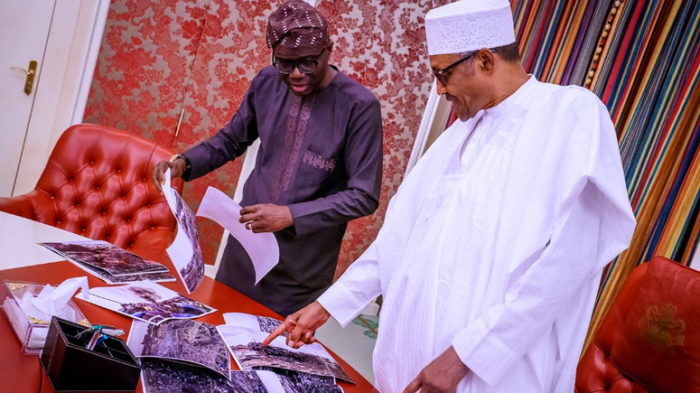 On Monday, while in the Aso Rock Villa, Governor Babajide Sanwo-Olu of Lagos State tweeted photos of himself and the President, Major General Muhammadu Buhari (retd.), perusing still images from the Abule Ado explosion. Vexed by the scene, many Nigerians responded that Buhari should have visited the explosion site and not be served photos from a distance.

They are right, of course. Any disaster, natural or man-made, that – as of the time of writing – claimed 20 Nigerian lives, injured many more and destroyed over 100 buildings, deserves to be treated with gravitas.

On this one though, I will cut Buhari some slack for not rushing down to Abule Ado. It is a norm for a leader to visit the Ground Zero of a disaster, but this time, it would not have served any practical purposes for either the victims or rescue operators. Presidential visits, any day in Nigeria, are a nuisance because they involve a considerable logistical arrangement. Lagos would have had to divert resources needed for the victims to prepare for Buhari’s visit and his physical presence would not have made much difference.

This, however, does not absolve him of the leadership responsibility to show up at crucial moments. Even from a distance, he could have displayed genuine concern. In an age where technological devices have collapsed time and space, he could have made a conference call to the victims. He could have sympathised with their situation and explained that he chose not to travel to Abule Ado because he did not want to interfere with rescue operations. He could have sent select officials from his staff whose visit would have been less intrusive in Lagos’ daily gridlock life.

He could also have used the opportunity to inform everyone that he had taken a briefing from Sanwo-Olu on post-disaster efforts and announce plans to support Lagos. He could have shown care and concern for the victims of the Abule Ado tragedy and yes, he could have done all of that from the precinct of Aso Rock Villa.

In the photographs of Buhari skimming the black and white photographs that Sanwo-Olu was showing him, he was immaculately arrayed in white agbada. His spotless appearance seemingly demonstrated that he would not be touched by the many messes of Nigeria’s situation. He could not even bring himself to display sympathy for the victims of the tragedy, while Sanwo-Olu showed him the stills from the disaster.

Nigeria has been in many difficult situations lately and you get the feeling that the country’s administrators are bored with her recurrent problems. From gas explosions, banditry, fundamentalism, communal violence, to diseases, we cannot seem to catch a break and those invested with power to deal with such situations can no longer summon empathy.

When Buhari had to confront another one of Nigeria’s failed instances, it had to be brought to him in Abuja. Even with that much indulgence, the President interacted from the secure distance of indifference. The complex admixtures of grief, trauma, rubble, blood, pain and agony of the victims had been conveniently flattened into two-dimensional images and printed out on glossy papers for him to see and touch without getting touched by the material reality of the explosion.

We can argue that the rarefied surrounds of Aso Rock Villa insulate Buhari and his staff from the realities of Nigerians’ daily struggles, but that will not be entirely true. What we have is a leader that is mentally removed from any situation that does not serve his interests. Abule Ado is one instance. His belated visit to Benue State in the wake of the 2018 massacres is another. Just like Sanwo-Olu did lately after the explosions, those Benue leaders first visited him in Aso Rock. A 2018 visit to Taraba in the wake of disaster seemed like an afterthought, but of course, the attitude was pretty consistent. His reported comments to those with whom he had come to sympathise in both places were, at best, thoughtless.

That is how Buhari has consistently let down Nigerians. The Lassa fever problem has taken dozens of lives, but has anyone noticed any urgency in his steps as Nigerians died? With the raging force of COVID-19 (aka coronavirus) going all over the world and threatening to turn countries into zombie wastelands, we are stuck with a leader who has not deemed it fit to address the nation.

Without any bias whatsoever to the trained experts working on curtailing the ongoing global pandemic of coronavirus, let us agree that our President has an attitude problem. Since the threat of the contagion was announced sometime in January, serious-minded and responsible leaders around the world have been showing concern for not just their people, but also the fate of society after the pandemic. From Canada to Europe, the United Kingdom, Ghana, South Africa and Singapore, Presidents are standing in front of the cameras and directly addressing their people on the epidemic. They are purposely being seen to be taking drastic measures to curtail the spread of the virus.

They cannot do otherwise. They know that in situations where lives are at stake, one of the first casualties is their leadership. In times like this one, people watch the body language of their leaders for reassurance. When they see their leaders trying to alleviate problems publicly, they imagine they are just as diligent in private as well. They respond with trust in the leader and loyalty to the idea of nationhood. But, of course, that happens only when the leaders consider themselves accountable to the people in the first place. In countries where leaders think that their mere presence in the presidential villa is enough for their distressed countrymen, they can hardly be bothered to address urgent issues of global (or national) concern.

The coronavirus pandemic has been raging across the world for more than two months now, but Buhari has not mustered enough willpower to intimate us on what is ahead and what we need to do. You would think we are immune to both the virus and essential information about it. In situations such as this one, there is a space for listening to directives from experts and there is another one for listening to your leaders. The latter ought to be able to demonstrate that they have learned all that they needed to learn of the pandemic and would be making decisions based on the information. When we do not hear from them, we rightly assume they do not care and people retreat further from the idea of nationhood.

Let’s face it; Nigeria has a poorly developed medical system. The basic infrastructure to facilitate habits that can help to prevent the transmission of coronavirus, such as regular handwashing, does not exist. In these times, we should have the President face the nation and tell us about how to manage our situation. Instead, we are left to figure out our way through confusing developments, such as doctors proceeding on an indefinite strike(!) and up till Tuesday, the news was that Nigeria will keep its skies open to visitors from even plagued countries. How does one process all these?

When public leaders abdicate their duty posts in trying times, such as this one, it should be no surprise that the responsibility they yielded is taken up by charlatans. Some pastors, playing down the magnitude of the pandemic, announced that they decreed the virus to magically “disappear.”

So far, Nigeria’s fortress against coronavirus has managed to hold steady but for how long? Just like Ebola, one cannot shake off the feeling that the diligence so far exhibited is contingent and, therefore, self-serving. They are not making efforts that will be practised into a general health culture; they are just being mindful that the contagion is no respecter of persons. The coronavirus, for instance, has penetrated everywhere from the corridors of power to the lush penthouses of the rich and powerful. When they are at risk, they manage contagions. When they are not likely to be victims of a gas explosion or even Lassa fever, they watch the victim count pile.