Home Columnist Ganduje is a monster, but Sanusi is not a victim – By... 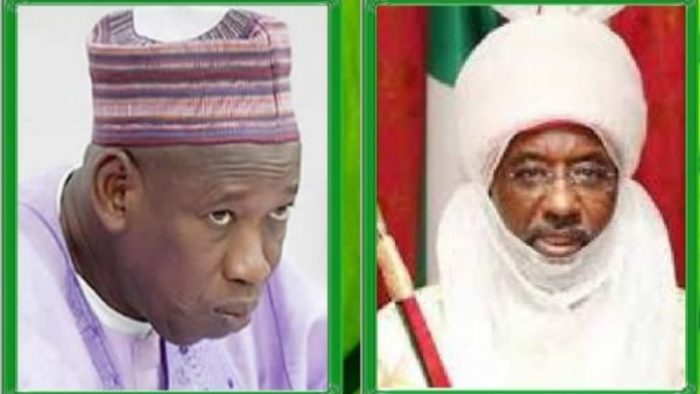 Governor Abdullahi “Gandollar” Ganduje is no doubt a contemptibly philistine monster of avarice and debauchery who dethroned Sanusi Lamido Sanusi as Emir of Kano because he couldn’t stomach the former emir’s disapproval of the electoral fraud that brought him to power.

There is also no doubt that Sanusi’s unrelenting public censures of the rotten, if time-honored, cultural quiddities of the Muslim North discomfited many people who are invested in the status quo, which became one of the convenient bases for his ouster.

But Sanusi isn’t nearly the victim he has been cracked up to be by his admirers and defenders. First, he rode to the Kano emirship in 2014 on the crest of a wave of emotions stirred by partisan politics and came down from it the same way.

Even though he wasn’t initially on the shortlist of Kano’s kingmakers, APC’s Governor Rabiu Kwankwaso (who is now in PDP) made Sanusi emir in 2014 to spite PDP’s President Goodluck Jonathan and shield Sanusi from the consequences of his unmasking of multi-billion-dollar corruption at the NNPC. Apart from his unceremonious removal as CBN governor for his whistle blowing, he was going to face other untoward retributions from the Jonathan administration, but his appointment as emir put paid to it.

In other words, Sanusi’s emirship was molded in the crucible of partisan politics and was dissolved in it.

Nonetheless, Sanusi, given his intellectual sophistication and pretenses to being an advocate of egalitarianism, had no business being an emir. Monarchy is way past its sell-by date. It’s an anachronistic, vestigial remnant of a primitive past that invests authority on people by mere accident of heredity. Any authority that is inherited and not earned, in my opinion, is beneath contempt.

Emirship isn’t only a primeval anomaly in a modern world, it is, in fact, un-Islamic. In Islam, leadership is derived from knowledge and the consensus of consultative assemblies of communities called the Shura, not from heredity.

Monarchies in the Muslim North, which have constituted themselves into parasitic, decadent drains on the society but which pretend to be Islamic, are grotesque perversions of the religion they purport to represent. Anyone, not least one who makes pious noises about equality, that is denied the unfair privileges of monarchy is no victim.

Most importantly, though, Sanusi embodies a jarring disconnect between high-minded ideals and lived reality. He rails against child marriage in public but married a teenager upon becoming an emir. When the late Pius Adesanmi called him out, he told him to “grow a brain.”He suddenly became the patron saint of conservative Muslim cultural values.

He expended considerable intellectual energies critiquing polygamy among poor Muslim men, but he is married to four wives. His defense, of course, would be that he can afford it, and poor Muslim men can’t. Fair enough. But transaction-oriented reformists lead by example.

Fidel Castro, for example, stopped smokingwhen he campaigned against it. It would be nice to say to poor, polygamous Muslim men, “Why are you, a poor man, married to four wives when Sanusi, a wealthy man and an emir, is married to just one wife?”

That would have had a much higher impact than his preachments. In spite of their moral failings, Buhari, Abba Kyari, and Mamman Daura would be much more effective campaigners against disabling polygamy by poor Muslim men than Sanusi can ever be because they are monogamists even when they can afford to marry four wives.

This is a legitimate critique since Sanusi has a choice to not call out poor Muslim men who marry more wives than they can afford since polygamy is animated by libidinal greed, which is insensitive to financial means.

Sanusi habitually fulminates against the enormous and inexorably escalating poverty in the north, but even though he is an immensely affluent person, he has not instituted any systematic mechanism to tackle the scourge of poverty in the region in his own little way.

Instead, he spends hundreds of billions of naira to decorate the emir’s palace, buy exotic horses, and luxuriate in opulent sartorial regality.

And, although, he exposed humongous corruption during Goodluck Jonathan’s administration and dollar racketeering during Buhari’s regime, he is himself an indefensibly corrupt and profligate person. In two well-researched investigative pieces in 2017, Daily Nigeria’s Jaafar Jaafar chronicled Sanusi’s mindboggling corruption as emir of Kano, which apparently didn’t abate until he was dethroned.

Sanusi was ostensibly a Marxist when he studied economics at ABUwhich explains why he exhibits flashes of radicalism in his public oratory, but he is, in reality, an out-of-touch, unfeeling, feudal, neoliberal elitist who is contemptuous, and insensitive to the suffering, of poor people.

He supported Jonathan’s petrol price hike in 2012 and even wondered why poor people were protesting since they had no cars, and generators, according to him, were powered by diesel, not petrol!When his attention was brought to the fact that only “subsidized” and privileged “big men” like him use diesel-powered generators, he backed down and apologized. But I found it remarkably telling that until 2012 Sanusi had no clue that the majority of Nigerians used petrol-powered generators to get electricity.

In a September 1, 2012 column titled, “Sanusi Lamido Sanusi’s Unwanted 5000 Naira Notes,” I noted that Sanusi was “one of the most insensitive, out-of-touch bureaucrats to ever walk Nigeria’s corridors of power.”

Again, in my December 10, 2016 article titled, “Dangerous Fine Print in Emir Sanusi’s Prescription for Buhari,” I wrote: “If you are a poor or economically insecure middle-class person who is writhing in pain amid this economic downturn, don’t be deceived into thinking that Emir Sanusi is on your side. He is not. His disagreements with Buhari have nothing to do with you or your plight. If he has his way, you would be dead by now because the IMF/World Bank neoliberal theology he evangelizes has no care for poor, vulnerable people.”

On April 6, 2017, I wrote a Facebook status update that anticipated Sanusi’s dethronement and predicted that he might be president after his dethronement. I wrote:

“Did you pick up on the cryptic but devastating critique of Kano State Governor Ganduje’s government in Emir Sanusi’s wildly trending Kaduna speech? That’s gotta hurt. Remember that the power to appoint and dethrone traditional rulers rests exclusively with state governors. Now, pissing off the federal government AND the state government AND an entire region’s conservative cultural elites with bitter, uncomfortable truth-telling is a lethally combustible mix.

“I make no pretenses to possessing oracular powers (because I don’t), but I predict that, like his grandfather, Emir Sanusi II will be deposed. But, unlike his grandfather, he may end up becoming Nigeria’s president after his dethronement. Kano’s loss would then be Nigeria’s gain which, in a strangely circuitous way, would also be Kano’s gain since Kano is part of Nigeria.

“Sanusi shouldn’t be Kano’s emir; he should be Nigeria’s president. I have strong disagreements with the neoliberal orthodoxy he subscribes to, but it would be nice to have a truly informed and educated man as president for once.”

Now, do I still want Sanusi to be Nigeria’s president? I am not too sure anymore. First, I doubt that the forces that got him out of the throne would allow him to become president, but should he decide to run for president in 2023, people who will vote for him should realize that he is neither a saint nor a victim.