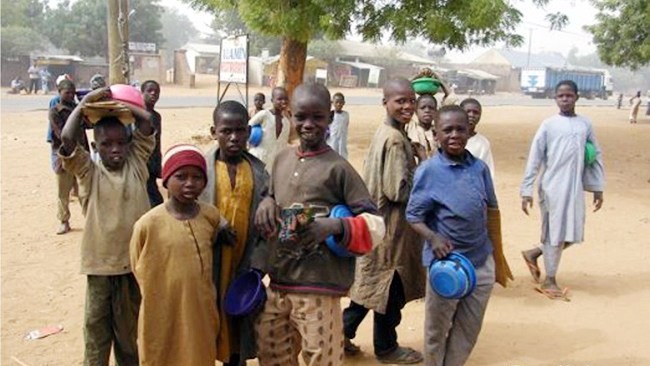 Old habits, they say, die hard. And those habits with taproots deep in culture and ignorance, like the Almajiri system of imparting the Quranic education to the youths, die harder, if at all.

As we can see very clearly, up till today the issue of the Almajiri system of learning has not disappeared.  Its controversy may sometimes seem dormant but once in a while it flares up and suddenly reduces in intensity. It has remained a burning issue because those who can make it go by fiat, if necessary, or by well-thought out reform, are themselves slaves to culture and sentiments and the unfounded fear of offending their faith.

Left untouched over the decades, the population of children of the Almajiri system has exploded unto the streets where their stock in trade is begging.

Apparently, this development had gotten under the skin of National Security Adviser, retired Major General Babagana Monguno and it got him thinking.  Last year, he exhibited some flashes of inspiration and uncommon courage when he hinted that the Federal Government was considering the proscription of  Almajiri – the age long practice of imparting Qu’ranic and Islamic knowledge to Muslim children.

He hinged his argument for proscription on security. It was very important, he had said, to “proscribe certain groups running around under the guise of getting some kind of education that is not really formal and then begin to cause a lot of problem for the society.” Having stirred the hornet’s nest by linking the Almajiri system with increased insecurity in the country, it seemed that the NSA had drawn the Buhari administration into the muddy waters of controversy. Without intending to, it had also incurred the ire of the conservative Islamic authorities who normally do not take kindly to any change.

So what to do? The presidency, not wishing to rock the boat, quickly doused the fire through its spokesman, Garuba Shehu, who, though he agreed with the NSA, assured the Muslim community that the proposed change was not immediate. He did not give any timeline. And that effectively, in my view, poured cold water on the enthusiasm of the NSA. So no proscription, no change. Let the sleeping dog alone.

But this did not deter prominent figures like the Emir of Kano His Royal Highness Muhammadu Sanusi II who have been untiring in their effort to get the children under the Almajiri system from the streets to the classrooms.

At any given opportunity, the Emir never shied away from speaking the truth as he knows it. And, truly, he knows a lot, through proper learning and ample experience, to know that the Almajiri system of acquiring Islamic education has not been sanctioned by the Holy Qu’ran and the Hadith. What is worse is the demeaning and dehumanizing street begging that is now seen as a necessary ritual associated with the struggle to acquire knowledge.  In fact, he and other modern scholars have been emphatic about begging being un-Islamic. Not only does begging demean and dehumanize, it also promotes laziness and indolence because it generously and gratuitously breeds lack of initiative.

It is interesting to note that at least on this issue, the Emir and his governor, Abdullahi Ganduje have come to the same page in their collective determination to chart a progressive course for Kano Emirate in particular and Kano State as a whole. The two illustrious personalities may have had reasons to disagree on principle but the issue of the Almajiri system, that has thrown unto the street at least two million Kano children as beggars, is grave enough to bring the two antagonists into the same progressive camp. The two, for the love of Kano and its teeming population, are now singing the same song and dancing the same dance  –  the song and the dance of progress.

Last week the governor took the Northern establishment by surprise when he announced by executive fiat that street begging by children known as Almajiri pupils had been banned. Henceforth, said the announcement, the state government would integrate the Almajiri system into the formal education system that provides for a free and compulsory primary and secondary school in the state. The government warned those who run the Almajiri system in the state to comply or pack up and go. Not only will any defiant child be arrested, his parents will also face the wrath of the law.

For far too long, the North had been at pains on how to resolve the Almajiri conundrum without falling foul of the established conservative orthodoxy on which Northern feudal system exists and flourishes. But the courage to grab the bull by the horn and do the needful always evaporated in the face of political exigencies. So the antagonism between conservative forces and the forces of progress would occasionally glimmer and flare, as it were, but it would suddenly subside again and again. But now from Kano, once famous as the seat of the progressive Northern politics, has come today as the ultimate silver bullet  in the grim determination to call the bluff of negativism without sacrificing the needed Qu’ranic and Islamic education that helps to nurture faith and make for better adherents of Islam.

To allay the fears of those who think that formal education system does not allow for serious learning of the Qu’ran and Islamic education, the government, under the integrated system, has placed strong emphasis on the teaching of the Qu’ran along with the learning of English and Arithmetic up to secondary school level.

But can’t those doubters see what good the combined educational system has done for the few Northern elite –  the governor himself  being a good example as well as the highly cerebral Emir, a sound economist and a universally acclaimed intellectual giant of the two worlds – the East and the West.

So I ask, just by the way:  Why will some irresponsible parents allow their own children to be used as drawers of water and the hewers of wood in this age? While will they like to subjugate and subordinate their own children, in a manner of slave labour, to the children of the elite who have profited from the two worlds of learning?

But to  clear all their doubts and ensure sincere and full implementation of this programme of integrated learning,  Governor Ganduje  has set up a technical committee comprising learned scholars of the East and the West who are also experienced administrators to review the curriculum of the Almajiri system and ultimately to integrate it into the mainstream of the formal education system.

And to ensure an all round success, Governor Ganduje is not limiting his efforts to Kano State as he is calling other Northern governors to embrace this crusade. But as they do so, they should not be unmindful of the harm bad politics has done to good intentions in the recent past.

I recall that the administration of President Goodluck Jonathan, though derided as clueless and riddled with corruption, still had the grace and clear-sightedness to build 80 modern schools for the Almajiri system in the North with the intention to get them integrated into the mainstream educational system for their own good and the good of the North.

These schools, complete with desks and other implements were to be handed over to the Northern governors as far back as September 2013. The pupils, in modern and conducive learning environment, were also to be kitted with suitable school uniforms and given free meals during school hours to encourage them to stay off the streets. But thanks to our brand of politics, those schools have been allowed to go to waste.

Apparently, it was politically sound, proper and correct to throw away the baby with the bathwater.