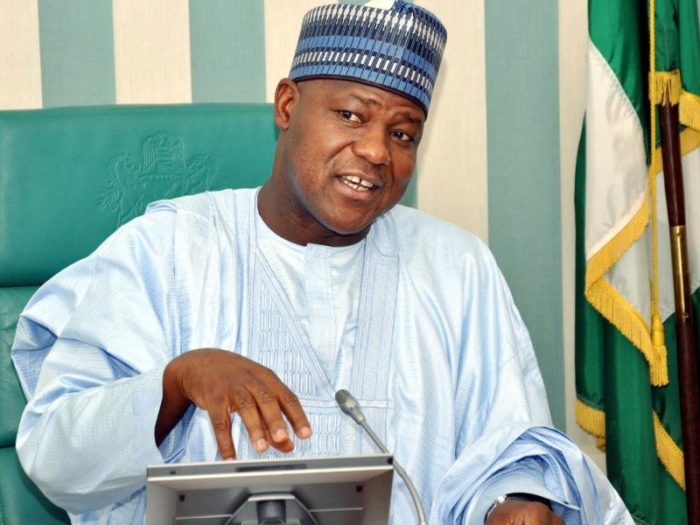 Permit me to state the obvious, for I must not fail to report, and proudly too, that former speaker, Hon. Yakubu Dogara, still speaks well and eloquently too.

As someone who once made a good living from being speaker in the 8thNational Assembly, Speaker Dogara spoke recently and, truth be told, he spoke to the heart of the matter, almost as nobody else has done in recent time.

Not to make the preamble long, Speaker Dogara was last week chairman (equivalent of speaker) at northern security meeting in Kaduna, “an all important event which aims to stem the tide of the unbridled violence being unleashed on Northern Nigeria.”

And without calling a spade another name, shovel, hoe and what have you, he let it be known painfully and bluntly that “the North is now the epicenter and theatre of violence.” His characterization of his birth region in such unflattering fashion is reminiscent of a similar one by former Sultan Ibrahim Dasuki, of blessed memory, when he presided over a similar peace hunting meeting of Northern leaders.

With evident pain and embarrassment, His Eminence the Sultan described the North of his time the “bedrock of disturbances,” referring to the persistent religious violence that had engulfed the region.  At various meetings, he enjoined emirs and other leaders in the North to prevail on their subjects and followers to give peace a chance.

But sensing  the reluctance of the people to give  peace  a chance and the proclivity of the riotous youths to set ablaze churches and mosques to prove their unalloyed loyalty and commitment to their respective faiths, I was, myself,  provoked in one of my columns into describing the once peaceful region as  the wild, wild North,  having successfully upstaged the Western region that was thought to have the  monopoly for political violence and for which  it earned  the sobriquet of the Wild, Wild West. Today the West, as a region, is at peace with itself. And from close quarters, I can report how jealously it is guarding its own security with some battalions of the Amotekun warriors.

Dogara was on familiar territory last week when he waxed lyrical in his opening remarks, except that the subject matter this time – the  egregious insecurity in the North that has seen the region turning the gun against itself –  was more sorrowful than his words could  adequately  encompass.

Religious riots of yore, including the Maitasine madness, have all become like child’s play in comparison with what the North is celebrating today. Today, to quote Dogara, “the North is now the epicenter and theatre of violence. From Boko Haram ISWAP led by Albarnawi, Boko Haram led by Shekau and Ansaru insurgency, to farmers/herders conflict, banditry, kidnappings, ethno-religious conflicts, cattle rustling, we are now confronted with a crisis that is unparalleled in our history. The death spiral appears unstoppable.”

And that is the crux of the matter. How to stop the death spiral in the North which, like the coronavirus of the Chinese, is spiraling out of control.  Solving a problem requires that you must start with the cause. This logic is so elementary that serious minded researchers tend to cheerfully ignore. Every so often, therefore, there is the tendency to mistake the symptoms for the cause.

Were this not to be so, how come the Northern leaders from year to year have found it difficult to get to the root cause of the problem? One obvious cause is that the North tends to easily drift into the sleep mode, turning a blind eye to any problem that appears to defy easy solution after the first attempt. Or to live peacefully thereafter in denial. That way, problems are left to fester and grow into something resembling an epidemic.

Religious riots, when they were in vogue, always started with some little misunderstanding between one sect and another until they became full blown crisis. We now seem to have forgotten the old cliché that a stitch in time saves nine. But this has remained a durable and efficacious conflict resolution mechanism.

At the crucial security meeting under review, Speaker Dogara tasked the egg heads who had been grouped into various committees to come up with solutions that would stand the test of time. But he gave them more to chew from his own illustrious perspectives. For example, in the search for solutions, he stressed the need to search far and wide, not minding the fact that in organizing an event of such magnitude, “our best intentions could easily be misinterpreted.”

Part of the reason, in my view, is that we have allowed problems to fester  for long before we begin to apply panic measures  – the fear of being misunderstood, wrong motives being ascribed to good ideas and failure to appreciate  constructive criticism, and  the messenger being mercilessly attacked with the propensity to leave the message severely alone.

But there is no running away from finding solutions to the problems ravaging the North. We must push back the region from the dystopian state in which it has fallen over decades, “a society that is driven at its core by the death instinct, the instinct to annihilate and destroy rather than nurture and create.”( Dogara)

In locating the problem of the North, there is always a tendency, as I have said before, to mistake the symptoms for the cause.  I had argued, even in the face of circumstantial evidence to the contrary, that the root cause of the malevolent disease rampaging the once monolithic, peaceful North may not be found in the so-called attempt to Islamize the country starting with the North. I have always suspected that the bogey of Islamization has always been the handiwork of those who want to hold down the economic development of the region. And such people have their allies in a pool of the gullible, the wretched of the earth who help to carry the can and matches to burn churches and sometimes kill Christians to prove the point.

They have since graduated from carrying box of matches and petty cudgels. They are now armed with the most sophisticated weapons and they had metamorphosed into Boko Haram, ISWAP and a host of kidnappers, vicious herdsmen, bandits, rustlers who are ever ready to kill and maim, and kidnap for ransom, making no distinction between friends and foes, Christians and Muslims.

Is it any wonder that “our economic debris” as Dogara has painted it, “have become too conspicuous to be ignored…. as we are now trapped in a prison of mirrors, where revealed lies are answered with new lies… and our slow motion walk into apocalypse is assured.” Any wonder?

When a friend sent me a copy of the Dogora testament on the woes of the North, my reaction was simple.  I thought the speech was great. I thought he spoke the truth.  But as many of us have lamented over decades, the pontifications have now become akin to moving in circles. Same old problems, same old sermons and at the end of the day, a grand retreat into our different comfort zones. I concluded that it was the truth that hurts but was worth hearkening to for the sake of the region and the country as a whole. I did not forget to point out that over decades, bad leadership across board, coupled with uneducated reading and misinterpretation of our scriptures have remained the bane of the North.

Dogara must be given the chance to have the last word on this matter. The real problem of the North, he said, is that “we have failed to provide leadership and organize   a society that works for all. A peaceful and orderly Northern Nigerian then was more engaged in the pursuit of justice rather than the pursuit of order.   We failed to heed the timeless warning that a society that is more devoted to order than justice will never be an orderly or peaceful society.”

As a witness, he reached out to St Augustine who asked: “In the absence of justice, what is sovereignty but organized robbery.”