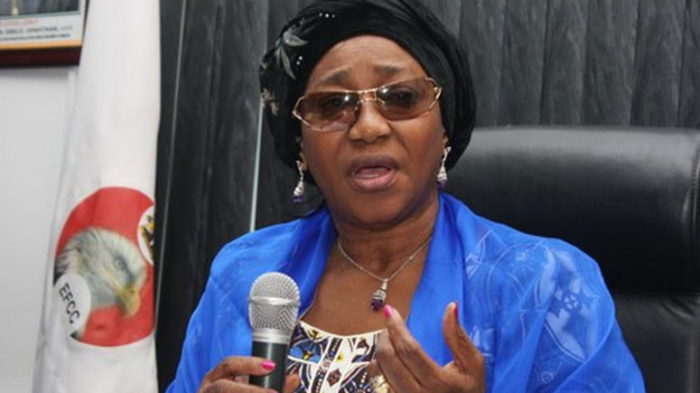 A former Chairman of the Economic and Financial Crimes Commission, Farida Waziri, has given a number of reasons she was sacked from her old job by Nigeria’s ex-President, Goodluck Jonathan.

Waziri, who chronicled her engagement in governance in her new book: “Farida Waziri, One Step Ahead”, said one of the reasons she was sacked was because she refused to back down on some oil racketeers.

Waziri was appointed by Umaru Musa Yar’Adua and was sacked from office on November 23, 2011.

She said she got to know about her sack from the former Head of Media and Publicity in the agency, Femi Babafemi.

“I switched on the television and waited for the news hour. It came on first on Channels, and shortly after, on NTA and AIT. My husband was sleeping upstairs. I went into his room to wake him.

“I have been sacked.” He grumbled about someone disturbing his sleep. “It’s too early for jokes this morning.

“It is not a joke. I have been sacked. It is in the news. Come and see.” We went downstairs together. He watched the TV in silence. “It’s okay” was all he said.

“The date was November 23, 2011.  It didn’t take me by surprise. There had been rumblings and maneuverings in the recent past to guess such an end was in the offing. The last straw that broke the camel’s back was an EFCC operation in Lagos,” she said.

Waziri said the agency, under her leadership, had got a tip-off about some oil racketeers who were in Nigeria for dubious dealings. She said she organised a stink and moved in on the suspect but unable to arrest them, the accountant of the company was arrested. After effecting arrest, an order to release the suspects came from the Presidency.

“The message was an order:  ”Release the man immediately!” My calm explanation to the voice from the villa was “The person you are calling for is not arrested; it is his accountant we invited here.” “Okay, let the accountant go,” she said.

She said the caller from Abuja also ordered her to release the computer seized from the accountant.

The former EFCC boss said that was the beginning of her sack.

So, when she got the news of her sack in the media, she said she simply went into her office and picked up her belongings.

“I didn’t call the President; neither did he call me.  Nobody called me. I handed over to Ibrahim Lamorde, my deputy. The handwriting was on the wall a long time ago. My friend, the Minister for Information, Prof Dora Akunyili, was the first person to hint me about the coming bombshell. Months earlier, she warned me of a plan to oust me from office,” she said.