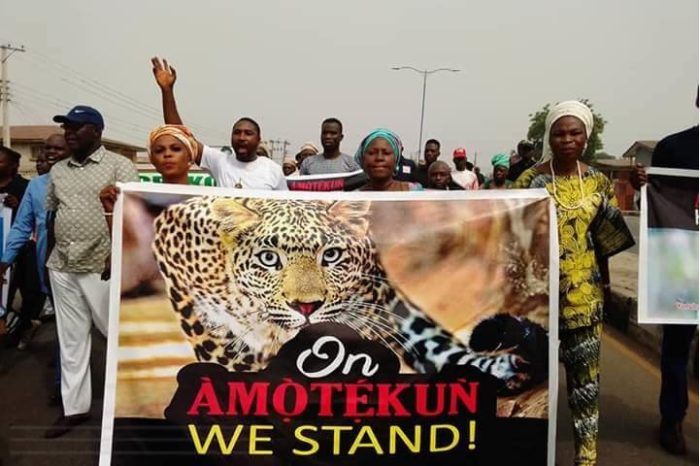 The leopard is a dangerous animal and moral exemplar; an embodiment of poise, predatory instinct and fastidious eating habits hence its suitability as a metaphor for the southwest’s security initiative.

In the wake of its establishment, however, Attorney General of the Federation and Minister of Justice, Abubakar Malami, has described Amotekun as “illegal,” drawing flak from several quarters.

Prof. Itse Sagay (SAN), Chairman of the Presidential Advisory Committee Against Corruption (PACAC) argued in a recent interview, that Amotekun doesn’t run foul of the law, stating that the governors have no duty whatsoever to consult Malami.

He said: “I think the governors should just ignore him and carry on with what they are doing…That arrogant authority that he can dictate to states is very insulting.”

Operation Amotekun, argues pundits, agrees with Section 14(2)(b) of Nigeria’s Constitution: “The security and welfare of the people shall be the primary purpose of government,” which, in a federation, includes the federal, state, and local governments.

Subsequently pro-Amotekun rallies have held in Akure, Osogbo, Ado-Ekiti, Abeokuta, and Ibadan. In Lagos, the planned rally was, interestingly, foiled by the police.

At the backdrop of the ensuing drama, some have argued that Operation Amotekun resonates the frantic skirmish between southwest governors and their northern peers, in a pageantry of wile and maneuver en route the 2023 elections.

However, to totally condemn Amotekun is to amplify the rabid cries of biased critics of the initiative. To its apologists, if the Civilian Joint Task Force (CJTF) and Hisbah, among others, are acceptable as worthy security measures, up-north, then Operation Amotekun must be acceptable to all as the southwest’s inalienable right to security and self-determination as backed by the constitution, and foremost legal luminaries.

For instance, Chief Afe Babalola (SAN), advised the southwest governors to proceed with the implementation of Amotekun and leave the Federal Government to challenge the matter in court.

As most south-westerners read of Boko Haram and armed bandits’ assault on the northeast, hovering at the edge of a forbidden locus of experience, so do misguided critics of Amotekun up-north perceive news of homicidal herdsmen tormenting the southwest.

Nonetheless, Amotekun is a welcome initiative in an era when armed bandits, herdsmen, and kidnappers subject fringe communities of the southwest to a merciless ravage akin to the plundering of a nut grove thus rendering the fertile lands mutilated bowers.

According to urban legend, on Amotekun’s watch, terrorist herdsmen, armed bandits and kidnappers will shy off the boundaries of the southwest. But the regional security initiative faces opposition from both external and internal forces, according to Ondo State Governor and Chairman, Southwest Governors’ Forum (SGF), Rotimi Akeredolu. Akeredolu berated internal enemies for sabotaging Amotekun, describing them as “collaborators whose parochial political pursuits have beclouded their sense of tomorrow.”

But that is simply one way to look at it. On the flipside, Amotekun is a pseudo-gesture affected to excite sentimental feelings of safety and racial pride. It’s a wildly selfish ploy, plotted to make the citizenry confuse how they are made to feel about the governors’ inefficiencies and political maneuver, with the bitter reality of pervasive insecurity across the southwest.

Governors who can muster no justifiable account of security votes allocated to them want us to believe that they care about our safety, the protection of our civil rights, and democracy. Ultimately, they seek to funnel billions of tax naira to fund Amotekun, and so doing, replenish their political war-chests, acquire choice property and stash public fund in their overseas accounts, illegitimately.

There is no gainsaying auxiliary forces, like Amotekun, in Nigeria, Somalia, Iraq and other contemporary conflicts have played key roles in winning back territory from terrorists and brigands. Such forces are often convenient, short-term solutions for governments facing insurgencies that outmatch regular security forces.

Amotekun is expected to operate as a cheap force multiplier; as its members presumably have local knowledge and language skills that makes them more effective fighters and intelligence gatherers. More importantly, the group offers southwest governors more plausible immunity and denial of violations of international humanitarian and human rights law in the context of ‘keeping the peace’ and counter-insurgency campaigns.

Through the hoopla and feral applause, very few people, perhaps, have paused to mull the likely ramifications of Amotekun. How long before the militia turns back to haunt the people whose interests it was created to protect? How long before it sinks its fangs and claws into their hide?

It’s a given that on Amotekun’s watch, human rights conditions would worsen across the southwest. Violence and torture, state-sanctioned murder, unjustifiable citizen arrests and disappearances would increase as each state governor nurtures infinitely ‘loyal’ units of the group.

The group’s ultimate loyalty is to the governors, whose chief intent is to deploy Amotekun to bully political opposition, steal ballot boxes and rig the 2023 elections.

Arrowheads of the Amotekun movement, despite their platitudinous chant, clandestinely seek to deploy the outfit in taming detractors and ‘political godfathers’ whose perceived influence may limit their chances and interests at the 2023 elections.

The downside of this reality is that such ‘godfathers’ equally have the capacity to woo and purchase the loyalty of Amotekun’s hierarchies. In the long-run, Amotekun will implode, with members pitching tents and selling allegiance to the highest bidder.

How would Amotekun’s membership be drawn? What are the yardsticks for vetting recruitment? If the police and other state law enforcement agencies, despite their access to structured academies and international training, continue to churn out mostly inefficient, trigger-happy cops, what’s the guarantee that they would help mould Amotekun into a sterling militia as the governors’ claim?

Crisis is bound to erupt; the group will implode by its inability to achieve a synergy between its young, violent membership and ageing conservative divide.

The people may need to gird their loins for more outbreaks of ritual murders by auxiliary militia members seeking spiritual powers in bid to assert their individual might and repute, and thus enjoy patronage by governors seeking ‘muscles’ for “top-secret political missions.”

Moreover, given their roles in fighting armed bandits, kidnappers and terrorist herdsmen, Amotekun members will often be seen as heroes by segments of the citizenry.

This would raise the political costs of trying to bring their members to justice when they run foul of the law.