Home Columnist This chalice filled with blood – By Olatunji Ololade 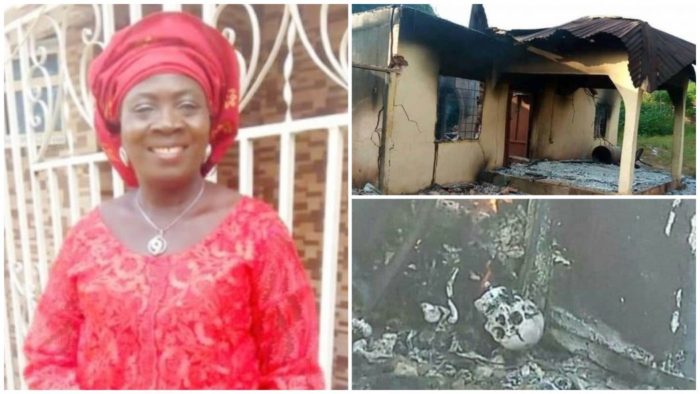 The year 2019 presented as the umpteenth scene of Nigeria’s grotesque political drama. Its first quarter unfurled cloaked in blood and sadism of clashing tribal characters. Herdsmen plundered subsistence farms up-north, crossing the middle-belt into Nigeria’s south-lands, to rob and murder impoverished families tilling the soil to eke a meal.

They maimed rural fathers, murdered and raped mothers and daughters in righteous rage a la Boko Haram. The latter, characteristically, continued its campaign of violence and death in the north-east. Despite the formidable exploits of the armed forces, the massacre persisted in real time. It persists even as you read.

Thus at the start of the year, the dominance of despair seemed so complete and insurmountable, as usual. Government habitually played dumb, issuing excuses and uninformed ripostes to critics and opposition’s wanton diatribes. As the carnage persisted, the government was unruffled and the governed stayed inert.

The government knows the governed (electorate) through sadistic plowing. Nailing the latter down by a leash of cash and manipulative sentiments, elected representatives, like a bloodthirsty cult, caught their shrieks in a metaphoric calabash. The vessel was chillingly archetypal, reflective of indigenous cults’ demonic bloodfest.

The government’s gourd vine connotes its egoistic self-preservation: career politicians desperately sought re-election or a change of public office hence the insolence of out-gone governors who went on to become senators, even in states where the electorate died by their ineptness and brazen pillage.

The ruling class’ metaphoric calabashes are their exaggerated pride and incestuous self-idolatry. A poisoned chalice. Like the Biblical whore of Babylon, they held their gourds scummy with lusts and amorality; one governor, following eight years of his maladministration and impoverishment of the state and electorate, sought to install his son-in-law as governor to continue his pauperisation legacy. Another with a curious kink for risible caps, fought to install his “chosen wizkid” as his successor in a badly governed state, where the electorate struggled to escape his asphyxiating tenure.

The insolence persists across the country and political platforms; politicians pant to the venom of serpents interred in their possessed spirits. We have seen how such individuals and their bungling parties sadistically mauled sound to sight; sighs and cries to streaming blood.

While it has become hackneyed that the people must learn to become their own saviours, I hereby reiterate that it is never too late for the Nigerian electorate to divest the country’s battered chests and earth of murderous forms. Lest we end up as tissues and blood in their gourds.

Yet the monstrous ruling class reflect our decadence back to us. They actuate rather than constrain our perversions. Boorstin would call it the mirror effect. The ruling class’ administrative hearse becomes the realistic carriage of our death-tending impulses. On their watch, insecurity persists: terrorism, kidnap for ransom and armed robbery flourishes.

Fraud, embezzlement of public funds persist in this government as its predecessors, though in tidier proportions. Public officers, afflicted with inferiority complex, god-complex, and inordinate greed, among other esteem issues, subject the citizenry to interminable miseries occasioned by deadly, cratered highways, declining health and education institutions, a depressed economy, gory, methodical massacre of the citizenry by bloodthirsty terrorists, herdsmen, kidnappers and political thugs.

Notwithstanding their tormentors’ failings, the electorate returned them to power in  2019.  Enter 2020. The gruesomeness persists in real time. In 35 months, voters will once again, fall victim to an ageless ruse repeatedly weaponised by the ruling class. Every politician seeking public office understands that the political arena is a theatre, where the most essential skill required is artifice.

But that is simply one way to look at it. The political arena equally unfurls like a dangerous red light district, an expansive brothel, where electorate bodies are the stringed instruments hysterically plucked by politician-patrons.

The governed, or electorate if you like, are sometimes mauled like rape victims in a frenzy, as reflective in the imagery of the country’s badly governed states.

In this decadent theatre, politicians emerge as master harpists, making dark melody by the electorate’s torment, in fulfillment of their guilty pleasures. Through their anguish, the electorate becomes Nigeria’s faceless natives, bleeding saps for whom the ruling class’ much sought utopia manifests as infernal dystopia.

The discerning see through the artifice. They know the pleading candidate’s smile masks a scowl. They know that incumbent public officers and the opposition seeking to usurp power from them are birds of a feather, criminals on flip-sides of the divide, deploying the media among other tools of mass propaganda to create a sense of faux intimacy with the citizenry.

The incumbent ruling class sustains its vice grip on power and public office by weaponising tokenism and politically compromised media.

With such instruments under their control, they know they do not need to be competent, sincere or honest to earn trust, win votes and elections, they only need to appear to have these qualities.

More importantly, they know they must be adept at creating and establishing a false narrative of their sainthood and the opposition’s villainy. The consistency and emotionality of the story are paramount. And the story must be entertaining and wildly infused with absurd drama.

Consider for instance, the sad case of Salome Abuh; the former councillor and Women Leader of the Peoples Democratic Party (PDP) was set ablaze on November 18 in her home at Ochadamu, by hoodlums.

The incident occurred in the wake of the November 16, 2019 governorship election in the state. Suspected thugs who invaded Mrs. Abuh’s home in the afternoon reportedly locked all exits in the house, doused it with petrol and set it on fire. Eyewitness accounts hold that they prevented the deceased’s neighbours from coming to her rescue as they shot sporadically to scare them away and kept watch until the building was razed down. Mrs. Abuh reportedly attempted to escape through a window but was prevented by the metal burglary proof and bullets raining in her direction.

Asides random assassinations of the Abuhs of our world, scandalous affairs of paedophile, bribe-taking, machete-wielding governors, and a threesome-loving lawmaker caught pants-down, are inconsequential in considerations of their suitability for re-election. Rather than make them pariahs, it earned them empathy and votes.

As medieval royalty deployed court drama and conspiracies to divert the attention of their subjects from daily miseries, so do the ruling class and opposition divert electorate attention from the real issues. Thus their obsession about 2023 elections even as they bungle this dispensation.

The real issues aren’t what they project to us via propaganda and media reports. The real narratives are in everything they would rather not tell us. What is the nature of government expenditure on Millennium Development Goals (MDGs), and the result of such spending? What is the real impact of the anti-corruption fight? Of government spending, how much is truly committed to education and health financing? Does the government still pay itself outrageous salaries?

What has the incumbent government done differently from its predecessors beyond the bounds of its statutory responsibilities? Do Nigeria’s two most prominent parties deserve the electorate’s trust? Must the same ruling class be retained in power? Why?

These are some of the real issues. Civil societies, the media and other segments of the electorate must align in the establishment and support of a platform and candidates truly deserving of their votes. It’s about time.