Home Columnist Fashola and the death of an idol 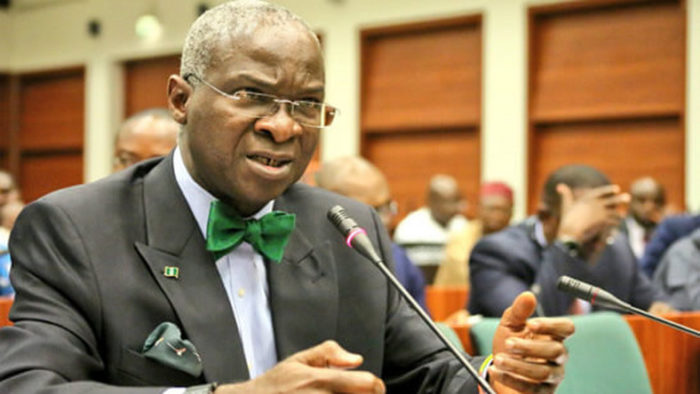 When the Minister of Works and Housing, Babatunde Fashola, said last week Wednesday that Nigerian roads were not as bad as they are often portrayed, he got a lot of flak from longsuffering Nigerians who scored his declaration as insensitivity. To redress the blowback, his defenders circulated the video of his meeting with state house correspondents where he made the statement so we could get a fuller context of what transpired. Despite this strident effort to make it seem he was quoted out of context, one thing remained unchanged: Fashola wants the media to engineer reality for their administration.

His point was that a narration of Nigeria that projects the good along with the unpleasant would give people more hope about their country, but he might be exaggerating the power of the media. Nobody looks to the media to be informed of their lived reality. What they require of the media is an interpretation of those experiences by putting issues in a broader context.

Fashola himself provides a useful example of why Nigerians are cynical about their country. Whether you ask him about the state of roads or power generation, his answers are always a litany of excuses. If he is not blaming the Peoples Democratic Party for what they failed to achieve, he rues the weather for stalling road construction projects. He recites these alibis with such practised efficiency that one cannot but despair that things will ever function as they should. If people cannot find hope in their country, blame administrators like Fashola who give reasons in place of results.

Anyway, what piqued my interest in the Fashola affair was the angry public response to him. How did he go from being everyone’s darling to being booed and thumbed down? Once upon a time, he was loved from Lagos to Lapai. How did he fritter that goodwill?

In 2007, when he became the Lagos State governor, he grew so beloved quickly that self-appointed hornsmen declared him the long-awaited messiah. How could anyone not have loved the young, brilliant, and charismatic governor called Fashola? He was suave, cosmopolitan and energetic, projecting traits that embodied the aspirational ideal of Lagos. When people love a public figure, they also make an idol out of them by weaving myths around their personality. People would talk about how impressed they were to see Fashola move about in Lagos without driving everyone crazy with siren as his counterparts were wont to do. Another person would write an article about how genuinely astounded he was to espy a pile of books in Fashola’s official car, and how pleased he was to encounter a Nigerian politician who reads!

Then, there was the media, most of whose bureaus were domiciled in Fashola’s domain. They picked up the public vibe and gave it resonance. It was all understandable. At that time, Nigeria had just outlived the boorish government of Olusegun Obasanjo, whose third-term agenda had not only collapsed but who had also been replaced by the bland Umaru Yar’Adua. Fashola epitomised collective desire to have a leader who represented Nigeria’s future rather than the deadwood that always haunt the country. He was so venerated his popularity unsettled his godfather.

“Fashola is working” was the most popular anthem in Lagos and beyond. It was an intonation people readily picked up, not because it correlated with their reality, but because it was trendy. If you asked them what exactly Fashola had done that improved their lives as individuals, they could barely put their finger to it. Lagos improved under his watch but only marginally. It was still a mega slum yet people chorused “Fashola is working” as if they lived in Dubai. They were convinced about his potential, and faith upheld their hope that we could breed a crop of leaders that would work on our behalf.

There have been many reasons adduced for the All Progressives Congress electoral success in 2015, but I do not think we give enough credit to how much Fashola’s engineered image contributed to their victory. His administrative success had been hyped to the point that people who were undecided about voting a military dictator like Muhammadu Buhari elected to give him a chance when they saw Fashola on his campaign trail. They reasoned that Buhari’s absolute lack of knowledge or strategy would be overridden if brilliant leaders like Fashola were on his team.

When Buhari himself got into power, he did something unprecedented: he handed over three key ministries – Power, Housing, and Works – to Fashola. Looking back now, that was the moment it should have registered to us all that Buhari must be the laziest President in the world. I am not talking about just mental laziness, but a physical one as well. Buhari wanted to be president, but he did not want to do the hard work. Like a pupil handing over his homework to his brilliant classmate, he gave the hardest part of his job to Fashola hoping he would perform the same magic as he putatively did in Lagos.

Unfortunately, Fashola has not lived up to the hype. The factors that helped his ministry back in Lagos have long receded, and poor Fashola has unravelled. He not only became an excuse machine; he responds to legitimate interrogations with testiness and impatience. Now, he even wants the media to continue to indulge him like they did when he was in Lagos. He forgets he is being judged by a different set of expectations now. If newsmen do for him again what they did while he was in an opposition party, they would not be inspiring hope in the populace. They would be denying reality.

Before Fashola talked about roads and hope in the country, he had an interview with Maupe Ogun-Yusuf of ChannelsTV where he intoned pretty much the same rhetoric about reporting the good and the bad in Nigeria with a balance so that people would have hope. He is consistent in his convictions even though he fails to clarify how promoting and projecting our country in a positive light will transform the reality of multi-dimensional poverty that assails us.

At some point, Fashola gave an example of the changes that have occurred in our living conditions and which we need to take cognisance of to encourage ourselves. He said when he became governor, the security situation was terrible in Lagos and not a single traffic light was working. But today? There are traffic lights. People so take their existence for granted that they now complain when those lights do not work. I was considerably sobered after listening to that. Fashola became governor in 2007, and in the 12 years that have passed since then, his measure of progress ranged from non-existent traffic light to dysfunctional ones. Really?

People were right to take him up on his statement that Nigerian roads were not as bad as portrayed. Yet, even if Fashola was right that only 15 per cent portion of the roads were bad, he is still wrong. A stretch of road that is only 85 per cent good is still 100 per cent bad because the remaining 15 per cent that he wants to shrug off could be one’s death trap. To whom do percentages matter when you are dead or dismembered in an accident? It seems that our beloved Fashola has developed a mindset that now valourises mediocrity and passes it off as patriotism. It is not what the media says about Nigeria that gives people hope about the country; it is what the leaders do. You cannot have a country where the President jets out for medical treatment while the rest of the country, crammed into underfunded hospitals, find hope because a journalist writes a so-called balanced story about the government.

Fashola’s trajectory makes me worry about Nigeria’s leadership future. We are not a country that can draw our leaders from a nurtured pool of promising, youthful, brilliant, and charismatic leaders. There are relatively a few people who qualify as leadership material. One of them was Fashola, but unfortunately he has become the very thing we wanted to prevent when we made him an idol.