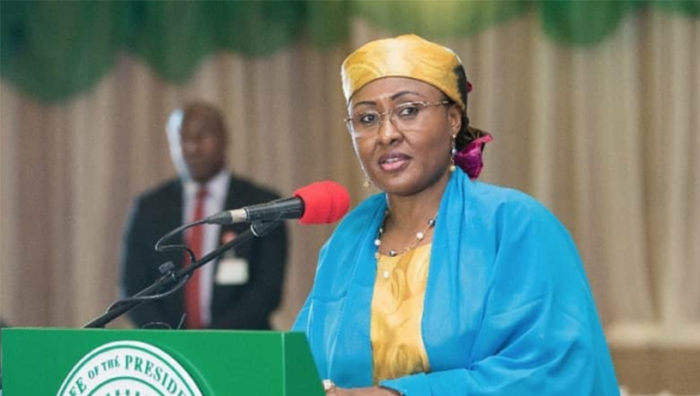 AISHA Buhari, Nigeria’s First Lady, makes a rousing recourse to moral nature. By urging parents to see to the moral upbringing of their wards, she addresses Nigeria’s supreme pestilence, our moral problem. Nobody pays attention to this. Save a paltry few in the country’s performance theatre, whose chief intent is usually to grandstand or pay lip service as a rite of artifice.

Whether Aisha’s recourse is bland performance or not, her acknowledgement of the nation’s moral canker is noteworthy.

Mrs. Buhari challenged parents to take charge of their families and ensure good moral upbringing of children to minimise crime in the society. She gave the advice on Monday while hosting a special prayer session for Nigeria, at the Banquet Hall of the Presidential Villa, Abuja.

Aisha said the lack of moral upbringing of children and the collapse of family values was largely responsible for the social crises facing Nigeria. She, however, fell short of identifying her generation and that of her husband, President Muhammadu Buhari, as one of the country’s afflictions.

Save occasional spasms and pretensions to high ethics, there is little the younger generation can imbibe as moral fibre from their ruling class.

Nigeria cannot escape impending doom until we modify our attitude towards nationhood. But first, we have to build character. Character is the spool by which we would spin the colourful yarns of citizenship and leadership.

It is an artificial construction, no doubt. Our defense against animalism. Without character, we would get ship-wrecked in the barbarous deep that it is nature, or animal instinct, if you like.

It was a lack of character that afflicted us with the incumbent ruling class. It’s poetic irony, therefore, that Aisha would recommend to us a remedy to rid Nigeria of afflictions constituted by her class.

Fear is the next pandemic; many commit crimes and die in fear of poverty and financial insecurity thus our afflictions by Boko Haram, career kidnappers, murderous herdsmen, trigger happy policemen, soldiers and vigilante groups.

Amid the blooming dystopia, Aisha rose from her chambers to mastermind a rite of redemption. Perhaps she meant to cast spells to lull the punishing elements. But then, she understands that presidential chants and paternosters won’t rid Nigeria of her current afflictions.

The battle must begin at the home-front. A cursory look at our families excites the creepiest form of marvel. The Nigerian family unit today parades the worst form of savagery. Parents contract marabouts, Christian prophets and native doctors to invoke God’s mercies and protection on their wards engaged in cyber-scams (Yahoo-Yahoo) and prostitution at home and abroad.

The indoctrination starts quite early, from childhood. Mothers are mightily pleased to see a child hurt an annoying neighbour’s dog or cat; and fathers consider it a mark of martial spirit to see their son tyrannise his weaker peer.

Lest we forget those whose parents raise righteously, breeding them in cages of holiness, to perpetuate the worst forms of bigotry and inhumanity, according to the scriptures.

Many parents consider it a sign of great courage and astuteness to see their wards cheat and oppress their peer. It gladdens their hearts to see their little children evolve into ‘lovable’ brutes at a tender age. They appreciate it as a worthy demeanour for the very tough world out there.

Thus from adolescence through adulthood, they greet every dishonesty their children perpetrate with cheer, as long as it translates to stupendous wealth, higher status and the comfort of knowing that such children are “smart” and inured to the ways of the world.

These are the true seeds and roots of cruelty, tyranny and treason. Parents nurture vile in their wards, who perpetuate through lineages, grosser forms of grotesqueness.

It starts from the very little things, like teaching children to cheat through school. Hence the multitude of “peaceful, hardworking and God-fearing” families engaged in desperate pursuits to enroll their wards and university hopefuls in “special coaching schools” while they purchase for them, seats at “special centres,” as they write the S.S.C.E and JAMB exams.

Such wards, who had been trained to circumvent the straight, moral path to success eventually mature into foetal adults. All through their lives, they navigate challenges and shoals of reality with the courage of a weevil and the wit of a hyena.

The seeds of indolence and bestiality sown in them, grow to prodigious bulk, cultivated by society, codified as custom. Eventually, we have brutes and savages running our lives and determining our future.

Many may dispute this, claiming that such characters constitute a minor fraction of the country’s 190 million population. I whole-heartedly disagree, but if they insist, I hereby iterate that such wonderful families we have now that blessed us with the current ruling class, thieving bank chiefs and corrupt law enforcers.

One degeneracy gravitates into the other and we have for ourselves, a nation of finely bred brutes and foetal adults programmed to self-destruct.

The argument that it’s the lack of good leadership that breeds corruption does not hold much substance anymore. Let each one of us be accountable for his or her actions.

Bestiality, like blood, runs in the veins of both the government and the governed. Age and experience have lost good measure and our old have no important advice to give to our young anymore. Their experiences have been so partial and fraught with fraudulence that at the end, they pass off as miserable failures.

Every Nigerian is a law breaker. The rich believe they are above the law and the poor believe they could sneak under it or wiggle through it and away from its grasp.

While it may be easy to dismiss Mrs. Buhari’s supplication conference as yet another religious show-boating, her recourse to moral instruction is worthy of attention.

Aisha urges parents to instil good morals in their children but the same parents constitute the rich lobbyists conniving with her ruling class to impoverish Nigeria further. They are the poor folk cursing the times and her ruling class even as they vie daily to serve the whims of the same class.

They are the parents purchasing seats and liberties to cheat for their wards at JAMB and SSCE “special centres.” They are the bankers pilfering our accounts at 50 kobo, N50 to N5000 by the second.

They are the motorists hastening off their appropriate lanes to face oncoming vehicles and endanger lives. They are the public administrators stealing pension fund meant for elderly retirees and using same money to fund presidential candidates at national elections.

They are the journalists receiving money to doctor and tilt stories according to the whims of shady politicians and the dangerous business class.

They are the lawyers twisting the law to serve the whims of Nigeria’s worst criminals ever. They are reading this thinking the writer is just another ‘grifter’ calling the con-artist, ‘fraud.’