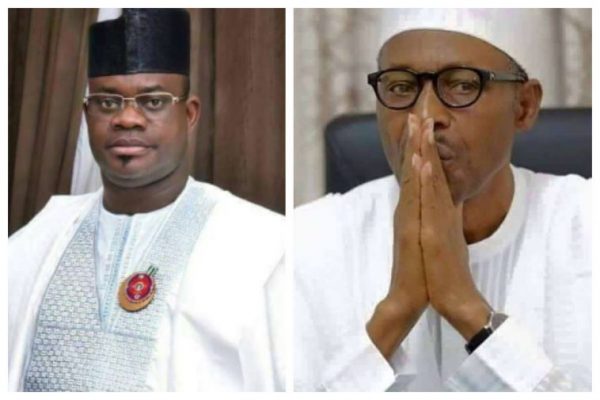 The All Progressives Congress, APC is worried that President Muhammadu Buhari has not yet congratulated Governor Yahaya Bello of Kogi State since he won the governorship primary election of the party held last week Thursday in Lokoja, the state capital.

Since last week, President Buhari has not made any statement about the election said to be “fraudulent” by many of the aspirants and observers.

Many thought that he would say something after he returned from Japan a few days ago, but has kept silent.

Bello was the only one on the field during the election because eight other aspirants who were in the race walked out of the Confluence Stadium, Lokoja, when they sensed it was not going to be free and fair.

He polled 3,224 votes to emerge the winner. One of the aspirants, Babatunde Irukera said the election was fraught with irregularities, adding that the exercise fell short of acceptable norms.

Another aspirant, Hassan Bewa staged a walk out from the venue of the primary, alleging that the primary had been compromised.

Alhaji Yakubu Mohammed one of the aspirants, said what transpired in Lokoja undermined acceptable democratic practice, saying the aspirants were kept in the dark. “We were not given the list of delegates; we were also not given clearance certificate to show that we would be part of the process. This is a disgrace to Kogi State. “In fact, there was no communication between the national headquarters of the party and the aspirants; we have never had it so low in Kogi.

Asked if he will go to court, Mohammed said, “I am not going to any court; I will leave them with their shame but the national headquarters should do the needful to save the party.”

Many would have expected the President to send a congratulatory message to Governor Bello. The governor who is known to frequent Aso Rock took a picture with Buhari as soon as he acquired the N22.5 million APC nomination form two months ago. Buhari was also seen with the picture of Bello’s form in his hands.

The ticket which is a lot bigger than the nomination form has not in any way sparked any reaction, neither has Bello taken advantage of it as usual.

According to a reliable source, Buhari is not happy with the way the election was conducted. His instruction before he left for Japan was for the party to pick the most qualified candidate as far as numerical strength in the state is concerned.

A chieftain of APC in Abuja who pleaded for anonymity said, “Left to us, we would not have supported Bello. But Buhari’s body language before he traveled suggested that he was for Bello. Now that he has returned, he does not seem to be impressed. We are confused.

“He may have been briefed about the process and also the fact that Bello will be difficult to seLl to the electorate, hence the change of mood. This is a problem that has to be resolved as soon as possible.”

The trouble for APC now is that Bello is not popular enough to defeat Musa Wada who on Wednesday emerged Peoples Democratic Party’s candidate. To compound his problem, most of the top APC members in the state are not ready to work for his re-election.

Apart from the fact that many feel he does not deserve a second term due to his performance in his first term, he is from Kogi Central, a minority ethnic group (Ebira).

Since the creation of Kogi State in 1991, no one from a minority ethnic group has defeated a candidate from Igala land (Kogi East).