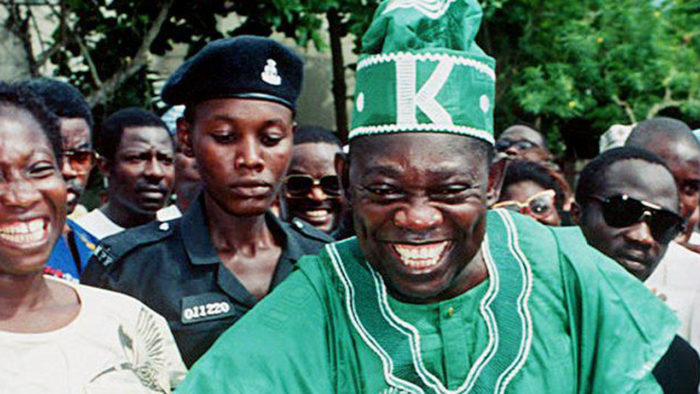 Today marks the beginning of the celebration of Democracy Day on June 12. After about 25 years of ceaseless clamouring for the federal government to declare June 12 a national public holiday in honour of M.K.O Abiola almost to no avail, majority of Nigerians were astounded this time last year when, as if from the blues, President Muhammadu Buhari, formerly an unapologetic military dictator now a converted democrat, publicly recognised the injustice of the annulled June 12 election and took the bold and unprecedented step to rectify it.

So today has replaced May 29 as Democracy Day, which perhaps explains the lacklustre inauguration of the president some two weeks ago to commence his second term of office without the necessary pomp and panoply. Not even a word to fellow citizens, something to rouse them to a new sense of direction and some frenzy of patriotism.

May 29 has joined October 1, the country’s anniversary of independence, as mere footnotes in the national calendar. The debasing of the two hitherto very significant dates in our life is symptomatic of the honour we have decided to give to June 12 as a watershed in our democratic trajectory. For the first time we have had an unbroken 20 years of democratic practice, despite some of its glaring imperfections and some of its failures and foibles not to add the chicanery of its adherents.

But are they really its adherents? Some people will tell you to your face that we have democracy today without democrats. But that is beside the point. The fact is, mercifully, there are no gun-toting men on horseback, dictating the tune and running the affairs of the country. Today we can argue and debate and disagree, up to some point. Even in the media, especially in the unregulated social media, this democracy permits some licence to libel and defame and peddle obviously vile and pernicious wild rumour that can set the country ablaze.

We also have a handful of those who believe that this democracy is not complete without the free for all display of the power of the AK 47 by armed gangs going by the fearful nomenclature of bandits and kidnappers at home and on the highways and even at polling booths.

We also tend to believe that this current democracy can profit from some large dose of impunity and the impudence of reckless power, some bit of autocracy with some fascism looming large in many states. But this day, without any iota of doubt, is M.K.O Abiola’s day of glory. It is akin to Martin Luther King’s national holiday in America. Abiola is the single most important architect of the modern democracy. He won the June 12 presidential election in 1993 fair and square. But it was annulled. In pursuit of his mandate, he made the supreme sacrifice. The struggle to actualise that mandate, prolonged and sometimes vicious, eventually resulted in the return to democratic dispensation on May 29 1999 with political power ceded to the South West, the home region of Abiola.

That this democracy has endured for two decades and still counting is a testimony to the fact God has a hand in our affairs, despite our own obvious weaknesses and failures. But what lessons do we learn from the life and times of this great man, a true legend of our time?

As president Buhari said last year, we must all resolve to avoid the situation that led to the June 12 election fiasco. To do that we must all learn to live and play by the rules of the game. We must avoid a repeat of the litany of election inconclusiveness that we witnessed in the last elections.

Abiola might not have been a perfect human being or a perfect politician for that matter but his world views and personal examples synchronised very well with the true dictates of democracy and good governance with a premium on the well-being of the people.

Abiola left a legacy worthy of emulation by today’s leaders. His broad-mindedness was exceptional. So was his quality and practice of regarding every Nigerian, irrespective of ethnicity and religion, as a fellow compatriot worthy of trust and empathy. He was a true believer of merit and one’s worth, always inclined to give another man the benefit of the doubt.

As I wrote on this page last year, Abiola might not have become president but his larger than life image came from his ability to triumph over base and primordial sentiments and an incredible sense of fellow feeling. I concluded that pen-portrait of this incredible Nigerian by saying he might not have been a very good politician – considering how very good Nigerian politicians are – he was definitely a good humanist, a man of the world who was courted by the high and the mighty.

Abiola, upclose
Very well known to the public is the fact that the man M.K.O was a typical grass- to- grace phenomenon. He was never shy to tell whoever cared to listen that like many Nigerians of modest background, he was born into abject poverty. Born on August 24 1937 in Abeokuta, Ogun State, Moshood Kashimawo Olawale Abiola was the 23rd child of his father, Alhaji Alao Salawu Adenekan Abiola.

M.K.O, the brand that would later take the world by storm, was the first child of his father to survive, the first 22 having either died at birth or before they turned one year. His father, not one to succumb easily to fate, christened the new born-child Kashimawo – roughly translated to mean let’s wait and see.

His father lived long enough to see his son grow through poverty – drumming and dancing to pay school fees – to wealth, becoming the first Blackman to rise as the executive vice-president of ITT world-wide.  Though he was stupendously rich, he did not allow that to enter his head. Philanthropy defined his life. He believed that the more he gave the more he had. But this man of legendry wealth was not unaware of his limitations. He had occasion to say: “I cannot give everybody money. I wish I could. And If I could, I would but I couldn’t. But I can give hope” And that was more lasting. The hope that Abiola gave was not the type given to Tantalus, unattainable, a mere mirage or a will-o’- de wisp.  It was the hope that Nigerians missed by not having an Abiola presidency. What Nigerians missed also was his human touch, an incredible sense of empathy, feeling for others.

Though he could be brash when occasion called for it, but he couldn’t bear to see a fellow human being suffer. When there was a task to be performed he brooked no obstacle. No hurdle was too much for him to scale.

Now I ask: how many of our big men today would willingly give out their official cars to their paid staff to use on official assignment? Abiola would tell his captain to ferry any of his editors in his private jet for an assignment outside Lagos.  I am an eye witness to his humility. On one occasion, I had the luxury of being flown, all alone, in his private jet to represent him at Enugu and, on another occasion, being flown with Dele Giwa, just the two of us, to attend a function in Abuja. That was the legend called M.K.O.