Home Columnist For those who will vote neither Buhari nor Atiku – By Abimbola... 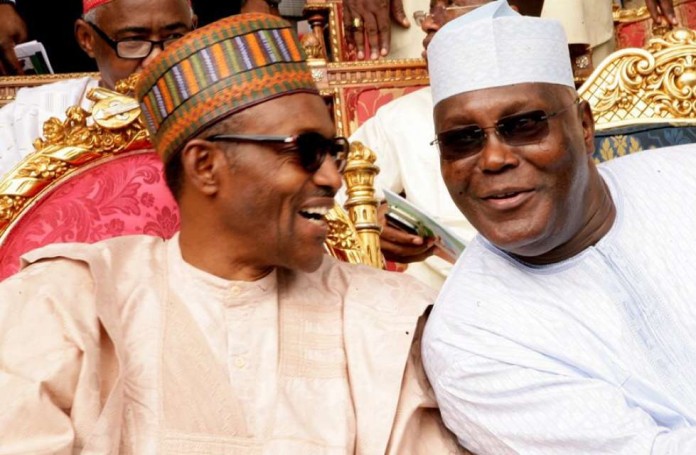 Some days ago, a joke circulated on social media and like jokes are wont to do, they satirise the truth of a social situation. The composer claimed to have eaten two Permanent Voter Cards: one belonging to a friend, and the other to ‘bae.’ The grouse? The friend would have voted for Buhari and the ‘bae’ for Atiku!

Shortly before, the Nobel laureate, Wole Soyinka, had expressed similar feelings of “neithersiderism” on the coming election. His voice, I believe, echoes the frustration of many others who are just as jaded by the electioneering and are not going to vote either the All Progressives Congress candidate and incumbent President, Muhammadu Buhari or his main contender of the Peoples Democratic Party, Atiku Abubakar. This silent – or silenced – majority perhaps agree with him that it is “time for a totally new direction,” and we should not have to be permanently stuck between the twin towers of the APC and the PDP. Soyinka went to hint that some coalition groups were meeting to produce a consensus candidate who would represent a radical divergence from the unbearable weight of the existing order.

In 2015, “new direction” was my desire too. I had hoped we would stop recycling deadwoods and progress to the point where we would get to choose between at least two well-matched stellar candidates. I was tired of being urged to choose “the lesser evil” between two insufferable candidates, neither one barely distinguishable in either personality or ideology. I am not alone; many people out there feel the same way too. It has been hard to gauge the ethical and social imperatives that have been driving this lacklustre election, but one can surmise that this season’s elections will probably be the worst Nigeria has ever experienced regarding voter apathy. Many people, convinced that neither the APC nor the PDP holds any tangible promise to improve on their lot, will sit it out. Apart from those who have not even bothered to register for the elections, there are those who collected their PVCs but will not vote. Alternatively, they might go vote only if they are mobilised for a fee. In short, these elections might be most underwhelming.

We truly need an entirely new direction but in advocating for it, we also need to get over the myth that a presidential victory outside the duopoly of the APC and the PDP will represent a radical change in the Nigerian political history. If by some miracle, any of the third-party presidential candidates should win this election based on their popularity or the weight of their ideas, they will be confronted with insalubrious post-election realities that will shake them out of their idealism. For one, to be effective, such a President will need the legislature to be effective.

Considering that not more than one other party currently has a seat in the National Assembly outside the APC and PDP, the President will be faced with the option of either bending over backward to their whims or, winning them – with their corruption warts and all – into their party. The lack of ideological anchoring in our polity makes defection between the major parties extremely fluid. By May 29, half of the APC and the PDP would have emptied into the winning party, and we would have realised that we had merely poured the same old wine into a new bottle. Within a year, the leader who represents the “totally new direction” would have been stripped of their idealism and begin to reproduce the same habit of corruption and incompetence that imperilled their predecessors.

Then there is also the question of whether Nigerians are ready to stake their votes on an untested candidate.

Most Nigerians probably like the idea of a third party but then, they have been Nigerian for long enough to invest in its possibility. In our society where only a few idealists vote ideas and ideology, people are reluctant to risk their votes to support candidates who might not overcome the many structural barriers that stand in their way. They are probably right that nobody outside the APC and the PDP has a chance of victory. Nigeria has no political party in the classical sense but collectives of loud men and women who pimp for godfathers. How many Nigerians are both due-paying and card-carrying members of any political party? For all the imperfections of the 1st Republic, the parties at least had dues paying card carrying members and not a rabble of perennial defectors who are easily swayed by ‘stomach infrastructure.’

Let’s face it, the candidates of parties outside the APC and the PDP do not have the charisma to ignite popular support by the masses who will spurn entrenched interests on their behalf. They also lack the cache of wealth that politicians sink into creating “structural support” at the local level, and they are equally suspected to be running for office merely to amass enough support that can be used to negotiate a political appointment. Even the voting landscape is barely encouraging for those seeking more radical options. We are suffocated with countless candidates, many of them the disaffected minority and political orphans from the major parties merely look for an alternative platform to test their popularity. The idea of a third party might catch on if all those outside the APC/PDP structure coalesce around a singular platform rather than be so extremely diffused to be significant.

By now, every realistic person also knows that what wins an election in Nigeria is not the mere persona of the candidate or their ability to summon large crowds to campaign grounds, but their political structures. When Nigerian politicians talk about “structure,” they mean the pyramidal voting blocs that are organised by political vassals from the grass roots level upwards. This structure is why politicians have serially courted the APC national leader, Bola Tinubu. In 2011, it was the joker that guaranteed Dr. Goodluck Jonathan’s presidential victory and in 2015, it was also the joker used against him. This “structure” is why Tinubu is once again relevant after he had been “thrashed” by Buhari in the wake of the 2015 elections. Now salvaged back into relevance after his time out, his campaign for Buhari carries a sense of urgency. There is the fundamental necessity to be seen as loyal and significant if their party is victorious come February 16.

The idea of a party that will dislodge both the PDP and the APC while offering a breath of fresh air is not an impossibility. It is possible, but achieving it is not going to come because some elite coalition jerry-rigged them into office through the power of their endorsement. Nigeria’s democracy is too complicated – yet too primal – for that kind of surprise.

At this rate, those of us fantasising about victory outside the PDP and the APC will have to do more than vote; we also have to work at building structures that will function as an alternative to what subsists. Then there is the work of mobilising, winning elections, and making a difference at the levels of the local government, state and even national assemblies. By gaining a little ground here and there while justifying public faith, we will perhaps be entrusted with more power. The Presidency, if and when it is eventually won, will be the crowning glory of our hard work, vision, and strategic planning. All of this takes time and effort, but this is the truth as dictated by reality. Unless we begin to build that structure from the ground up too, third parties or force will continue to serve this one purpose: as a moral receptacle for us political purists to drop our votes, and go home with the smug satisfaction that we too have – at least – contributed to the polity by performing our civic duty.