By Anthony A. Kila">
CLOSE

Home Columnist IS ATIKU A LIAR, BUHARI A HYPOCRITE? – By Anthony A. Kila 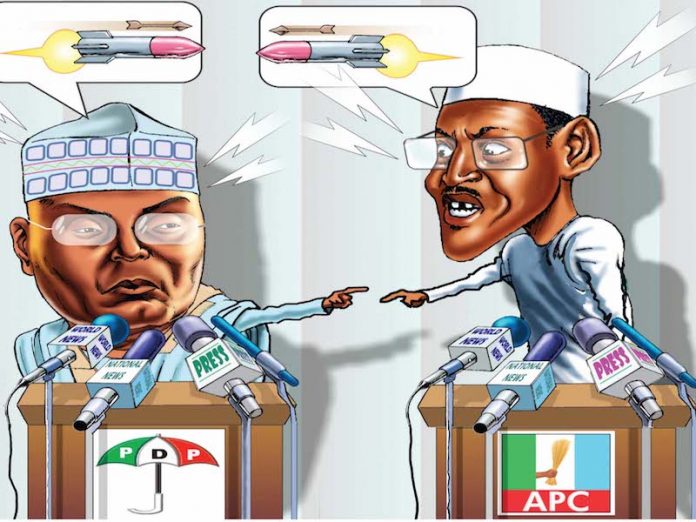 To be precise, these accusations and counter accusations were made by their spokesmen and various surrogates. We note that there is a new vogue in town, since close to four years now: spokesmen now say a lot whilst their principals say very little directly.

The accusations of corruption hovering around the PDP presidential standard bearer Atiku Abubakar is not new. For over 10 years, there had been rumours about Atiku’s not very cleaned hands; there have been tales of indecent and opaque privatization, direct looting and bribery whilst he was in office as vice-president of Nigeria. The biggest tale of course is the one with the American flavour. I deliberately call these allegations tales and rumours because in fairness to Atiku and objectively speaking, no court or committee or report has come out in clear terms to name Atiku guilty or wanted for any crime.

Regardless of what one feels about the man Atiku, his tenure in office as vice-president or his prospect as presidential candidate, one must objectively note that if Atiku is truly a looter then there is something very wrong with our judicial and political system.

A judicial system that hears that a man who has been out of office for over 10 years is a looter and cannot find or does not have within the system a policeman, an EFCC agent or a judge to bring such person to trial for definite conviction or acquittance is not a system in good shape.

Let us not forget that Atiku just like Buhari is a serial presidential aspirant, they have both ran on more than one political platforms. A political system that hears or suspects that a man who has been out of office for over 10 years is a looter and has never denounced him, reported him or even disqualified him from contesting on its political platforms is not a system in good shape.

Thanks to the political system in Nigeria, Atiku’s corruption seems to be like an air-conditioner: its temperature depends on where you stand. It is cool when you are in the room and hot when you are outside the room.

Atiku and indeed his whole team, past and present, too has not helped matters. How can you keep running for president and it has not occurred to you to clarify this matter of corruption once and for all?

Unlike Atiku, Buhari holds the premium prize for being one of the very few Nigerian public office holders that has covered various positions under various administrations and yet can be tagged as “Mr Integrity,” and even allergic to corruption. It is not a small feat and Nigerians really appreciate such achievements. As I have had course to note elsewhere, most Nigerians that voted for Buhari and indeed many of those that campaigned against him did so because they see him as an epitome of anticorruption. The consensus is that the man Buhari, unlike most politicians, is rather averse to corruption and therefore will fight corruption with all his might and that those under and around him will not dare do dodgy things. Any serious analyst will readily tell you that for Nigerians, good a man as Buhari is, he is no Barack Obama and his oratory skills were never his attraction for most Nigerians. Experienced as he is on Nigerian affairs and governance; most Nigerians do not associate him with dynamic and innovative economic policies nor do they associate Buhari with great diplomatic skills: His anticorruption credential is his greatest asset.

And therein lies the rub, as the bard would say, for if what the Atiku and the PDP people are saying has any iota of truth in it and it turns out that Buhari is not Mr Squeaky Clean, then we have a serious problem in our hands. We are not all the same though and reactions to the accusations and counter accusations show where we are and who we are.

The partisan, followers, believers and supporters of political leaders and parties have no problem. For them the messenger is more important that the message. To them anything that comes from the other side is untrue and only tarnishes the image of their hero. To them anything said by the other side is irrelevant for their hero is ever flawless. It won’t matter that a presidential candidate cannot freely travel to the USA or if he never had a certificate he claims to have obtained decades ago.

To the active militants and beneficiaries or agents of political leaders and parties, anything goes. It doesn’t matter if it is true, false, defamatory to a person or group or deleterious to our socio-political system and image. What matter is to find a way to defend and spin the issues to favour their own side and narrative. History means nothing and institutions do not matter to them.

Free unaffiliated citizens and objective analysts do not trust or loathe anyone, they wait to see where the truth lies regardless of who is saying what.

In this zero-sum game of accusations and counter accusations, the two sides cannot be right: Atiku’s camp is either made of desperate liars trying to tarnish Buhari’s image just to show that all politicians are the same or Buhari is a mega hypocrite and conman who in reality is far from what he publicly he stands for.

Eventually history will judge but investigative journalism and law suits against those who make unsubstantiated claims can help us understand in the short term.