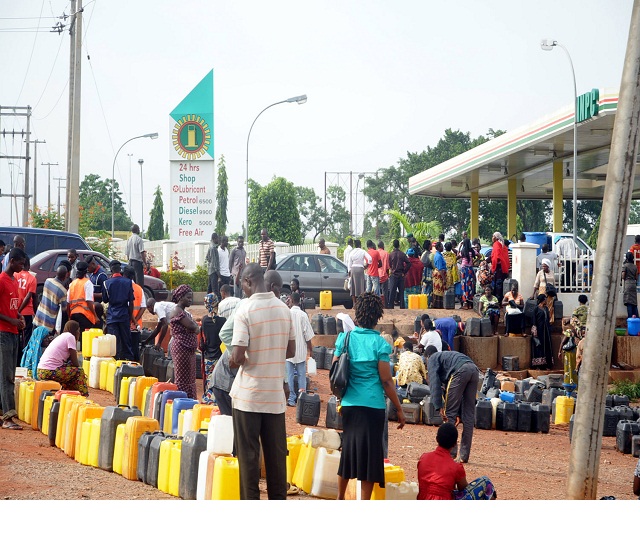 PETROLEUM product Marketers and Depot Owners Associations, gave the government, a seven day ultimatum last week, to redeem their long overdue balance for over N800bn for fuel, already sold at Government regulated price of N145/litre. Petrol Oil marketers give FG seven-day to settle N800b subsidy debts The N800bn, was reportedly consolidated from the difference between government’s regulated price and the actual open market price of petrol sans subsidy; the marketers are also demanding compensation for exchange rate differentials and relief from the extended burden of interest on their bank loans.

Instructively, the open market fuel price in  ECOWAS neighbour Countries is, presently around $1/ litre, i.e. between N305 – N360; this is in place of the regulated price of N145/ litre in Nigeria. The much cheaper petrol price, has expectedly encouraged large scale cross border smuggling of Nigeria’s petrol imports to neighbor nations in the Republics of Benin, Togo, Cameroun, Niger and Chad, and these countries’ economies have, invariably, become significant beneficiaries of Nigeria’s oppressive and distortional petrol subsidy. Consequently, Nigeria may alarmingly be consuming between 50 – 60million litres of petrol daily, rather than the 30million litres /day consumption before Naira was devalued from  N190/$ to N305 to N360/$ in 2017; incidentally NNPC/ CBN management, have never been categorical on the applicable exchange rate for fuel imports.

Nonetheless, Petrol marketers have threatened to cut back on operations with mass lay-off of staff, if government does not quickly save their Companies from shylock creditor banks, which continue to calculate, disenabling double digit interest rates on their overdue loans. However, Nigerians must be concerned that the impasse between marketers, government and banks, will not once again, trigger the severe challenges endured, in unending fuel queues between December 2017 and January 2018. Nevertheless,  NNPC, which has, since become sole importer of petrol, has assured Nigerians of adequate local stock to sustain supply.

Notably, however, even such excess stock may be of little use without adequate operational distribution channels. Ironically, hundreds of billions of Naira already spent on overhauling our refineries, has regrettably, not brought significant relief to domestic fuel supply. The above title “The oppressive folly of fuel subsidy” was first published in May 2015; a summary of that article follows hereafter. “The data released on fuel subsidy outlays from responsible government agencies have, overtime, regrettably remained divergent. The above notwithstanding, what is clear however, is that we are spending a disproportionate amount of Federal budget to fund subsidy payments, of about N500bn or about 10 per cent of annual Federal budgets since 2011.

Incidentally, despite the, severe social deprivations associated with dismal infrastructural deficit, critical sectors such as Education and Health, were never so favoured. Infact, according to the Co-ordinating Minister, subsidy values, which were never captured in annual appropriation bills, have nevertheless been settled ultimately by her Ministry without recourse to Legislative approval as constitutionally required. This tradition of impunity without Legislative consent has been stepped up, with possibly, over N200bn additional commitment which was recklessly incurred this year as penalty for bank interest on delayed payments and exchange rate differentials on a ‘core’ subsidy bill of N40bn according to Thomas Olawore, the Executive Secretary of the Major Petroleum Marketers (see report titled: Daily Subsidy on PMS rises to N1.7bn on Pg. 38 on Punch newspaper edition of April 30, 2015). Ultimately, the oppressive folly of government’s subsidy strategy may become embarrassingly glaring when we become constrained to obtain high priced loans to fund our debilitating subsidy habit. Conversely, however, if subsidy is abolished with the prevailing crude oil price and Naira exchange rate, fuel price will rapidly shoot up to about N150/litre, and ultimately push inflation uncomfortably closer to 10 per cent. Consequently, unless all wages and salaries rise by 10 per cent annually, income earners may lose 50 per cent of the purchasing value of their Naira incomes every five years. Thus, the existing minimum wage of N18000/month, may well become less than N9,000 since it was established in 2011.

Furthermore, consumer demand will contract if inflation spirals and constrain employers of labour  to scale down on their workforce and clearly, worsen the already disenabling rate of unemployment. The incoming administration may predictably seek a truce as usual with Organised Labour to share the burden of subsidy, by raising the current fuel price from  N87 to about N120/litre instead of a market price of about N150/litre without subsidy.

Regrettably, however, this arrangement will collapse as soon as crude oil prices rise above the current $60/barrel and, or the dollar exchange rate rises above N197/$, as such price movement will push deregulated petrol price well beyond N150/litre and create a wider margin of subsidy than the N30/litre earlier projected. Furthermore, if CBN’s rapidly depleting reserves also increase pressure on dollar demand, dollar exchange rate would simultaneously spiral closer to or above the current black market rate of N220=$.

In such event, fuel prices will invariably rise and related subsidy values will again increase to precipitate the usual train of inadequate funding, delayed payments, etc, etc, until a brokered resolution between government and Labour, again sets in motion another cycle of folly with another agreement for partial subsidy in fuel pricing. Sadly, almost 50 per cent of forex earnings will be repatriated to foreign suppliers as payment for the 40m litres fuel imports consumed daily.

Arguably, a huge reduction in such external payments may be possible, if more refineries are built or if at least existing government’s refineries become fully operational. However, even if government refineries, operate at optimal capacity, the ex-local refinery fuel cost will not be significantly different from the f.o.b. prices invoiced by overseas suppliers (+ about 5 per cent freight cost) unless crude oil supplied to local refineries is also subsidized. Thus, whether crude oil prices rise significantly or Naira exchange rate further depreciates, fuel pump price will faithfully spiral uncomfortably to make the accommodation of subsidy inevitable. Besides, until price regulation is abolished, investors will continue to stay away from establishing new domestic refineries because of the challenges of the subsidy scheme. However, savvy investors, such as Dangote, who establish new refineries, would hedge their investments by selling their products strictly in dollars ex-refinery gate to marketers who would still need to source the required forex for their purchases; consequently, the forex outlay for fuel will still remain substantial even if new private refineries are established.

Conversely, however, owners of domestic refineries would readily price their fuel in Naira if the Naira re-establishes a reputation as a safe store of value, rather than a currency that is perennially beleaguered and remains on life support. Instructively, Naira exchange rate will continue its slide and make abolition of subsidy a challenge, so long as our domestic money market remains eternally flush with ever-surplus Naira, which is deliberately created by CBN to chase the rationed dollars auctioned by the same apex bank!