Home Columnist Not too big to fail – By Yakubu Mohammed 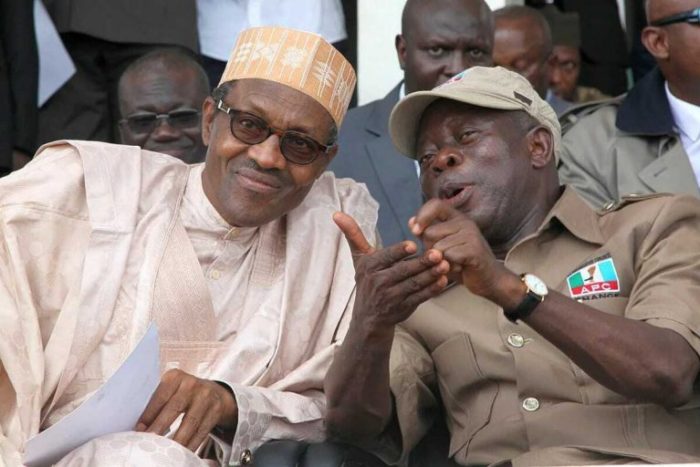 A lot of pushing back is required from the apparatchiks of the ruling All Progressives Congress, APC, if it must avoid the coming to pass of the grim prophecy of one of its own.

Senator Bukar Abba Ibrahim does not appear to me like a flippant person. A three time governor of Yobe State and the senator representing Yobe East Senatorial District, Abba Ibrahim is a founding member of the APC. Given his robust credentials, if he speaks truth to power, he deserves to be listened to. Last weekend he had a reason to voice out his feelings about the goings-on in his party and in the nation at large.

And what he had to say, without mincing words, were not particularly good music to the ears. At a dinner in Abuja to mark his 70th birthday, Senator Abba Ibrahim did some worthwhile introspection and came up with a warning that unless the party changed course, it was heading for a disaster. He said that unlike the 2015 when it was easy to get his people to vote for the party and its presidential candidate, this time the APC would have to do more work to convince the people of the North East to consider voting for it.

“Without mincing words, as an elder statesman, I must say that my dreams and hopes have been dashed. We have certainly not done what I dreamed we would do and in many ways we are no better than the PDP that we sought to displace.” he deadpanned.

But he was not done yet. “As we move towards the elections,” he declared, “I have to give a dire warning to the APC. Things are no longer the way they were in 2015 when we rode to power on a cloud of euphoria believing that things will change. Simply put, things have not changed and many things are worse and the people are bitter. We should not assume that we can win even with massive rigging.”

Senator Abba Ibrahim is the latest voice of worry and caution. But will they listen to him or, as it has become the habit, the goons will go after him with insults and assaults? Will the social media nit-wits, some who traffic in hate speech and fake news spare him, they who cannot make any reasonable distinction between constructive criticism and an attack on their principal or idol which must draw out their irascible and thoughtless bile?

Before Senator Abba Ibrahim, other notable personalities had voiced concern and called for urgent action to avoid a day like this. Before the gale of defections which followed the formation of the reformed APC, Senator Shehu Sani for instance had pointed out that President Buhari’s inability to check the excesses “of those in the command structure of the party”, had led the party astray.

Senator Dino Melaiye had consistently drawn attention of the presidency to the unwholesome developments, especially in Kogi State, developments that would almost inevitably create a set-back for the party and the fortunes of the president in the 2019 election, but because it was Dino, he was laughed to scorn.

The APC, in my view, like its predecessor in office, the Peoples Democratic Party, PDP, must not lay back and think for a moment that it is too big to fail. By no means, it is not. But self-assuredness and overconfidence, like security which is “mortals chiefest enemy” can lead to all sorts of unpredictable consequences.

The change in the air is obvious; but it’s one for the worse. Today, there is a feeling of disappointment. In many local government areas that I am familiar with in Kogi State, for instance, a coalition of disaffected PDP members under no discernible leadership to negotiate their defection into APC threw their weight and the numerical strength of their supporters behind Buhari and other APC candidates in 2015 perceiving them to be agents of change. Their yeoman efforts translated into massive victory for APC at all levels.

But today, four years later, they have nothing to show for it. Nothing from the federal government and nothing from the state government. That is the essence of Senator Abba Ibrahim’s dire warning. Unless the current efforts of its candidate, President Muhammadu Buhari pays off, the APC as a party is obviously headed for a major disappointment. And, to put it mildly, it’s an awful wrong time for a party that is desperate to retain power to present the ugly picture of a divided house.

The primaries to elect the party’s flag bearers for 2019 elections have thrown up an army of angry and aggrieved party men and women. Some of these implacably disenchanted members are strong and powerful enough to rock the boat and, if the push comes to a shove, to pull down the house entirely.

To prevent that from happening, President Buhari has switched to a fire-fighting mode. But he is in a fix too. He will have to come to some understanding with those who seem hell-bent on drawing blood.Some of them want APC chairman, Comrade Adams Oshiomhole out in a lurch because they hold him responsible for their unflattering situation. In the fore-front of this grim battle of survival is Zamfara State Governor Abdul-aziz Yari Abubakar who is in a spectacularly messy situation. With pro-longed inability to hold acceptable primary elections – direct or indirect – the APC in the state missed the opportunity of getting its candidates approved by the Independent National Electoral Commission, INEC.

Unless some miracle happens, Governor Yari and his anointed candidates are out in the cold and they won’t forgive Comrade Oshiomhole for it. But the chairman insists that the right thing was what he did. His stubborn adherence to principles and a commitment to internal democracy have rubbed some iconoclasts the wrong way. He is at logger heads with Imo State Governor Rochas Okorocha who wants to install his son-in-law as governor, primary or no primary. Governor Ibikunle Amosun is finding it difficult to get ticket for Adekunle Akinlade, his preferred candidate for governor. He is equally furious.

At the rear come equally tough and unpredictable political gladiators like Rotimi Akeredolu of Ondo State, Muhammad Jibrilla Bindow of Adamawa State and the stormy petrel of Kaduna State, Governor Nasir El- Rufai, who has had his way by replacing Senator Shehu Sani, the Abuja anointed candidate with Uba Sani, his political adviser. Still not mollified, the irrepressible El-Rufai may still be pushing for the ouster of Comrade Oshiomhole, at least for his temerity.

In this murky business of politics, hell knows no fury like the bruised political potentates whose paths you cross at your own peril. Clearly, even President Buhari – assumed to be the most powerful person on this side of the planet – seems to have conceded to the state governors the divine role of the Alpha and the Omega whose words are law and whose actions are unimpeachable.

It would not be surprising therefore if Comrade Oshiomhole who came to office like a new broom, finds it increasingly difficult if not impossible to make a clean break with the past. Will they, the presumed owners of the party, allow this comrade to fulfil his mandate which is to install internal democracy and restore credibility and decorum in the affairs of the party? His success in this assignment, at this defining moment, will be a true testimony to the will power and the steadfastness of President Buhari. To buckle under now and allow aggrieved governors to kick out the chairman is to signal a lost hope and a lost cause.