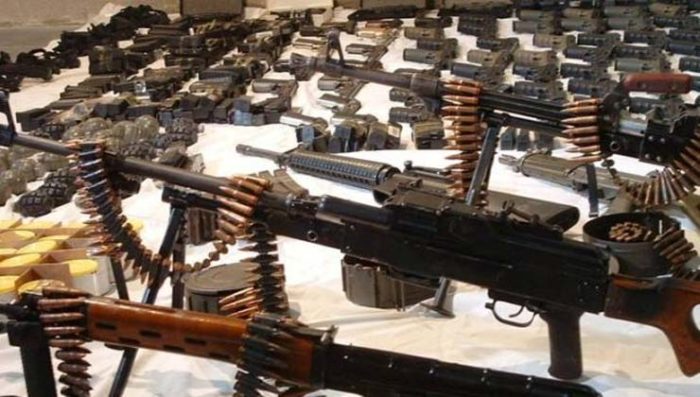 Dear reader, consider this thought-provoking quote: “From records by the United Nations Centre for Peace and Disarmament, I understand that there are approximately 500 million assorted firearms in West Africa. Of these 500 million, 70 per cent, approximating 350 million of them, are in Nigeria”.  The weighty words came from the Minister of Interior, Gen. Abdulrahman Dambazau (retd.), at a high-level meeting on proliferation of small arms and light weapons as well as drug abuse in Nigeria, months back. He declared that this dangerous trend must be checked before the 2019 elections. But truth be told, those who should act and decisively too have not walked the talk. There, the problem lies!

Yet, there is more to worry about. The minister went further to reveal the damning fact that Nigeria’s porous borders contributed to the proliferation of the illegal weapons. According to him, Nigeria has 5,000 kilometres of land and the littoral border, all porous. “With these weapons and drugs smuggled into this country, if we don’t do something now, I am afraid things will be worse than it is now.”  He is right on point.

Perhaps, all these would explain the escalating wave of sundry crimes such as the spate of mindless murders by fully armed killer-herders, kidnapping, armed robbery, cultism and worse still, sectarian conflict  that has reared its ugly head in Kaduna State in recent weeks. By the time we add these horrifying spectacles to the recurring insurgency in the North-East and the supply of weapons, not only by trade-by-barter (with stolen oil), in the Niger-Delta, there is cause for serious concern.

Politicians use these through paid thugs to harass, threaten, coerce political opponents to submission, as reportedly witnessed during the recent re-run governorship election in Osun State.

As yours truly has repeatedly highlighted, desperation for political power and the personalisation of the same in Nigeria are at the heart of the series of clearly avoidable ethno-religious crises bedevilling the nation state till this day. Also to blame are the highly attractive perks of office. These are characterised by obscenely high pay package and the winner-takes-it-all mechanisms that place political appointees as demi-gods to be worshipped by the pauperised populace, rather than serve them. And when might is right, evil thrives, beginning, of course, with the general election.

From records, violence affected more than 120 of the nearly 600 presidential and parliamentary elections held around the world between 1985 and 2005. That is according to the UC Berkeley researcher, Leonardo R. Arriola, who led a Social Science Matrix prospecting seminar focused on “Electoral Violence in Developing Countries”.

Amongst the African countries listed by Sara Birch and Muchlinski, in the Journal of Terrorism and Political Violence, Nigeria leads the pack when it comes to escalating wave of electoral violence. Others are Uganda, Kenya, Zimbabwe, Senegal, Ghana and Tanzania.

The bitter truth of the state of the nation today is that we are more divided than ever before, as opinions of the citizenry are bifurcated along political, ethnic/ religious lines. All of a sudden, not a few members of the ruling party, including the defectors and others have donned on the toga of saints, as if they arrived Nigeria in 2014 from another planet!

Here, impunity rules as king as there is scare regard for the sanctity of human life, as it is for the rule of law. Who cares if the once beloved food basket states have become the theatres of bloodletting?  An elected leader could therefore, appropriate billions of bailouts and monthly allocations from the federation account to feather their nest while the mass of unpaid workers groan on every blessed day in unfathomable agony. Yet, these same people cannot explain what they have done with security vote allocations.

The situation is worsened by the enormous political powers vested in the executive arm of government. And in a weird scenario whereby military dictators of yesterday have suddenly metamorphosed into darlings of democracy today, what we have are the political aberrations that have come to define our experience since 1999.

We should not be surprised therefore, that Nigeria, an enormously blessed country which should be the leading light in the comity of nations, on economic matters, especially on the African  continent, is now home to the world’s poorest people, even as it also stands  ‘tall’ as one of the fastest growing indebted nations. As usual, there are always excuses for failure, either blaming the past governments for our present woes, blaming reports by independent international organisations as inaccurate or calling  for more patience on the part of the traumatised citizenry.

If democracy truly belongs to the people, then all efforts should be geared towards ensuring that the people’s votes count. INEC must be truly independent. The increasing fear is that no matter where the pendulum swings, there may be the devil’s alternative, with a groundswell of protests to trail the results. So, what should we as concerned Nigerians be doing?

It is high time that the coterie of civil society groups, political and public affairs analysts and social commentators said it as it is, by speaking truth to power. That places the burden of sustained political re-engineering on their shoulders. They have to enlighten the citizenry, millions of who know little or nothing of the dictates of democracy, that they indeed should be the drivers of the vehicles of governance. That they should not bow to the pressure of vote-buying even in the presence of mass hunger. That they should not kowtow to the whims and caprices of their so-called elected representatives.

As we raise concerns over the stark revelations of the incubus of insecurity by the Minister of Interior, we urge that more frequent meetings between security forces and state governors, the legislative arm of government, the traditional institutions and NGOs should be sustained.

Nigeria belongs to us all and the time to pull the ship of state from capsizing over the precipice into the stormy waters of inequity, nepotism, tribal bigotry, religious intolerance and political tsunami is now, not tomorrow.