Home Columnist The NYSC as nemesis – By Olatunji Dare 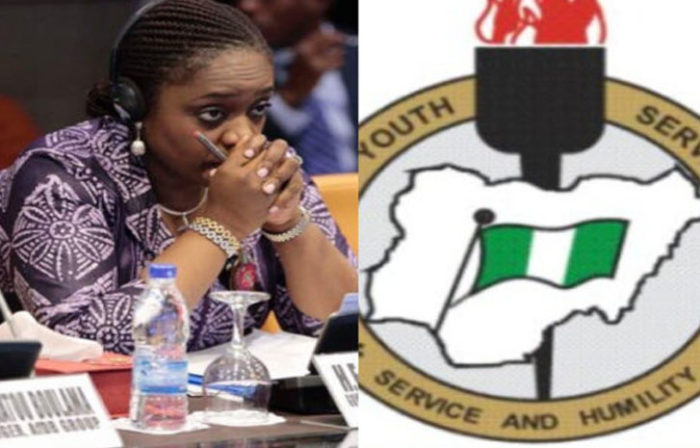 Something revivifying has happened to the National Youth Service Scheme (NYSC).

Just when it was being canvassed that the scheme no longer served any useful purpose beyond supplying cheap and largely indifferent labour and should be scrapped, it caught up with a senior member of the Federal Cabinet and threw the future of another one into uncertainty.

All of a sudden, a beleaguered bureaucracy became the nemesis of the unwary and the wayward.

It began when the online newspaper Premium Times reported that the Minister of Finance (as she then was), Kemi Adeosun, had not fulfilled the one-year mandatory service for graduates under 30 years old, and had secured exemption from it with a forged document.

Repeated day after day with slight variations, the story soon took on the manner of a crusade, especially when Mrs Adeosun declined to be goaded into responding, and President Muhammadu Buhari appeared to show no interest in the matter.

Then, more than a month after the story broke, she resigned, after a full day in the office, and headed straight to the UK, where she had lived for more than 30 years before taking up an appointment in Nigeria.

Unsure as to whether the NYSC law applied to her or not, she explained in her resignation letter, she had turned to those “on ground” for advice.  They had assured her that they would take care of the matter.  Thereafter, they had handed her a certificate of exemption from the NYSC which she had, in  her guilelessness, filed with her confirmation papers as Commissioner for Finance in Ogun State, and later as Minister of Finance.  And in both instances, the authorities had not disputed its authenticity.

From the assertion that the document was a forgery, it was but a short step to declaring that Mrs Adeosun was at least complicit in, if she had not actually committed, a forgery.   And to leave her in      no doubt about the gravity of the situation, they hinted darkly that the penalty on conviction was imprisonment without an option of fine, or both imprisonment and fine.

Her refusal to be drawn into a discussion on the issue was taken as proof of her guilt.  If she was not guilty as charged, it was said, why would she not affirm her innocence?  In the face of such a damning charge, why would she remain silent?

And when she finally explained how she came about the disputed Certificate of Exemption from the NYSC, public condemnation — if one judged by the volume and intensity of reactions in the so-called social media — was so unsparing you would think she had embezzled the nation’s Gross Domestic Product for an entire year.

“She is a hardened criminal,” many proclaimed.  “She must be brought back from the UK and jailed,” others chorused.  The woman who had only 24 hours ago been acknowledged as Minister of Finance of the Federal Republic of Nigeria suddenly became a “Yoroba (sic) thief,” a “Yoro-robber.” The more courteous among her calumniators called her “Calamity Kemi.”   And “Adeosun-gate” became the         latest entry in Nigeria’s bourgeoning vocabulary of corruption.

Yet her explanation is entirely plausible, and not least because it is so artless.

The average Nigerian has been conditioned to believe that he or she cannot get anything done by himself or herself; that, to accomplish anything worthwhile, one has to go through someone who knows the system and how to work it.  The result is what counts.  How it was achieved is the last thing on the mind of the person who stands to profit from the intervention.

Why go through all trouble and the endless wait with no guaranteed outcome when you can engage someone to pursue the matter for you?  And sometimes, it is not even a matter of cash, at least, not upfront.

And so, we turn to agents to help us obtain or renew vehicle licences, passports, driver’s licences, and many other documents that the law obliges us to have.   And we may be landed with fakes without knowing it.

We turn to people within the system and outside to help our children and wards secure admission into secondary school, to meet or exceed the benchmark for matriculation, to secure employment in the banks and oil companies, to be recruited into the armed services, and so on and so forth.

In the process, we have conditioned our children and wards to believe that they do not have what it takes to get anywhere without our intervention. Other parents are intervening for their children in various ways anyway, we reason.  So, why place our children at a competitive disadvantage?

This was precisely the reasoning of the authorities in one of the states who suspended a secondary school principal for preventing his students from cheating in the West African School Certificate Examination.  By that action, they said, he was putting their future at risk.

I am here reminded of the Owosho Certificate Racket that rocked the University of Lagos in the 1973/74 academic year.  Hundreds of students were sent packing overnight, some plucked out of halls where they were writing their final exams and served expulsion notices.  This followed the discovery of discrepancies between their A Level results issued by the West African Examinations Council and the results on which their admissions were based.

He did help, and many of them became undergraduates, with bright and privileged futures ahead of them.  What the help consisted in they did not know.  Perhaps a bending of the rules, a manipulation the deck, but none of them had the faintest idea that the whole thing was criminal through and through.

What happened was that Owosho had pulled out their result slips on file and replaced them with new result slips bearing inflated grades that had been supplied by a confederate at WAEC Headquarters. For candidates awaiting results, the duo just manufactured the grades.

In many cases, it turned out that the grades the applicant subsequently earned at WAEC were superior to those Owosho and his confederate had ginned up.   But students in that category were expelled all the same, on the ground that they had manifested an intent to cheat.

But that intent could not be read into the conduct of all who had gone seeking Owosho’s help.  They had no inkling that his intervention would take the form of a crime.

Until then, I did not even know that one could gain admission to the university by any means other than pure merit. You wrote your exams, mailed in your application from your rural outpost, up-dated it when your exam results were released, and waited for your admission letter to arrive in the post.

But that was long, long ago.

I do not believe Mrs Adeosun had set out deliberately to procure an NYSC Exemption Certificate to which she was not entitled.  I believe she was a victim of her own innocence.  If she knew it was fake, I doubt whether she would have submitted it as part of her confirmation package before the Ogun State Assembly and the Senate, at the risk of being found out.  She stood to lose so much.

In whatever case, the coarse abuse and vulgar name-calling were unwarranted.

These days, thousands merely go through the motions during their service year.  The calumniators should reserve their ire for those corps members who pay their local supervisors to look the other way while they hold down full-time jobs in the cities and show up at month-end to collect their statutory stipends, those who serve out the year in self-employment or family business, those who do not report at all, and the thousands — corps members as well as administrators – who have by their conduct over the years emptied the NYSC of the idealism in which it was conceived.