Home Columnist How will Buhari and Atiku debate corruption? 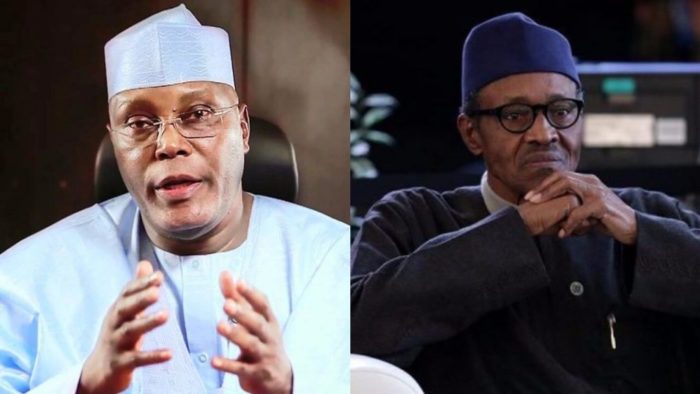 By the question of debate, I do not just mean the televised event where one man stands against his opponent and both make a pitch for the vote of the audience. The debate between the Peoples Democratic Party presidential candidate, Atiku Abubakar, and the All Progressives Congress candidate and incumbent, Muhammadu Buhari, that I refer to is one about the power of impression to contour reality. The popular myth is that Atiku embodies corruption, but that Buhari is pure because of some specious morality that demands his luxuriating in poverty. Going by the frenzied manner Buhari’s media agents are yelling themselves hoarse since Atiku emerged the PDP presidential candidate, trying to warn us about corrupt politicians who could invade the national till if Buhari loses the election, it is obvious Atiku’s victory rattled their camp. In the next few weeks, the noise of “corruption” will rend the air, the din blocking our chances of hearing important issues. Whether his hands are clean or not, Buhari will appear before equity accompanied by his devout followers. What needs to be reiterated to them is that the impelling force of “corruption” has sagged, the message this time round is capability. And no, it is not a matter of sloganeering but a demonstration of it.

When Buhari’s supporters say someone is “corrupt,” what they mean is that unlike Buhari, such a person has money and is not pretending to be suffering. To them, wealth accumulation process strips the soul of all decency and that supposition disqualifies one from any leadership position. They tend towards an extreme where poverty is treated as an aesthetic; a thing of beauty that ennobles the soul. They believe money is useful, but only as far as it services Buhari’s ambitions. That is why no matter how much they bloviate about corruption, their mouths can be momentarily fastened with the question of who funded Buhari’s 2015 election. Their mindset is that the effect of corruption on the polity matters, but only when it is perpetrated by someone outside the approved circle. As such, the issue of anti-corruption fight is one of the most important ones both candidates will face going into 2019, and it is also tricky because there are many false evidence appearing real.

In 2015, Buhari’s main selling point was the anti-corruption agenda, and he was lucky that he had a message that resonated with Nigerians who found the wanton and brazen misdemeanour of the Jonathan years frustrating. At the time, people had grown weary of a government where the nation was getting richer from her extractive industries while their lives remained perpetually abject. They had had it with a government where the President boasted that we are a prosperous nation because we have a political class that flies in private jets. People were done with an administration where terrorists sacked military barracks, soldiers went on strike because they were fighting Boko Haram with empty arsenals and emptier stomachs, while humongous sums were being allocated to defence. They would have no more to do with a government where impunity reigned; where even pastors abandoned pulpits and used their private jets to courier dollars for ungodly errands. The sins of Goodluck Jonathan’s government were overwhelming, and Buhari’s promise of refurbishing our vandalised polity by ridding us of corruption seemed like a breath of fresh air. The trouble is, Nigerians were so desperate for a more competent leader to emerge that they did not ask Buhari to define his idea of corruption or present his strategy to them for a critical evaluation.

Corruption is not always reducible to criminal acts, although Buhari’s idea of it seems unreconstructed from what he thought it to be in 1985. Corruption is multi-faceted; it ranges from abuse of political power to administrative waste, and to people exploiting the loopholes in the system to carry out fraudulent acts with impunity. Corruption is not all about a few bad men who have access to public funds abusing the privilege. If it were that simple, the problem of corruption would have been long solved all over the world. Even in the highly developed countries, corruption has been, and is still, a part of their social and collective history. That should tell us that corruption is a universal human problem and solutions should be approached from that perspective. To confront the problem of corruption, we need to borrow best practices from elsewhere where they have combined technology, the law, and the efficiency that comes with statistical integrity to fight both waste and the human tendency to take what belongs to the collective.

In the coming weeks, particularly when Buhari starts campaigning, his team will hold up his integrity before us although they must know that the times have changed. More of the Nigerians who voted Buhari’s integrity in 2015 now have the hindsight of experience to see his bad faith. We have seen the supposedly saintly President act unperturbed when some of his closest aides were embroiled in corruption scandals. Buhari’s ethos has been repeatedly dissolved when those his party had previously labelled the robbers of the Nigerian patrimony now have a seat at the APC table. When the country slipped on the corruption perceptions index by Transparency International, Buhari’s aides preferred to blame Nigerians for this loss of status. No, they refuse to look inwards and understand that Buhari’s inability to summon the moral courage to confront his own implication in the problem of corruption is a betrayal that demoralises through the ranks. Their stance on anti-corruption barely ever passes the level of self-righteousness.

As for Atiku, the cards are stacked against him for many reasons. Some of the beliefs that he is corrupt have a factual basis, while the others are the fluff generated by the propaganda machine that Olusegun Obasanjo used against him when both men, as President and Vice President, locked horns. The best bet for Nigerians in this knotty situation is not to defend Atiku with the same blind ferocity Buharists resort to defend their dear leader. It is to collective interest if Atiku is allowed to clearly define his understanding of corruption and highlight his strategy for combating it. One thing I am certain of is this: Atiku cannot possibly be more corrupt than any of the other politicians in power today including Buhari himself. The Nigerian political class is grossly unethical but rather than somebody “outsteal” the other, they balance one another out; they fund each other’s elections.

From the moment Atiku picked up the PDP candidature, the campaign started. Corruption and anti-corruption are going to be one of the biggest issues on which he will be interrogated, and the problem is that such obsession might clog other issues that need addressing. Going by how some of Buhari’s media team minders are pushing the question of Atiku’s “corruption” to the public through various media, one can tell that the battle for our votes has already begun. If there is one mistake we should not make, it is not to get hyper-partisan to the point that the candidates are not sufficiently questioned on how they understand corruption, and how they propose to deal with it. They should be able to produce clear strategies with realistic goals achievable within a defined time period,

On a final note, the Atiku vs. Buhari contest is going to be an interesting one for many reasons already elaborated and also for their histories. Both of them spent years jostling to rule Nigeria before Buhari achieved his aim in 2015. Atiku’s bid for the Presidency started as far back as 1992 during the SDP-NRC contests. One of the factors that favoured Buhari was the build-up of anger against Jonathan. Today, the same scenario is being repeated. Just like Jonathan, Buhari got into office accompanied by massive amount of goodwill but frittered everything. Three years after he was sworn in, Buhari has lost many of the voters who joyfully voted for him. It is equally doubtful if he has won over the hearts of others who did not vote for him. Buhari is now at the place where Jonathan was in 2014. When Jonathan saw looming defeat, he began taking a series of missteps that eventually cost him the election. The same can be said of Buhari. The question is if the build-up of momentum against the Buhari candidature is strong enough to sweep him out like it did Jonathan.