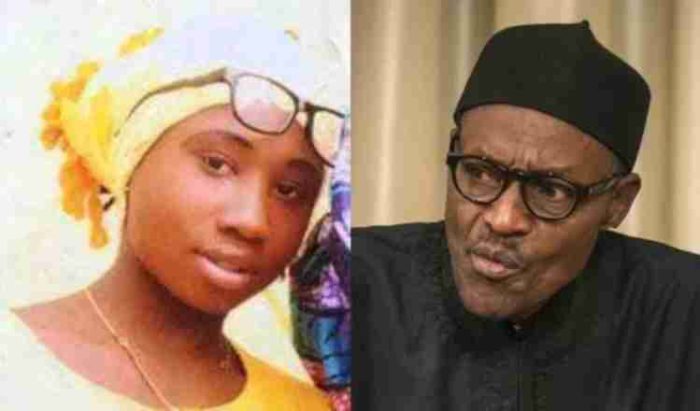 It is time to warn the authorities in Abuja again about the danger of allowing terrorists who have been threatening to kill Leah Sharibu to carry out their threats.

There has been no indication of serious engagement in Abuja, in this regard.

It is all politics of primary elections while neglecting other weightier matters of humanity and governance.

The issue of Leah, the lone Christian captive school girl in the hands of Islamic militant group, Boko Haram, has so touched the hearts in global context that, a Nigerian group in the diaspora has been making efforts to raise money as ransom to secure her release from the heartless abductors.

This is coming on the heels of the threat to kill her and the debate on the payment of ransom for the release 104 kidnapped Dapchi schoolgirls as five of the hapless girls sadly died in captivity.

Some people have been criticising the payment of ransom for the release of kidnapped Dapchi schoolgirls instead of focusing on appealing to the nation’s conscience and encouraging the Federal Government to bring Leah back alive.

The critics of the alleged payment of ransom should realise that the human life involved is more important in the equation.

Therefore, there is no price that is too much to be paid to achieve freedom for the last Dapchi girl in captivity.

It would be recalled that while this Christian girl, still held by Boko Haram terrorists recently in a trending audio message begged President Muhammadu Buhari to come to her rescue.

As usual, Nigerians were told that the government was working on that and assured citizens that she would be back as the government was committed to doing anything to rescue the kidnapped girls, even if it meant paying for their release.

However, the government said that the clip would be verified to be sure that it’s Leah’s voice.

More than a month after that promise, no update on the plight of citizen Leah.

There was a report that her mother had sued military and police authorities about the plight of her defiant daughter.

Curiously, when the Federal Government negotiated the release of the other girls and a boy, it did not verify any voices in an audio message.

Therefore, it is a national embarrassment and a shame to all the duty bearers in this country to tell the world that the government was verifying the voice of someone in distress instead of embarking on rescuing the girl.

Again, why should Leah remind the government to secure her release?

This is in stark opposition to the case of the 12 boys known as Wild Boars who in June went exploring in Thailand’s Chiang Rai Province with their football coach; and ended up trapped deep inside ThamLuang cave, underneath a mountain.

So many things could have gone wrong, but somehow combined efforts of the people and government managed to get the boys out alive.

Notwithstanding, since the political will was there, the rescue team demonstrated courage, determination and focus; and they succeeded.

To handle the many things that could have gone wrong, they collaborated with other countries.

The Americans provided logistics, while British divers navigated the most hazardous stretches.

This is a remarkable story of determination and doggedness – and the length a focused country that has value for human life will go to save lives.

It is a show of commitment and the value placed on human lives in Thailand. If Thailand could do this, then Nigeria can!

As it stands now, time is of the essence because the life of Leah is in imminent danger.

So, we appeal to the president to increase the tempo of the rescue efforts and accept the help, from a group that has offered to help the government pay the ransom; collaborate with other countries and get international rescuers to help until every schoolgirl abducted is accounted for and Boko Haram is conquered.

Although Leah’s mother had cried out again to Buhari to do all within his power to stop the terrorists from carrying out their threat – to kill her daughter and ensure her safe and speedy release, the number one citizen was silent on the issue during the October 1 broadcast to the nation.

Mr. President, Leah is Nigeria’s daughter and the nation’s attention and action concerning her should not be less.

So it is a shame of a country that a Nigeria’s daughter is still held hostage and the government remains ‘mute’ on our nation’s ‘birthday.’

Leah is our daughter and sister, but appears that we are turning blind eyes to her safety.

Mr. President, Nigerians are waiting to say thank you for rescuing Leah and the remaining Chibok schoolgirls alive and for conquering Boko Haram. Certainly, as this newspaper noted, Leah Sharibu’s issue is too sensitive to be left in the realms of miracles.

Similarly, other Nigerian state actors with conscience, should rise up to the situation as the non-release of citizen Leah remains a moral guilt hanging over the Nigerian state’s duty-bearers; and should not be treated like ‘June 12 1993 election,’ where the Federal Government attempted to ‘atone’ for its sins after 25 years.

Buhari should do all that is humanly possible in his government today and put the issue of safety and release of citizen Leah as an issue of urgent national importance.

And so until citizen Leah is safely released, we will continue to ask Nigeria’s leader, where is Leah Sharibu?

Her blood should not be allowed to be part of the stains already in the palms of government of Africa’s most populous nation.