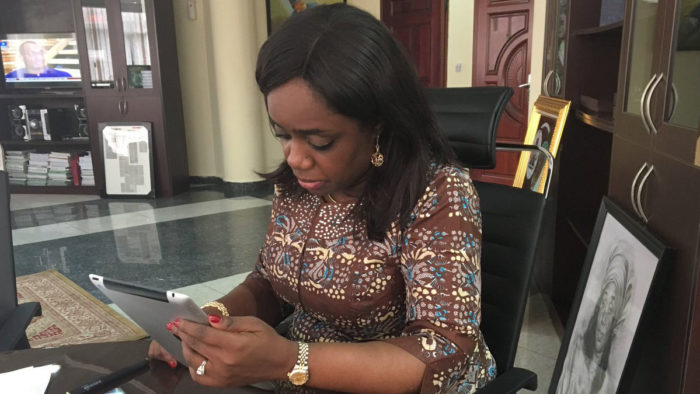 That Kemi Adeosun finally bowed to pressure and resigned as minister of finance last week is not something for her admirers to crow about. She deserves pity but not accolade and perhaps not condemnation.

In Britain, her country of birth where she was brought up, she couldn’t have had the luxury of choosing when to throw in the towel when an allegation of impropriety had been made against her.

But back home in Nigeria, in a typical Nigerian fashion, she had all of sixty something days to dither and to ponder her appropriate line of action because in our own strange way, it was only an allegation made by an online publication even if the authenticity of its report is as clear as the sun in the cloudless sky. She was also cock-sure that in the administration in which she served, there was no clear culture of firing loyal staff even if they are suspected to be neck-deep in official malfeasance.

She therefore stayed put hoping that a serious matter like certificate forgery, the type she was confronted with, would be swept under the carpet. But this one refused to go. This hoping against hope, the type of hope given by Tantalus which proved to be a veritable mirage, Mrs Adeosun ended up prolonging her saga and her agony, enduring sleepless nights while managing to keep a straight face and her good looks, even though sweating and swooning in anxiety.

President Muhammadu Buhari, no matter how sympathetic he wanted to be to his loyal and trusted financial manager and associate, had come under serious pressure to fire her. But he needed incontrovertible evidence, not the one provided generously by the nosy Premium Times, to do the painful job of showing a committed minister of cabinet rank the door into the cold. The waiting game was over for Adeosun, however, after the president had received the report of the inquiry into the NYSC certificate saga and had discovered that all the tongue wagging was not borne out of idle gossip after all.

The truth is that it was true; it had been confirmed beyond all reasonable doubt that the almighty certificate of exemption that enabled her to work in Ogun State as commissioner of finance and for the past three years in Abuja as minister of finance was a dud certificate, not worth the glossy paper on which it was printed and, to boot, possibly with NYSC logo embossed in gold with perverse respectability sans credibility.

Her resignation, if that is what it was, came too late to be honourable. It was supposed to be a kind of soft landing and a face saving bureaucratic contrivance. Meaning she was not fired. Come to think of it, Buhari would naturally be reluctant to fire, not since he became a dyed-in-the wool democrat sworn to uphold all known democratic principles in and out of the book.

Madam Minister resigned honourably after a lot of dithering, victim of her own self-inflicted carelessness. But it is clear that Mrs Adeosun is not a loner and her saga was not exclusively an exception. Inside and outside of government, even in the private sector, especially in the private sector, there are so many Kemi Adeosuns wielding dubious documents either to stay off the scheme, which Itse Sagay said was worthless, or to seek for the elusive employment which even the credibly certificated job seeker can’t hope to get. Her type pollutes and populates even the hallowed chambers of the legislatures across the country, making laws for the nation or pursuing contracts which they would execute poorly or not at all. There is Adeosun in many Nigerians in all walks of life.

The Adeosun saga has again brought out the best and worst in us as a people. As a government, it was convenient to take cover under the provisions of the rule of law which presupposes that an accused person is innocent until proved guilty. The government couldn’t even as much as send Adeosun on suspension while the issue was being investigated. Even if the weight of the allegation was capable of affecting the efficacy of her job, she was allowed to hang on.

Sympathetic colleagues, showing understandable espirit de corps, resorted to double-speak. Some like Sagay extra-judicially cleared her of any misdemeanour because she was doing a great job as minister. With a wave of the hand, he also dismissed the national service scheme as a worthless enterprise because one of their own was caught in the net.

Those who are adept at playing the ethnic card would see ethnicism in all government actions, fair or foul. Kemi Adeosun, according to some postulations by ethnic jingoists in the social media, did not resign because she forged the NYSC certificate. She was forced to quit because she blew anti-corruption whistle against some powerful Northern oligarch.

This illiterate argument makes you to wonder if some of these powerful oligarch from the North had suborned the delectable, well- educated British born sophisticate called Kemi to come to Nigeria when the debate was raging whether or not she was supposed to serve in the NYSC scheme at age 34. And then they made her to believe that at her ripe age of 34 she needed only a certificate of exemption to escape service.

But not having been to NYSC premises, she claimed she didn’t know how they operated there and these Northern oligarchs, trusted associates of Kemi no doubt, went and obtained the exemption certificate with which she was gainfully employed as commissioner and later as minister.

And in case those who want her prosecuted for forgery really mean business, Sister Kemi has a handful of pretenders to the noble profession who are ready and willing to quote, in her defence, some mandarin legal jargons about intention and motive and knowledge and ignorance of her juvenile action. Either she did not intend to cheat by not serving and she got a fake certificate of exemption or she did not have the motive of forging a certificate but ended up forging one or she was ignorant of the law. She said there was a raging debate at the time and because she did not know which side won in the debate, she decided to hold on to any certificate, forged or fake, since she had been assured that on all counts, she would be adjudged not guilty.

In case anybody in government still wants to fritter away the scarce resources of the poverty stricken citizens of this poor country by taking Kemi to court, she would be rest assured that human rights activists armed with the twisted logic of equality of the degree holder and the GCE ordinary level “attempted” before the law would fan out before the judge to decry a situation whereby the said holder of GCE would be allowed to work without serving in the NYSC while the said degree holder, plus diploma and even chartered like Kemi, would not be allowed to work because she has not served. And the constitution has guaranteed the two of them equality before the law, right?

Those who think that I have made up any of the above quoted instances should feel free to consult one Professor Aluko or one of his admirers by name Seye Adetumbi. You would get a free lecture on “mens rea” which is the intent to commit a crime and “actus reus” which is “the action the person takes to perform the criminal act.” Did I hear you say holy of hollies?

And I say, in conclusion, Kemi, you have played your glorious part. By the grace of the Nigerian factor, you’re hereby discharged and acquitted.